“Let’s teach our daughters to expand. To take up space. To express their ideas. To show their strength.” 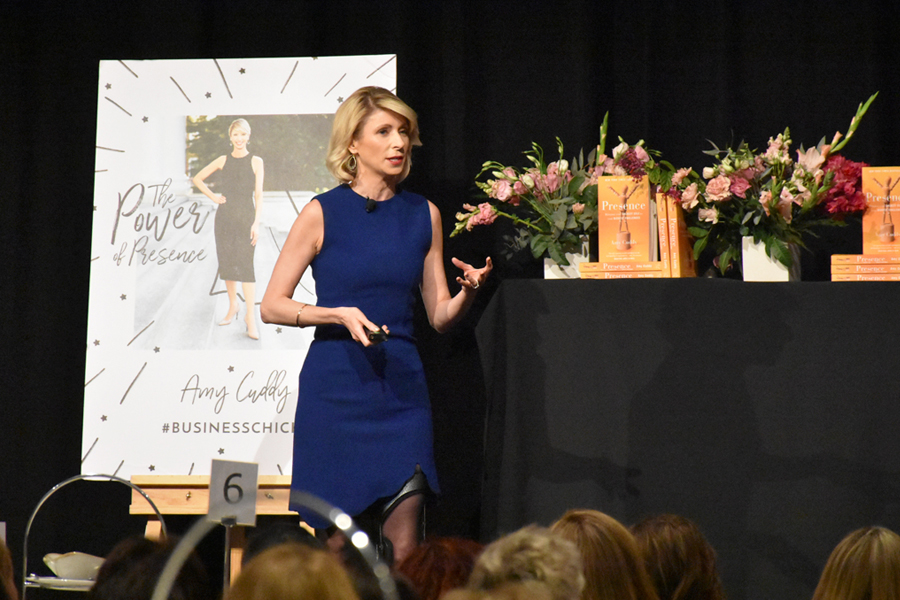 Everyone who attended Amy Cuddy’s sold out workshops around the country took something different away from her incredible 90-minute talk. What resonated with me was her enlightening research into gender bias and at what age young girls perceive themselves to be less powerful than boys.

That age is in between four and six years old.

“At age 5, kids learn gender stereotypes, they don’t start acting on them yet, but they start to know them,” Amy Cuddy said.

“Little girls are running around with their hands in the air, and doing cartwheels, and they’re not afraid to take up space, and to yell and to talk.”

But they get to middle school around 11 years-old and all of a sudden your little girl who was running around with her arms in the air is now a shrinking violet. Boys are not.”

Cuddy and her research team set about finding out if girls were learning this from their environment or if it was innate.

They had four-year, and six-year-olds look at an iPad that had sixteen photos of a pair of dolls. One doll was in an expansive, powerful pose, and one was in a contracted, closed pose.

The research team then asked the children to ‘point to the boy and point to the girl.’ No child said they didn’t understand the question. They flew through this exercise.

“By age 4, 75% of kids showed a male expansive bias, by age 6 it was 85% but more alarming is this number; by age 4 it’s only 13%, who have a perfect score meaning that consistently through the whole survey they think the expansive one is a boy.

“By age 6, that’s nearly half of them. This tells us from a developmental perspective that they are learning this. They’re not born knowing this; we’re exposing them to images and messages that tell them this.”

In Amy’s work, she’s often asked, ‘How do I get women to speak up in the boardroom?’ Her response: “What I say is, ‘Don’t ever tell them to stop.’”

“Don’t tell your daughters to sit like a lady. Do not send them signals that they’re not supposed to speak as much or that they might be seen negatively if they step up and share an idea.”

“Let’s teach our daughters to take up space, and express their ideas by showing their strength, unapologetically. Let’s not stop them from doing that. Let’s teach our kids more broadly because it’s not as if boys don’t struggle with this as well, but we need to teach them to sit up straight, not to respect others but to respect themselves.” 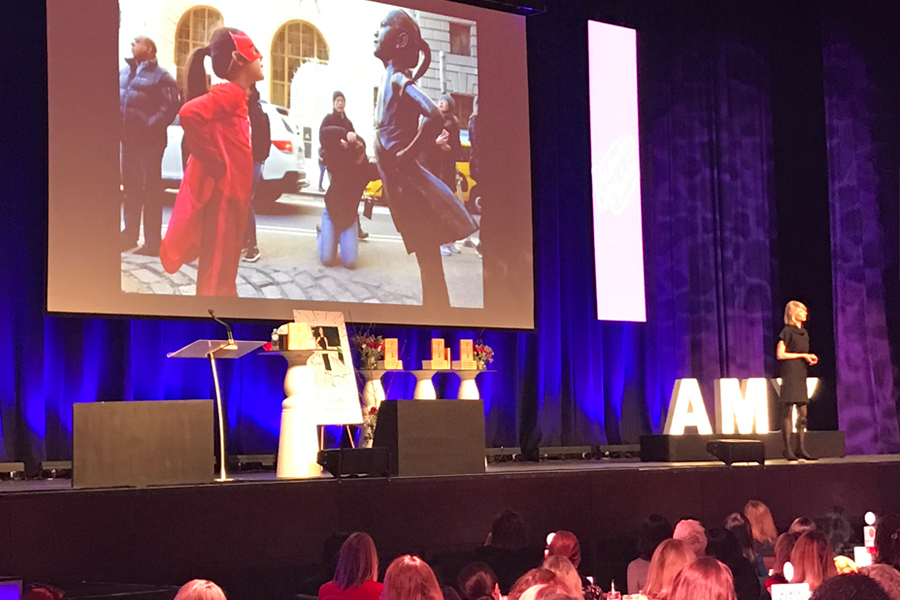 Amy then showed an image (above) of a young girl in a red superhero mask and cape power posing in front of the iconic ‘Fearless Girl’ staring down the bronze bull on Wall St. It is images like these that Amy wants our daughters (and sons) to see.

“I don’t want our daughters to see more princesses with Penguin arms pinned to their sides and a skinny little waist, but let’s more show them you can be strong and poised and beautiful all at the same time.”

She also showed a striking image of ballet dancer Misty Copeland, who made history as the first African American Female Principal Dancer with the prestigious American Ballet Theatre.

“Misty Copeland fought and overcame so many challenges to become Principal, but she kept going because she wanted to show young girls that you do not have to be a toothpick to be beautiful.”

“You can unapologetically carry yourself with grace and power and beauty all at the same time. And that’s what I want our daughters to be seeing.”

“Let’s teach our daughters to expand. To take up space. To express their ideas. To show their strength.”

My daughter is a month away from her sixth birthday. We’re a feminist household, but it’s been a wake-up call to make it a priority that she sees what she can be at this pivotal time in her childhood.

Read more: Amy Cuddy on how to power pose no matter where you are.

Why Amy Cuddy’s TedTalk has been viewed more than 41 million times.