From bags to riches … 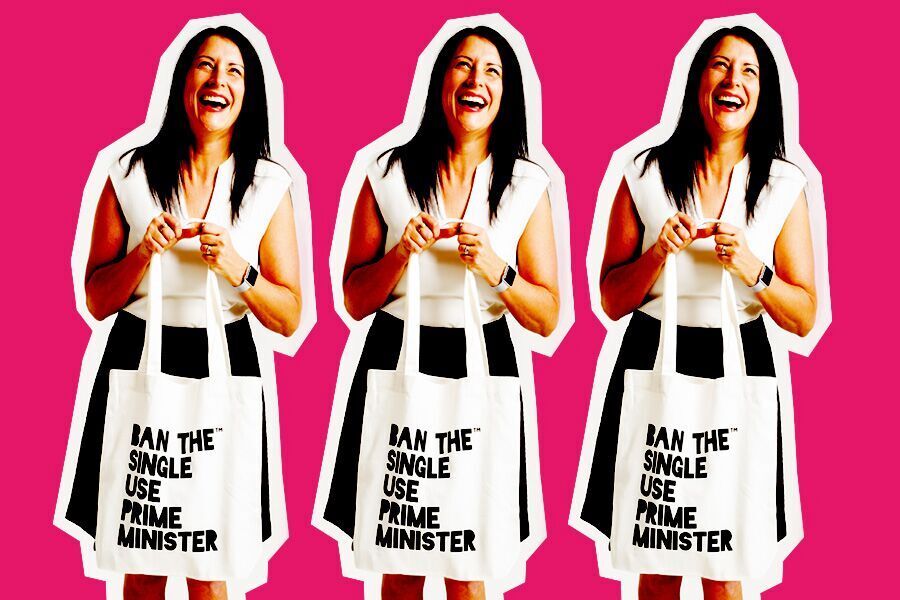 When Sydney designer Gwen Blake created a ‘Ban the single use prime minister’ meme, she had no idea it would almost break the internet. She decided to respond by making it into a product – fast. Here’s her diary of a whirlwind week.

My five-year-old daughter was off school sick, so we settled down on the sofa for the day. She tinkered on her iPad while I watched – gobsmacked – as Malcolm Turnbull lost his job on live TV. Like many Australians, I suspect, I just couldn’t quite fathom what was happening or why we were having yet another elected prime minister removed before our eyes.

My husband, Stephen, was away in Canberra for the weekend with our politics-obsessed eight-year-old old son, while I remained pretty close to the couch with my still-poorly girl. There was a lot of social media traffic about the leadership spill. Jokes and memes were emerging; a typical response from Australians who love a bit of gallows humour.

At my packaging design agency Boxer & Co., we’re constantly looking at local and global trends to stay in tune with consumers. Having just delivered a presentation on the growing shopper support for plastic-free products, I had bags on my mind. I started to think about the irony of how hard Australians had found it to adjust to taking their own bags to the supermarket and yet something like a new prime minister every few years is almost expected. I realised there was a joke in there somewhere but couldn’t quite figure out what it was. I sent a text to my good friend Annabel Crabb, the political journalist, and we traded a few gags about prime ministerial recycling and single-use bags. She tweeted a funny line and I quickly dummied up an image of a bag with the slogan ‘Ban the single use prime minister.’ I shared it as a reply under Annabel’s tweet as well as on my own Facebook and Instagram, and Boxer & Co.’s. I popped out to Luna Park for a couple of hours with my daughter who was feeling better and forgot about social media for a while.

When I got home and looked at my phone, I realised the whole thing had gone completely berserk. Not only had thousands of people shared the image, but also many of them wanted to buy the bag. ‘Where can I get this bag?’, ‘I’ll take 10!’ ‘You HAVE to make this!’. I spent an hour or so hosing them down but then I started to wonder what the hell was stopping me from just doing it. I had the skills, experience and contacts to pull this off, and my closest available business adviser (my five-year-old) was all in favour, so I got to work. I ordered 100 bags from a supplier I’d already worked with, crossing my fingers that I’d be able to retrieve my costs. 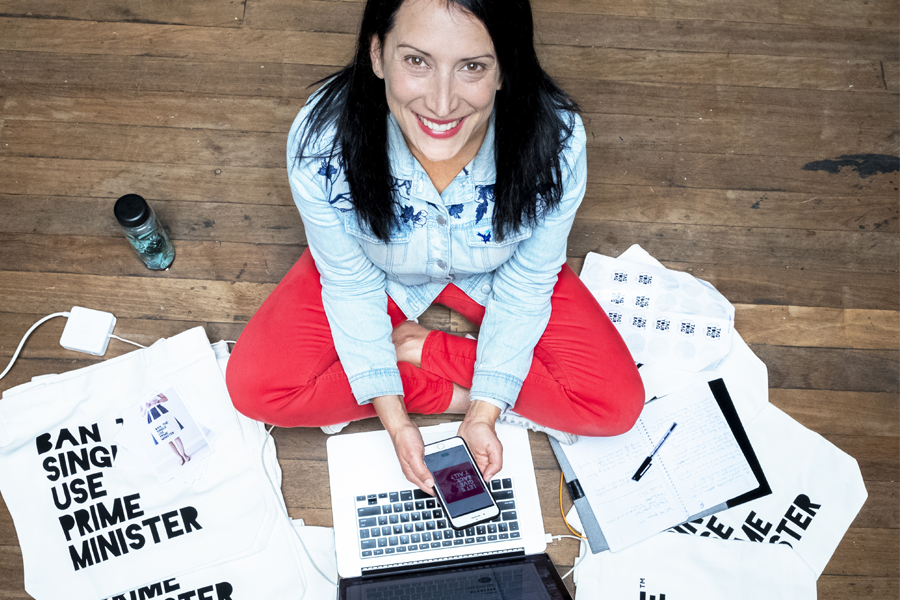 Meanwhile, I had guests for dinner that night. In what might be my greatest multitask ever, I set up my new business while I cooked a dairy-free, gluten-free white-wine chicken and chocolate brownies feast while chatting. I already had an ABN, so I just needed to create a business name and logo, a company Facebook page, an Instagram account and somewhere to sell the bags.

I called my brand Sans Sheriff. (Being the owner of a design agency, I am amused by font-based puns.) I used an app to create my first logo. In fact, I set up pretty much the entire business using just my phone.

I set up a store on Etsy to sell the 100 bags I had ordered. It seemed like the logical place; it was quick and easy to get going and their commission rates seemed fair. My guests left around 10pm and I finalised everything and went live.

When I woke up I saw I’d sold 15 bags, 13 to my friends. I panicked a little at this point. I do have quite a few friends, but not enough to constitute a business model. But then it took off! As the day unfolded, 15 sales turned into 20, then 500. With each hour, more and more people were sharing, commenting, liking and ordering. For a while I could see at least one sale coming through every minute on my phone, which was buzzing like crazy with transactions and notifications. It was impossible for me to keep across everything that was happening on social media. Then the mainstream media interest started. I got a message from Cara Waters, small-business journalist at The Sydney Morning Herald, asking for an interview.

Arriving for work at my agency, Boxer & Co., I shared my weekend story with our awesome team. Some of them had already seen it online; others were freshly baffled and amazed. I contacted my accountant, who quickly registered Sans Sheriff as a legal trading name of the company we already owned.

That day I had interviews with SMH, News.com.au, and ABC Radio Melbourne. Mamamia got in touch, then The Australian. My husband is a photographer, and he shot some photos of me with the bags, which media outlets used.

As sales came in, I amended my bag order twice during the day, settling on an order for 2,000 bags.

This was the day the copycats started springing up. Someone tipped me off to a seller on Etsy that had a replica of my exact bag, font and slogan. I could see they had made sales and was concerned – not only that they were using my idea to make a quick buck, but also that people might buy from them, thinking they had bought from me, and receive a bad service, which would reflect on me. So, I contacted my IP lawyers, Legal Vision, and asked for their help to register ‘Ban The Single Use Prime Minister’ as a trademark. It cost me almost $1,500 to register my slogan in two categories, but that was money I felt was well spent.

I was working all day at Boxer & Co. and coming home and working into the night on my new Sans Sheriff business. I was averaging about four hours’ sleep, then Stephen got sick, and relatives arrived for a visit. We were now two families, a dog, a newly arrived au pair, an overnight start-up and a crook bloke living under one roof. You couldn’t make this stuff up. It was quickly becoming the maddest week ever. But I was exhilarated, too. Seven Network’s Sunrise rang. Could I go on their show on Sunday morning? I was exhausted and terrified but I said yes.

The plain bags I ordered on Monday arrived in Sydney and my locally based screen printer started printing them. My daughter and I went along to the screen printers in the evening to be there for the first finished bags, to print a few ourselves and to video and photograph the moment. The design printed beautifully and the bags were top quality. I was thrilled. It was great to be able to share the bags’ story online as it progressed, too. So many people were following the story via social media and the support I was getting was almost overwhelming. I felt like everyone was incredibly positive and wanted me to pull this off.

My family in the UK were spending time online searching for copycats and Stephen, who was now sick in bed, spent a lot of time emailing these and asking them to stop passing off as my brand. Most were obliging. Shutting imitators down cost time and money I hadn’t been expecting.

I realised there was no way I could pack all these bags myself when they were ready, so set about finding a fulfilment house. Cleverpak came highly recommended to me and while their quote wasn’t the cheapest I collected, I went with the company that gave me the most reassuring vibe and they were it. 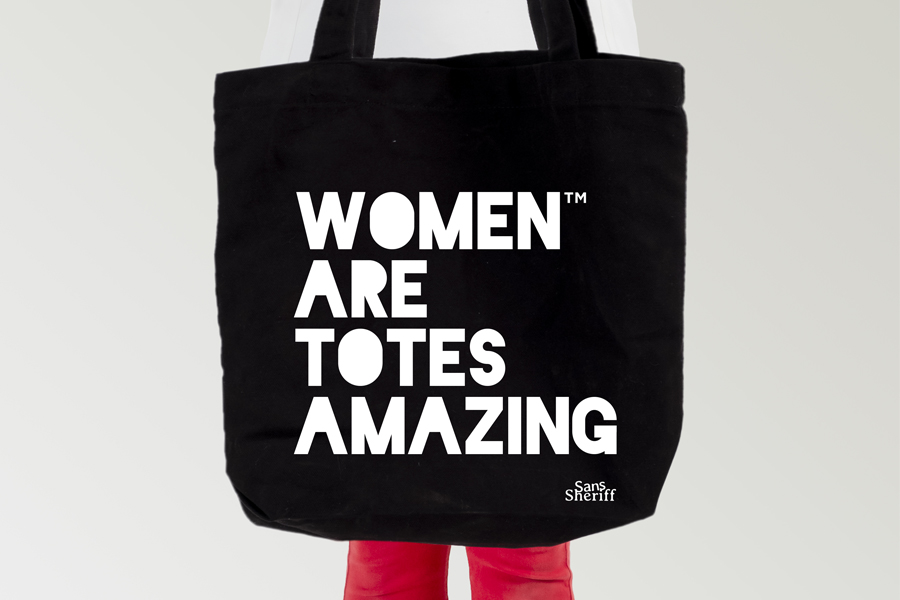 Etsy contacted me. They had seen how my bags had taken off and were concerned about my ability to fulfil the orders and whether I was feeling overwhelmed. I was pretty impressed by such a responsible approach from them. I sent them photos of the bags in production and reassured them I had it under control; they seemed satisfied.

I set up an account with Australia Post, which agreed to give me a postage discount and understood the urgency of the task. I was on the phone to them as I was picking up my kids from school. I seriously didn’t have a minute to spare the whole week, but the kids knew what was going on and were pumped about ‘Mum’s famous bag’.

My first live TV interview, on Sunrise. I’d barely slept, I was so nervous. A reassuring text from a friend said, ‘Just give it full Gwen sparkle. Everyone’s on your side. Talk to the presenters and remember to smile.’ I was actually pretty happy with my performance, which marked the end of a crazy week. As I walked off set, I could feel my Apple Watch buzzing repeatedly with another flurry of sales.

After 10 days in business, I had taken over $50,000 for my crazy bags that hatched from a meme that went viral. A few years ago that sentence wouldn’t have meant anything to me and now I was being defined by it.

I really wanted to share my whole journey, warts and all. I worked my arse off that week and everything I achieved was off the back of a 20-year marketing and design career. So, while the business was an overnight success, it was only because I had the knowledge and foundations in place to respond to demand quickly. I don’t want anyone to think it was an easy thing to do or that it’s something people should do often!

Gwen’s new WOMEN ARE TOTES AMAZING bag is available now for a limited time. A percentage of the profits will go to a specific White Ribbon Australia project. More details at sanssheriff.com.au

You can follow Gwen’s business adventures with Sans Sheriff on instagram @sans_sheriff and Faceboook @sanssheriffshop. Gwen’s packaging design agency, Boxer & Co., which she owns with creative director Mark Haygarth, specialises in branding and packaging for some of Australia’s biggest and smallest FMCG companies.