‘The biggest thing I learnt from Richard Branson’

‘The biggest thing I learnt from Richard Branson’

Premium member Lorraine Murphy spent a few days with Sir Richard on Necker Island – and he said something that has changed her thinking forever. 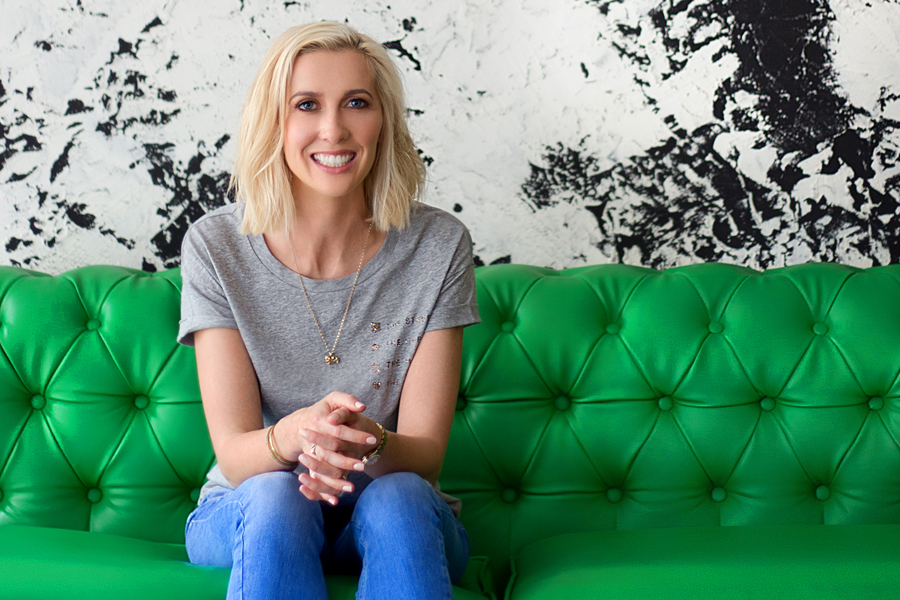 I just left Necker Island yesterday, after what are up there as five of the best days of my life. The invite came three months ago, and it was one of the (rare) instances where I said yes immediately and decided to figure out how to make it happen later. As the man himself says: “Screw it, just do it!”

I travelled there with 22 Business Chicks Premium members and I don’t quite have the words to describe the week. 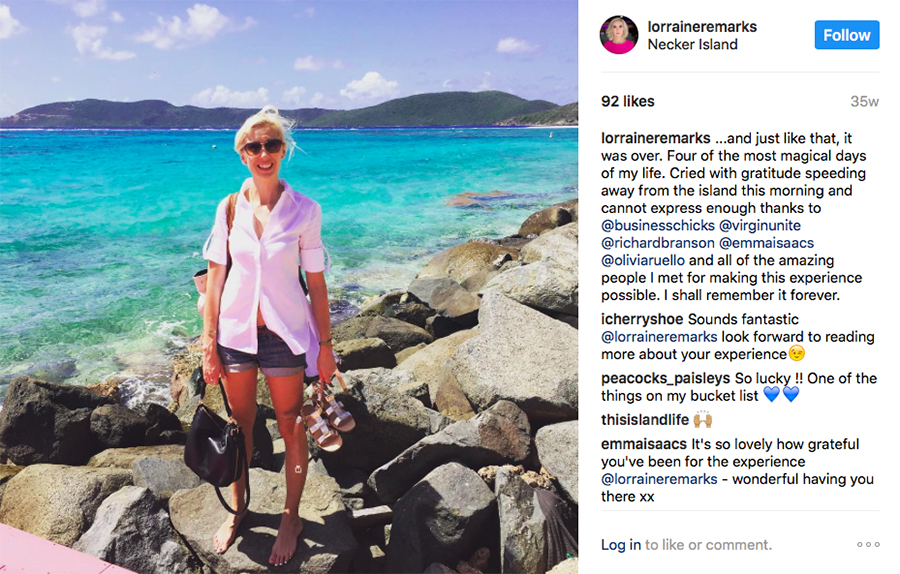 In my time on the island – and in the 24 hours since I left – my brain kinda felt like a freshly shaken snowglobe, where the sheer amount of experiences, new people and new information were all floating around furiously. It’s only today that my thoughts have started to settle and clear takeouts have materialised.

We had a lot of time with him during our time on Necker – he joined us for almost every meal – and we also had a one-hour Q&A session over cocktails one evening, in which Business Chicks Founder and Global CEO Emma Isaacs posed some thought-provoking questions to Richard. I was lucky to get to sit next to him that night for dinner, and have the opportunity to chat to him one-on-one.

Once dessert was finished on the night I sat next to him, he leaned in conspiratorially to me and said, “If I get up and dance on the table, will you join me?”

Now, hitting the table while still pretty sober in front of a group that I still didn’t know very well and while wearing a short dress is up there with things I’d perhaps rather die than do.

However, people, let’s remember that this is Richard Branson asking.

Richard beckoned to one of the Necker team and asked her to “put on the Greek music”. Once it was blaring, he leapt on the table with his napkin and did a pretty solid job on a traditional Greek dance along the length of the very long table. He spun around a couple of minutes in and gave me the nod.

I clambered up on the table and tried my best to copy his napkin-twirling, then thankfully the rest of the group got involved and what resulted was a giant Greek/Conga line around the benches of the table.

You know what? It was AWESOME! 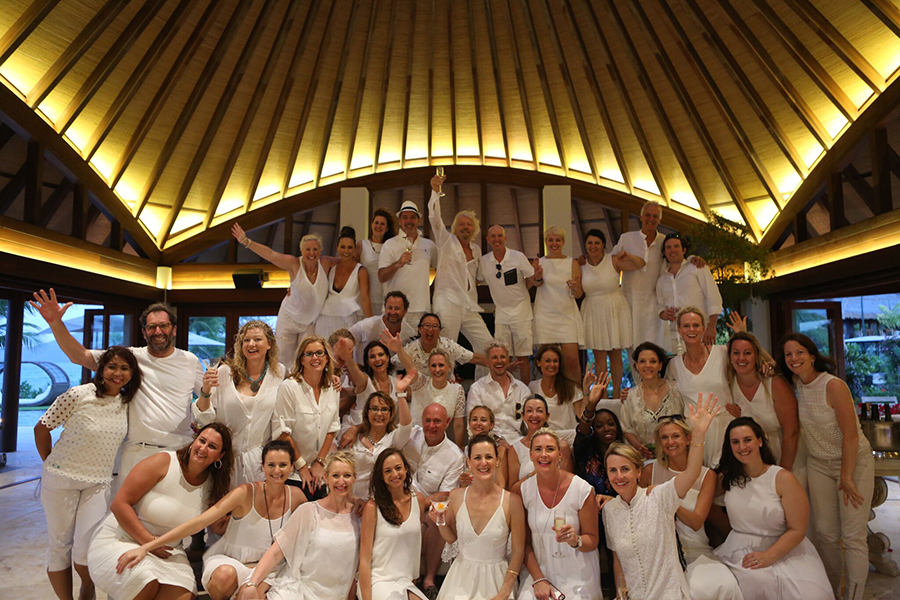 Fast forward two days later and we were wrapping up our last working session around lunchtime, and Jean Oelwang (president and trustee of Virgin Unite) tasked two of the group with getting everyone dancing for one whole song. They stepped up and got the dancing going, and another Conga line kicked off.

When about five people were in, I muttered “f*ck it” under my breath, and flung myself in – freshly washed hair and all. This is mortifying to admit, but this was the first time I’d ever jumped into a pool wearing clothes in my entire life. WTF have I been doing?

People were pushed/carried/coerced into the pool until absolutely everyone was submerged – even the bartender and video crew (minus their camera …). Then Richard somehow materialised and cannon-balled into the pool. Champagne corks were popped and we had a pool dance party.

One of the most fun moments of my life.

I had a quick chat with Richard afterwards and told him that because of him, I had danced on a table and jumped into a pool in my clothes for the first time … at the ripe old age of 33. He laughed and said words that I suspect will stick with me for a very long time. 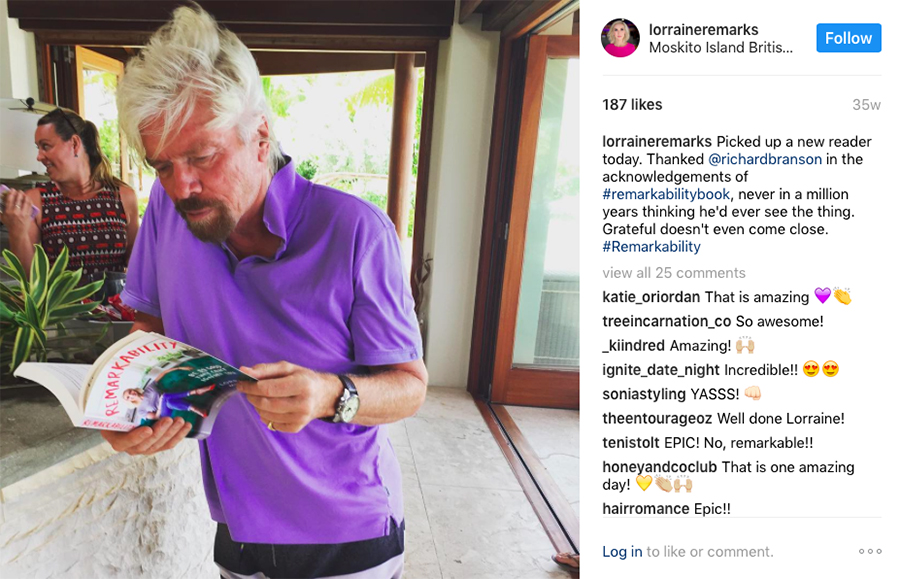 Such simple words that actually say so very much.  Words that I want to take on as a personal mantra.

Life somehow feels very serious and it can be easy to forget – it is for me anyway – to just have bloody fun.  I get so sucked in by planning, having things to do and making shit happen that fun falls by the wayside.

I realised this week how buzzy having fun is – letting that inner child peek out and express itself is somehow extraordinarily enriching.

Maybe TMI, but I put on a bra that I hadn’t worn since the start of the week yesterday and the whole day that I spent travelling was also spent yanking up its straps.  Every five minutes they dropped off my shoulders.

I couldn’t understand how the straps had somehow stretched in five days, then it hit me what was going on: my shoulders were more relaxed than they had been for years – so the straps that were normally taut were now sitting slack.

Richard Branson runs a multi-billion dollar empire, is working behind the scenes on major global issues, is on a mission to crack space travel and is a devoted husband, dad and granddad – yet he seems to have more fun than anyone I’ve ever met … and inspires other people to have fun in their businesses too.

I’m hoping I can carry this new discovery back to my life and practise a little fun and silliness every single day – while always remembering to “just say yes”.

Lorraine Murphy is the founder of The Remarkables Group, a digital influencer talent agency based in Sydney, and the author of Remarkability. This article was first published on Lorraine’s blog and has been republished with full permission.