She’s the third woman to serve on an Australian warship, is one of just 100 Muslims in the Australian Defence Force, and won the Telstra Business Woman of the Year in 2015. 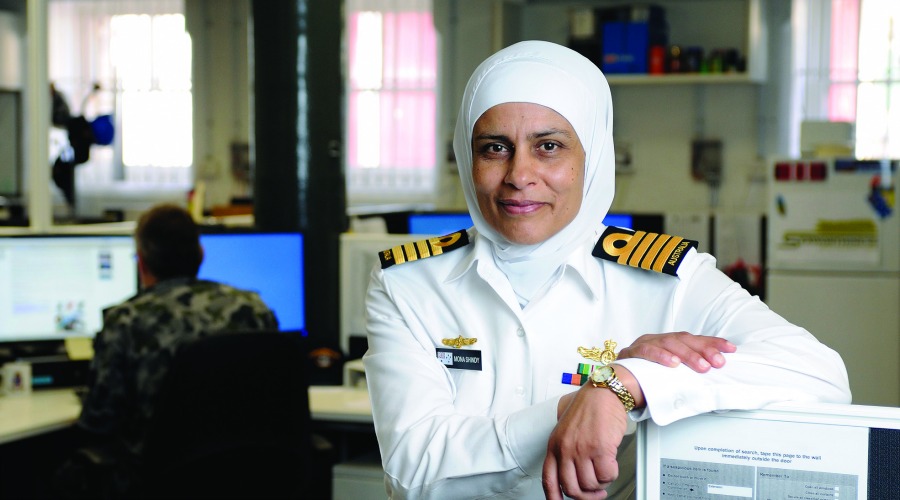 She’s the third woman to serve on an Australian warship, is one of just 100 Muslims in the Australian Defence Force, and won the Telstra Business Woman of the Year in 2015. Meet Captain Mona Shindy.

When Captain Mona Shindy first stepped foot on an Australian warship, it wasn’t just a first for her, but for Australia too. As a 23 year-old Navy recruit, she was one of the first three women to ever serve on an Australian warship – one of many firsts she’d go on to claim in a career that has traversed more than 26 years – and is far from over.

Joining the Navy at a time of great change for women in the Defence Force; a locker had to be converted into sleeping quarters for Captain Shindy and her two colleagues. “There were challenges at the time,” Captain Shindy admits. “We were a novelty and were something that people weren’t used to,” she says.

It wasn’t until 1992 that the Keating government changed the rules to allow women to serve in all Army, Navy and Air Force units, with the exception of direct combat units. And it was only in 2014 that Special Forces were opened to women currently serving with the Australian Defence Force. “When I joined it was a time of change; not only were opportunities being opened up for women, but it became a need that all participants within the Defence Force were involved in a structured career progression plan which included sea service and I just happened to be one of the first.”

Captain Shindy says that overall, her first experience at sea was positive, but there were a few hurdles. “There was some apprehension from the wives of the men on board the ship as to you know, ‘what’s this change with women now being at sea with our men?’ And also there were issues with the sailors and officers that had served in a no-female environment for so long – they suddenly had to work out how to deal with and work effectively alongside their new shipmates.” Captain Shindy also recognises that in her early career she felt she had to work harder than her male colleagues to prove her worth. “When there is difference in people or something that others are not familiar with, then normally that is just human nature to have that unfamiliarity met with some sort of uncertainty. Certainly in the initial stages in particular there was that need.”

“I certainly felt the need to work exceptionally hard to do things ten times better than a male peer; to be taken seriously and appreciated and respected for being an effective and professional team player.”

Joining the Navy was not Captain Shindy’s first time in a male dominated arena, she had completed a university degree in the blokey domain of engineering. Excelling in maths and science at school, Captain Shindy followed her elder brother into the field. “I think I just basically fell into something that played to my strengths,” she tells me.

Captain Shindy was again influenced by her brother to join the forces. He had joined the Navy as an electrical engineer after graduating, and took off travelling around the world with his new job. His stories and postcards home grabbed her sense of adventure and inspired her career choice. “Ultimately my choice came down to wanting to do something that I thought was incredibly worthwhile and important. Plus there was the opportunity for adventure and travel which probably was the swaying thing that got me into the Navy.”

It takes a village

Soon after her first tour of duty on HMAS Canberra, Captain Shindy married and had a daughter, now 20 and a son, now 18 (then almost a decade later she had another daughter, now 11). Not one to sugar coat a thing, she tells me, that looking back, having children early on in her career is the most challenging thing she’s had to navigate.

“I really struggled initially when I had the children and they were young, with the whole idea of being away for long periods of time.”

“In fact, I really did actively resist going back to sea for many years, because I was adamant and very concerned about wanting to be part of their formative years and being there to be part of that journey with them.” Her role required her to be at sea for up to six months at a time – a significant sacrifice for anyone with a young family.

“Eventually it got to a point where kids do grow and they got to an age where I felt comfortable enough with the extensive family support that I had. In particular, from a fantastic husband, who took a number of career breaks to be there fulltime for the children, which made me feel a whole lot more comfortable about going away. Also, I had my mother’s support; she helped out a lot when the kids were young. It was knowing that those children were with people that absolutely loved them as much as I did that made that whole emotional struggle bearable for me.” Captain Shindy’s struggle is something many mothers can relate to, and shows how important it is for women to have a strong support network so they can get back into the workforce after babies.

Captain Shindy believes that Australian workplaces could learn a lot from what the Defence Force are now doing to support women in navigating that time as young mothers. “Certainly in those early years we struggled as an organisation to have frank, open discussions with individuals to sort of allow them to have options for career progression. It was almost like if you didn’t fit a particular model within a particular timeframe then that really inhibited your ability for promotion and advancement. But we have learned the hard way; people talk with their feet when they aren’t able to talk and express their needs,” she says. “By clearly understanding the individual needs of people and giving some flexibility, we are more likely to retain them, more likely to get them to want to work because they feel satisfied and that produces better long term outcomes for the organisation and the individual.”

2015 was perhaps the pinnacle of Captain Shindy’s career, recognised and named the Telstra Business Woman of the Year. In her role as Director Littoral Warfare and Maritime Support, she advises the Government on where to spend billions of dollars on replacement tankers, ships and patrol boats. Her previous role saw her turn around the Fast Frigate System Program Office from an inefficient organisation to a collaborative, performance based culture, shaving 30 per cent in costs from a $130 million budget. 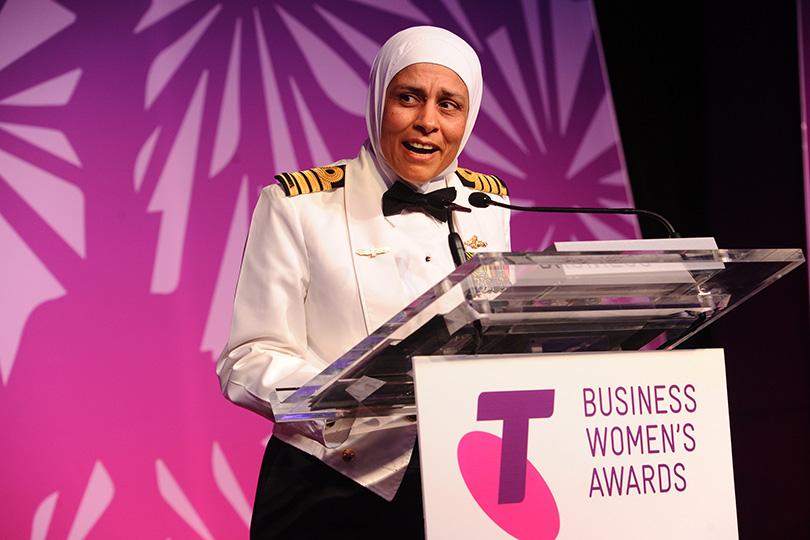 Captain Shindy is also the Chief of Navy’s Strategic Adviser on Islamic Cultural Affairs, a role she’s sat in since March 2013. As one of just 100 declared Muslims in the permanent Defence Force and one of just 27 in the Navy – only two of them women – Captain Shindy has found the role extremely rewarding. “It has allowed me to make a real difference to Navy capability and it has given me an opportunity to give back to the communities that raised me and gave me the kind of values that I have.”

“It has kind of made me a bit of a role model for the Australian Islamic community, which I am really happy for too.”

Emigrating from Egypt when she was just three years old, Captain Shindy’s family settled in the Sydney suburb of Maroubra. At 14, her father passed away, leaving her mother to raise four children. “It wasn’t easy because we had no other family in Australia, but my mother was a strong lady.”

In the 2015 Australia Day Honours, Captain Shindy was awarded the Conspicuous Service Cross for her work bridging cultural divides. “Part of my role is to educate serving colleagues about Islam. Better understanding in itself improves our compatibility when we work with allied forces and it also allows people to understand what are these fellow serving Muslim colleagues all about? And what drives them? And that makes for a better and more cohesive work environment.”

“At the same time I go out into communities and talk about what defence actually does. I guess some of the Islamic communities have some apprehension about firstly, how they will we be accepted if they approach the Defence Force and consider it as a career. And secondly, there is a bit of I suppose, hurt, still in some of the Islamic communities about a lack of understanding of our involvement in some military campaigns abroad. People in their extended family, innocent people, may have had some suffering in their lives as a result of some of these campaigns. That is also something that I work on to increase understanding of the roles and functions and purpose of some of our operations. And that goes a long way to breaking down barriers and misconceptions and builds trust and understanding and respect between people.”

In a visible role and often in the media, Captain Shindy has had to learn to cope with varying degrees of abuse. In an online article about her Telstra win, a commenter wrote, “My father was in the navy for nearly 50 years and he served it with pride. He would turn over in his grave [if] he saw this piece of filth”. Captain Shindy told The Canberra Times, “That’s reality, that’s what’s out there. You’ve got to live with it in the perspective that Muslim people in Australia have lived with varying degrees of comments over the years. Maybe when I was younger those things might bite a little bit and hurt. As I’ve become more philosophical about the issues in the world today I find myself reflecting on why it is people are making those comments.”

Captain Shindy made a very personal decision to start wearing the hijab in 2014 after she took part in the pilgrimage to Mecca. “It’s a once in a lifetime thing that Muslims do,” she said. “The first time I put on the hijab was when I left Sydney airport and got stopped by Customs and asked `where is the money?’ and `what are you doing?’. The pilgrimage is a time of renewal, it is where Muslims ask for forgiveness for all previous life events and how they’ve lived and they start afresh. When I came back I wanted to practice my religion fully and fully meant doing that last obligatory bit and wearing the hijab. I haven’t taken off the hijab in public since.”

As I sat in the audience at the Telstra Awards and listened to all the finalists’ speeches, I turned to my colleague and whispered, “I hope Captain Shindy wins.” And it was a sentiment that crept around the room, because when she was named the Telstra Business Woman of the Year, everyone got to their feet. She is a breath of fresh air in a world that can often be stale. She’s frank, opinionated and fiercely passionate. For all those social commentators calling for strong, smart Australian Muslims to step up and work for a better tomorrow, Captain Shindy’s already there, more people just need to listen to her.