How Bond University is working to ‘close the gap’

How Bond University is working to ‘close the gap’

Indigenous Australians continue to be one of the most disadvantaged in education and employment in the country. 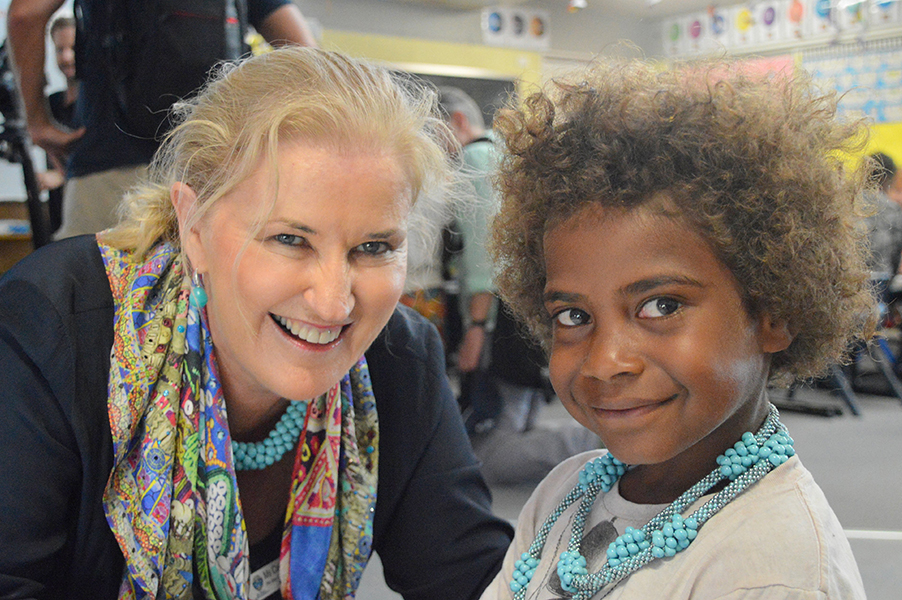 The remote Cape York community of Lockhart River had never seen anything quite like it.

Over the following four days, this inaugural Yarning Up delegation met with the Councillors, Elders and Traditional Owners living in one of Australia’s most isolated Indigenous communities.

They perched on tiny chairs, reading with Primary school children in their classrooms. They toured the town police station, medical clinic and childcare centre, but most of all, they spoke to the women.

“The original concept of Yarning Up was about women connecting with women; getting to the heart of the issues that affect us as mothers, grandmothers, aunties, sisters – regardless of where or how we live,” said Catherine.

“The conversations ranged over every topic imaginable, but the underlying theme was the shared understanding that education is the key to unlocking the future for Indigenous children in remote Australia.

“Inviting these educators to see first-hand the unique challenges confronting the Lockhart River children and their families resulted in a wealth of practical ideas that could ease their transition from the community primary school to the larger regional and city-based high schools, and established school-community-family partnerships to support their progression all the way through to Year 12.”

Yarning Up has since become an annual Bond University event, alternating between Lockhart River and the Torres Strait Islands, expanding to include male delegates and increased corporate involvement.

In 2016, it saw the University honoured with the Queensland Premier’s Reconciliation Award and the ATEM/Campus Review Award for Excellence in Community Engagement. But Yarning Up is just one of the programs spear-headed by Bond University’s Pathways and Partnerships team aimed at closing the gap between education outcomes for Indigenous and non-Indigenous Australians.

“When the Pathways and Partnerships portfolio was established in 2012, one of its key goals was the development of Indigenous pathways from school to tertiary education to long-term career opportunities,” said Catherine.

“From the outset, we recognised that to achieve this; we would need to move beyond the University’s core business of delivering degree programs and embrace a whole-of-community approach.”

The resultant strategy incorporates a number of outreach programs like Yarning Up. Every year, groups of Bond students travel to Indigenous communities in Kununurra and Abergowrie, as well as connecting with local high schoolers as volunteers for the Australian Indigenous Mentoring Experience (AIME).

“The key aim of these outreach programs is for our students to share their experience of university and hopefully encourage these children to follow in their footsteps,” said Catherine.

“It is also a rare opportunity for our Bond students to learn more about Australia’s Indigenous culture and we get students from all over the world applying to take part in these programs.”

Since 2012, the University has awarded 67 Indigenous scholarships and distributed more than $40,000 in bursaries to help with textbook and living costs.

“Nyombil has become a real hub at Bond; not just as a social and cultural connection point for Indigenous students but also for non-Indigenous Australian and international students who are keen to learn more about the traditions and heritage of our First Nations people,” said Catherine.

“It is also the meeting place for the Student Society for Indigenous Awareness which hosts a Jingerri (‘welcome’) barbecue each semester, a full program of NAIDOC Week events, film nights, guest speakers and other activities.”

A key element of Bond’s commitment to Indigenous education is the concept of making Aboriginal and Torres Strait Islander culture part of everyday campus life for all students.

In almost every Faculty, meeting room and hallway, the walls are adorned with the colourful, oversized artworks that make up Australia’s largest private collection of Indigenous art on public display – most of which has been donated or loaned to the University by art patron, Dr. Patrick Corrigan AM.

In addition to integrating Indigenous culture throughout the campus, the collection is regularly showcased to visiting VIPs, guests and the general public via the Corrigan Walk Art Tour which traces the evolution of Indigenous art from the traditional Western Desert Movement to the more contemporary styles of artists like Sally Gabori and Tommy Watson.

Of course, all of these initiatives represent a considerable financial investment for Bond University – at last count, more than $4.6 million over the past five years.

As a private university, Bond receives no government funding for these programs; all of it has been raised through corporate sponsorships, individual philanthropy and fundraising events such as the Bond Indigenous Gala which attracts more than 550 attendees and is a now a major fixture on the University’s annual calendar.

“What inspires our supporters – and what inspires us – is that our Indigenous education initiatives are working,” said Catherine.

“Every year, we have seen enrolments of Aboriginal and Torres Strait Islander students increase – up by 112% since 2012.

“Most importantly, the retention rate for our Indigenous students is 95% – far outstripping the national average of 71%.

“We’ve celebrated the graduation of 64 Indigenous students to date, and we have watched with pride as they have established their careers in areas as diverse as tourism, law, media and international relations.”

So often we hear that the issues facing Australia’s Indigenous communities are ‘too complicated’ or ‘too difficult’ to solve. But Catherine firmly believes that it’s not as hard as we think.

“Throughout my career, I’ve spent considerable amounts of time in both urban and remote Indigenous communities,” she said.

“I’ve learned that we need to listen to what they want rather than telling them what they should do.

“I’ve learned that Indigenous parents want the same things for their children as we all want for ours.

“I’ve learned that understanding traditions and honouring culture enriches all of us as Australians.

“And, as evidenced by our experience at Bond, I’ve learned that we can close the gap through the gift of education.”

This interview is in association with our partnership with Bond University. Find out more about Bond Uni, corporate sponsorships and their Indigenous initiatives here.