How I got the job: Dermalogica Australia’s Suzette Cassie

How I got the job: Dermalogica Australia’s Suzette Cassie

Suzette Cassie runs the Australian arm of one of the world’s most iconic skincare brands, but the 45-year-old never expected she’d end up where she has today. 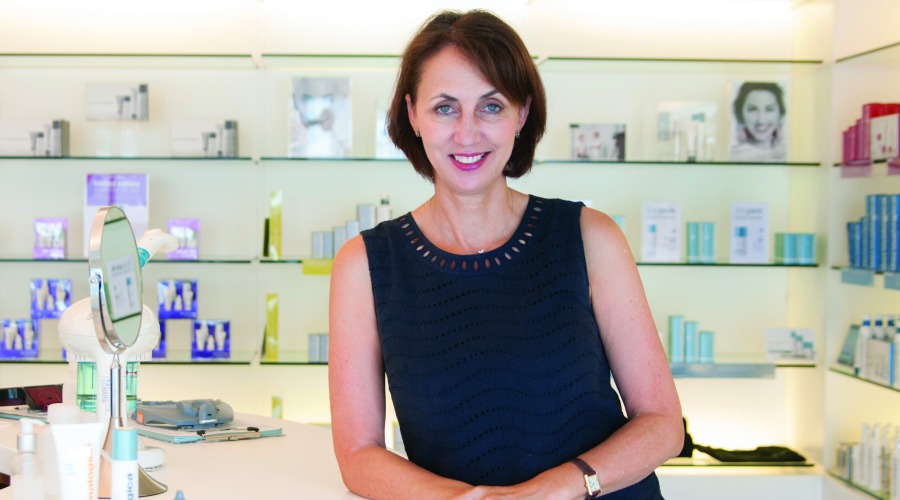 Born in England, Suzette moved to South Africa when she was 12, after her engineering father was was relocated there for work.  “It was 1972, and I had no idea you couldn’t actually walk down the same street as a black person and that there would be lions roaming the streets. But I had a fabulous upbringing there,” she says. After jobs in marketing and PR, she moved to Hong Kong aged 27 for a couple of years with her then-boyfriend (now husband), before a stint in the UK working in sports marketing for Kraft Foods, a sponsor of the Women’s Tennis Association.

“For four years I travelled the world, having a wonderful time. They sent me to the Australian Open, and I remember thinking, ‘Oh, my gosh, I just love this place!’” When she visited Sydney, it instantly felt like home. “I just knew I wanted to live here one day.” At the end of the sponsorship tour, her colleagues all went back to the UK, but Suzette was determined to stay, so she did, all on her own (she’d split up with her boyfriend) – and without a job.

A touch of fate

There was only one small problem: she couldn’t find one. For six months, she knocked on doors without any luck. She was about to pack her suitcase and go back to South Africa, as she had no visa – but then fate stepped in. Ray Wurwand (who founded Dermalogica with wife Jane) and Dermalogica CEO Stephen Kurland were coming to Australia to see if they wanted to set up the business there. Suzette’s mother happened to be friends with Stephen’s wife, and put them in touch. “They wanted me to set up a few meetings and introduce them to people here, which I did. But then they asked me if I’d be interested in running Dermalogica for them here. I knew nothing about skincare; I knew nothing about running a business. But I was so desperate for a job I said yes!” They sent her a box of products. Her first obstacle: trying to find a therapist to stock the stuff, when no one had ever heard of Dermalogica. “I’d been seeing a beauty therapist in Double Bay, Sydney, and I begged her to take the products – I said I’d give them to her for free! And she did, which meant we could finally say we had a stockist in Australia.

“I carried around a brick-like phone; back in 1995 there was no internet or email, so I was constantly faxing Stephen in the US with questions – I had no real idea what I was doing!” But Suzette was young, fearless and determined.

“My small team had an office in Paddington, which was absolutely tiny. We would just sit there waiting for the phone to ring.”

“Once a month a delivery would arrive from America, and we would all offload the truck out the back of the office and fulfil the orders. And that’s how it started.”

Dermalogica Australia celebrated its 20th anniversary last year – Suzette now manages 120 staff in Australia. Never in a million years did she imagine the company would be where it is today. “When we did our first million in sales turnover, Stephen said to me, ‘Well, by 2006 you’re going to be doing 15-16 million,’ and I replied. ‘You are dreaming – there’s no way in a million years that will happen! And now we’re well past that – it’s pretty incredible, really.”

There have been a few reasons for success, she says, including timing. “At the time there were a lot of traditional European brands around, and Dermalogica was the first more contemporary American brand.” Remarkably, they’ve spent very little on advertising over the years, relying on word of mouth and clever PR. “Back when we started, there was no such thing as social media or digital marketing, it was really just magazines. Three or so years ago we started experimenting with small campaigns – but we haven’t really invested much into advertising. Our products speak for themselves – they’re credible, authentic and simple in their effectiveness.” Suzette also admits that she would have struggled big time in the beginning had it not been for funding by the Dermalogica head office.  Another secret to the business’s success? Having the right people on board and a killer work culture. “We’re like family,” Suzette says. “We’re 85 per cent women, and some of the staff have been with us for 20 years! If we have any issues, we talk them through.”

“It’s simplistic, but the key to staff retention is to ensure everyone believes in the brand as much as you do.”

“Keeping that culture is absolutely paramount – from the language we use to the relationships we build with our stockists and customers. They have to buy into what we are, our philosophy; we want them to feel a part of that extended family too.”

As for what qualities make a great leader, Suzette says that being a good listener is crucial.  “I’m quite an empathetic person. I hope I come across as a good boss – I always maintain an open door, anyone can chat or ask anything and are very calm, nothing seems to ruffle my feathers too much. I look at things quite logically and rationally, and question things: why are we doing this, who are we doing it for.

Suzette says Dermalogica Australia’s run hasn’t always been smooth sailing – back in 2003, the brand had a run-in with the ACCC.  “It was when the internet was starting to take off – some of our stockists had started discounting the products quite clearly, after I’d told them not to, and at that point I wasn’t aware that I wasn’t in a position to dictate the price of items to be sold at. It was then brought to the attention of the ACCC, leaving us with a horrendous six months with court cases, and me on the witness stand. It was such a simple mistake yet it felt like a personal attack. We were fined $250,000. So it was a very expensive lesson.”

Suzette says at this point she grappled with a lot of self-doubt. “I thought, ‘Maybe I’m not cut out to do this. Maybe I don’t have the qualifications to take this company to the next level.’ But everyone around me was so supportive and felt bad for me. If it weren’t for the people around me, I would have really struggled.” Suzette says the past few years have seen Dermalogica go through some tough times, too. “It’s a trickier market these days; the whole industry has changed enormously with so many new brands and so much new technology. The business is still very profitable, but it’s been harder.

Recently, we’ve tried to reframe the way we look at things: instead of challenges, we see opportunities.” One of the opportunities has been to move into David Jones. “We wanted to stay true to the brand when we did it, so we have professional skincare specialists behind the counter selling the products. It’s made our brand more visible, but we also haven’t strayed away from what Dermalogica stands for.” In July last year, Dermalogica became partners with multinational consumer goods powerhouse Unilever. “It’s exciting times for us,” Suzette says. “Unilever love our brand and market they are in. It’s a fresh opportunity for us.”

Moving forward – and looking back

Suzette says she can’t imagine doing any other job. “Our 20-year anniversary was the opportunity for me to reflect and think about the future – but I just can’t imagine any other workplace. I feel like there are some great things in the pipeline for Dermalogica.”

Suzette is still very much hands-on in the office. “I have six departments here at our office in Sydney. I rely heavily on them to do what they do and I speak to all of them everyday, about the little day-to-day things or the bigger picture things – the business is small enough that I still get to be across most things.” Work/life balance is very important to her; she doesn’t believe in working long hours – that goes for her team, too. “Mostly, my hours are nine-to-five, but occasionally I’ll take home work. I think that is a good thing.”

“No one in the office does long hours thankfully. I always encourage people to leave on time – it’s an exodus at 5pm!

“I have two teenage boys, so I enjoy spending time at home with them, and I always make time for yoga and travel.”

Over the years, Suzette says she’s had many pinch-me moments. Dermalogica is now in 90 countries worldwide, and she gets to travel often. “We have regular congresses in beautiful destinations. On our recent 20th year anniversary, the girls had organised a lovely little slideshow for after dinner, which had photos from right through the whole journey. I’d kept all our old marketing leaflets, and there were photos of all the people we’ve met along the way. As I was sitting there, surrounded by my wonderful team, looking at them, it just hit me: for a girl who was ready to pack her bags and move to South Africa, it’s been one hell of a ride.”