Why Donna Hay told the crowd, ‘I don’t need to see Girl Power in a hashtag.’

Why Donna Hay told the crowd, ‘I don’t need to see Girl Power in a hashtag.’ 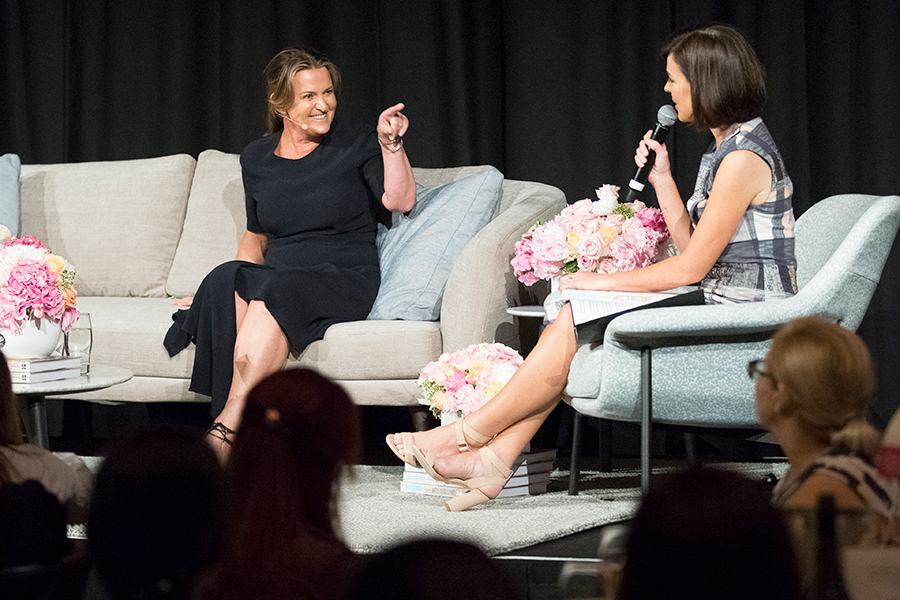 If you couldn’t make it to one of our events with Donna Hay around the country, make do with this recap, which brings together some of our favourite takeaways from our lunches with Australia’s bestselling cookbook author.

It was her mother who (inadvertently) got her into cooking.

Donna describes herself as “a nerdy little girl who loved to cook.” One of the reasons she started experimenting in the kitchen was because her mother didn’t enjoy cooking.

“I think you get to the point where feeding your family just becomes a bit of a chore,” says Donna. “I’m the youngest of three girls, so when I showed an interest, not only did my mother get excited, but so did the rest of the family.”

“My mother does credit herself with building my career, because she thinks she created that opportunity for me!”

On turning cooking into a career.

Donna never considered being able to turn her passion into a career. When she graduated high school, she thought cooking would always be a hobby.

“I was really shy, and I just didn’t think I’d be able to become a chef in that high-pressure situation,” says Donna. “I didn’t want to be a Home Economics teacher and after I finished the HSC, I stumbled across a course that was basic cooking and food science, and I just loved all the science.”

“There weren’t really many jobs that I thought could do, but what I loved was the food magazines.”

“I thought I’d never be able to get into magazines, but I also thought, ‘well, there has to be a couple of jobs. So if I just become the food stylist assistant that everyone has to have, I might get somewhere.’ That and I worked my butt off.”

Women over a certain age will remember the Tom Cruise roast lamb ad with Naomi Watts that aired on our television screens in the late 80s. Well, one thing we learned was that Donna was behind the food styling of that now famous leg of lamb.

“The embarrassing thing was that I had to go to the butchers and ask for 36 right legs of lamb – and that’s not a joke – because they poke fun at you for years to come!”

On having the ‘better better’ gene.

Donna joked about her food director being afflicted with the same ‘better better gene’ she also possesses. Tarsh asked Donna if her perfectionism is part of her personality or just how she goes about achieving great results.

“No, I get to the point where I think ‘this is good,’ – and that’s why you love me to be a perfectionist, because on Tuesday night when you’re cooking a recipe it needs to work,” Donna says. “So the perfectionism side to me is really just about that detail more than anything. And the ‘better better gene’ in me is always looking for the next big thing or project or adventure.” 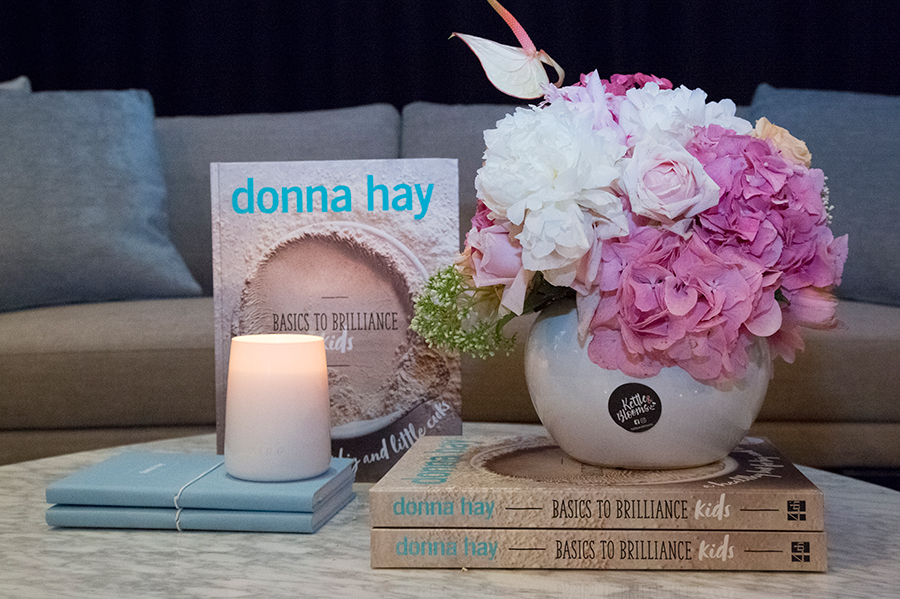 On working with kids.

When Donna Hay’s latest cookbook, Basics to Brillance Kids was coming together, she dialled one of her fellow foodies to ask how she should go about it. That friend? Oh just Jamie Oliver.

“In Australia, with the Masterchef and My Kitchen Rules tv shows, kids are really responsive to cooking and eating healthily, but when I looked in the market, there wasn’t anything for novice little cooks to get their hands on.”

“I was chatting with a fellow foodie; you probably don’t know who he is … he keeps a low profile … Jamie Oliver,” joked Donna.

“And I said to him that I’d been wanting to do a kids project for awhile, but where I believe I can affect change – isn’t with the sugar tax – but teaching them how to cook.”

“We had a long chat about how to engage kids in cooking and even working with them on set.”

“There’s really nothing more humbling than working with kids; they really tell it like it is,” laughs Donna. “By day three of filming, they’re directing the episode.”

Donna is no Prada-wearing devil in disguise. She encourages her staff to leave by 5:30 pm every day, and she’s turned the traditional magazine model of intense deadlines on its head.

“If you’re running a creative team, they bring back the most creativity when they’ve been outside and not in the office,” says Donna. “And if I’m going to talk about this work-life balance, then let’s maybe cut your Facebook time in half kids, and get out by five-thirty.”

“You can create that culture of the more hours you put in, the better employee you must be, or you can actually reward people for the better work.”

“Last night I was swimming with my boys at 6 pm, and that’s what makes me really happy, and when I’m happy I’m a better boss, and the same goes for my staff too.”

“You can create that culture of the more hours you put in, the better employee you must be, or you can actually reward people for the better work.”

“You have to lead by example too. It’s a tough one, and it hasn’t happened overnight, but [the changes we’ve made has] also stamped out that horrible curve in magazines with the rush right up to the deadline.”

“What that creates is for a week afterward you have people who are so tired and fatigued that you don’t really get much out of them. So taking that curve out of the business was great [for balance] as well.”

On what’s changed since she became a mum.

Donna revealed that one of the main things that has changed since her boys were little is that asking for help doesn’t have the same stigma anymore.

“Now I have a great group of friends and local mums who will catch me, and I absolutely adore them for it.”

“What I say to all my young girls going on maternity leave is ask for as much help as you can. And if someone asks to come over and see the baby say yes, but also ask, ‘can you bring me something to eat? And while you’re here can you fold some of my washing?’”

“For me what changed was when I found my tribe. And for a working mum it can be quite hard to find your tribe. But now I have a great group of friends and local mums who will catch me, and I absolutely adore them for it.” 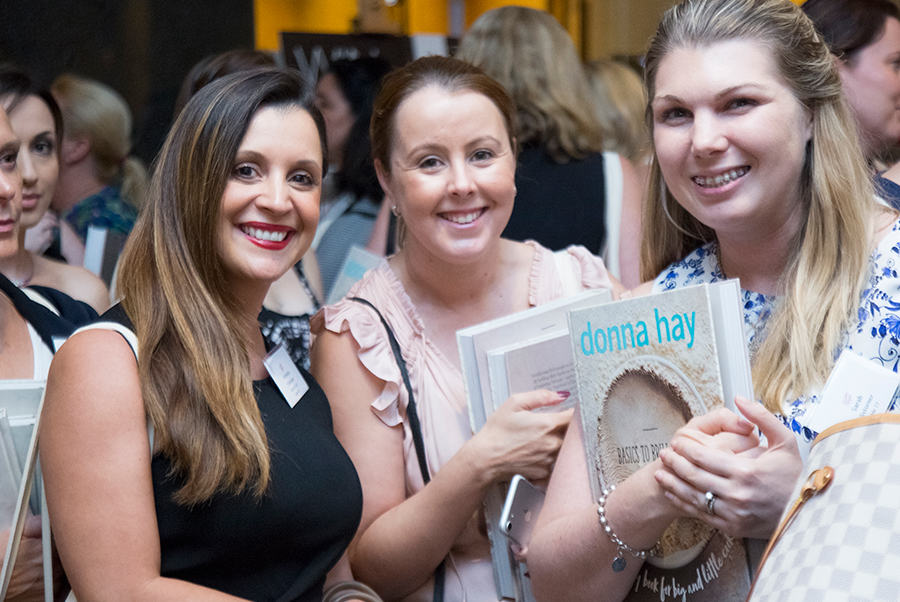 On hiding swimming carnival appointments in her work diary.

Previously if Donna had to duck out of the office to see her boys collect an award or for a sporting event, she never revealed to her staff where she was going – a practice she’s changed now to be a better role model for her mostly female employees.

“I’ve changed a lot of things [about the way I work], and if I need to go somewhere for the boys for school, I don’t hide it anymore.”

“I just thought that I would be seen as skiving off and that I wouldn’t be on the same playing field if I had to go off to a lot of school things, and I didn’t want to miss out.”

“Then I realised I was creating a bad role model for the women in my office,” says Donna. “I listened to all this mentoring and girl gang stuff, and I thought this isn’t on – and it’s a big responsibility, especially in publishing when most of my employees are females. I had a ‘check yourself’ moment, where I thought to myself you have to tell them where you are going and why.”

“I’ve been doing a particular breakfast show for a number of years, and you turn up and the floor manager is a man, the camera operator is a man, and for the first time the other day there was a woman on the camera.”

“I got so excited like, beyond excited. I kept saying, ‘there’s a girl, there’s a girl on the camera!’ And then I realised how ridiculous that was, but I’ve probably been doing that show for over ten years.”

Her parting advice to women everywhere. 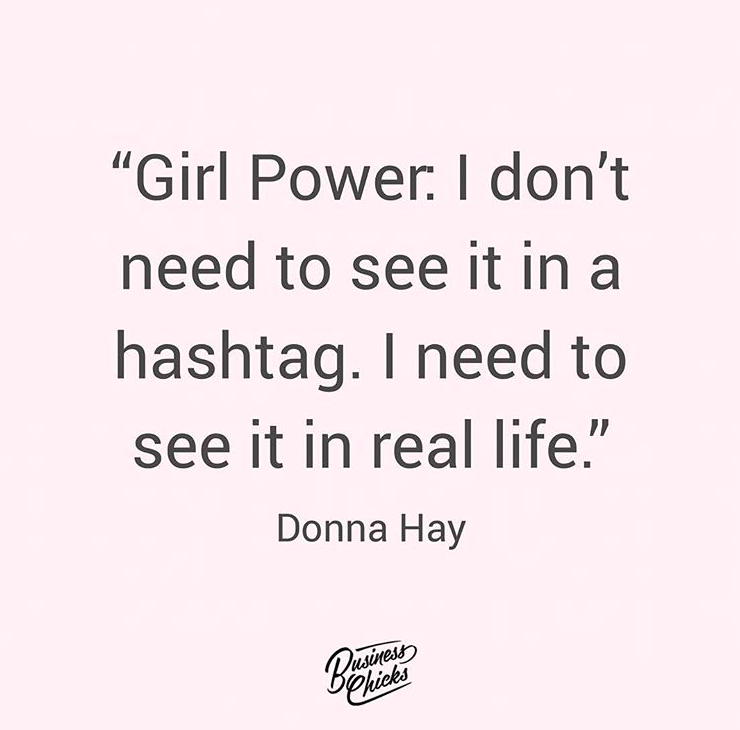 A special thanks to our annual AV partner Staging Connections. We love you guys!