“I believe in trusting your gut, starting things before you’re ready and just having a go.” 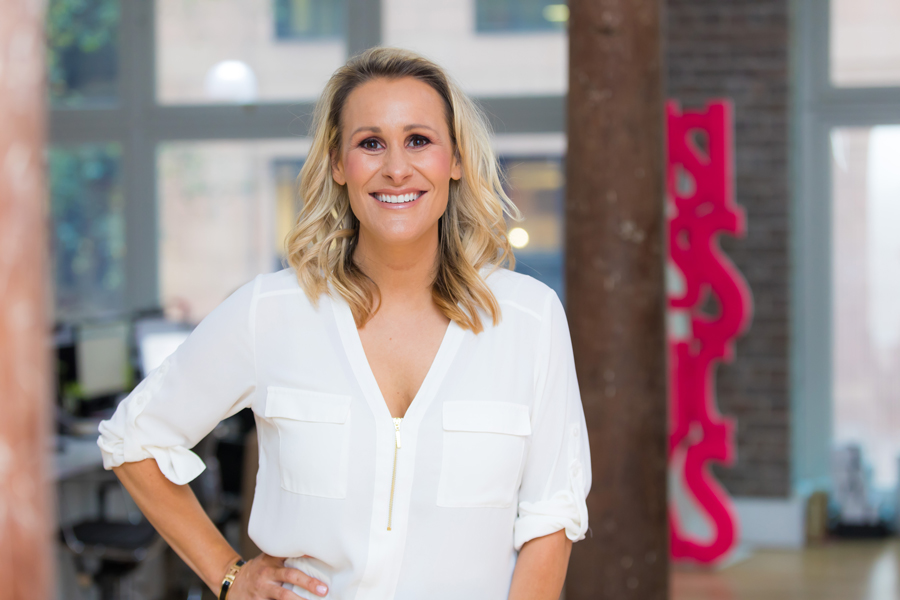 Anyone who knows our Global CEO and founder Emma Isaacs knows the only level she operates on is BIG. When she was just 18, she became the co-owner of a small recruitment company where she had just started working. When she sold the business eight years later, it had grown exponentially and been named as Australia’s Favourite Recruiter in the SEEK Awards for three consecutive years. At 26, while still running the recruitment company, she wanted to start something new. She was invited to a small event by a group called Business Chicks and learned the business was for sale. She took a leap of faith and bought it.

Fast forward 13 years, Emma has transformed Business Chicks from the ground up, growing it into what it is today – a global enterprise that operates in two continents, 11 cities and produces more than 100 events annually. We sat down with her to talk about the big moves she’s made in life and try to gain some of that brilliance for ourselves.

You dropped out of uni at 18 and started your first business soon after; you bought Business Chicks when you were 24. You met and married your husband within a year and had a baby a few months later. Your life has been a series of moves you weren’t ready to make, but what’s given you the confidence to just go for it?

Haha! I guess my life has consisted of a series of experiences where I’ve never been fully prepared but have just jumped in all the same. I’ve always been someone who tries new things without knowing how they’re going to turn out. I birthed my five babies at home, moved countries to start a new business with my family in tow, and have started my companies with no formal education or know-how – I believe in trusting your gut, starting things before you’re ready and just having a go. Life’s too short!

Tell us about how you reacted when a friend first asked you to come along to a Business Chicks event?

While I was running my recruitment business, a friend invited me to a Business Chicks event. I was 24 at the time and told her there was no way I’d ever go to an event by a company that calls themselves ‘chicks’. Luckily she told me to get over myself because going to that event was possibly the best thing I’ve ever done! I had been to so many corporate functions and networking events, but the Business Chicks event was like nothing else I’d ever seen. Everyone was happy to be there. There was music playing, everyone was smiling and happy – there was just an energy about the event, and you could sense something special was going on. I loved it so much that I immediately signed up to be a member and started buying tables for every event on the calendar and a few months later I learned the business was for sale. At the time, there were probably a million reasons why I shouldn’t buy the business – I had a successful business already and had never even run an event before – but I just knew that I could take this little organisation and turn it into something extraordinary. So I jumped in, bought it six months later and incorporated it as a company in 2006!

Since then, we’ve grown the business from a small charity side project with 250 members into what it is today – a global company that operates in two continents, 11 cities and speaks to more than 450,000 women. I’m really lucky that the things that attracted me to Business Chicks all those years ago still fuel me every day.

The title of your book seems to fly in the face of everything about traditional business planning. Why did you call the book Winging It?

I believe we learn a lot when we attempt something we don’t yet have the skills for. When I first sat down to write this book, the very first thought I had was ‘I have no idea how to write a book. I’m just going to wing it.’ So I typed Winging It at the top and then started writing. When it came time to pitch the book to publishers, I took the title off the manuscript and told them I hadn’t yet decided on a name.

“We drafted an email to the publisher with the title, and they came back within minutes saying, ‘We love it, let’s do it.’ It was a reminder to always go with your gut, and that your intuition rarely fails.”

My colleague Lucy and I spent ages going back and forth on titles for the book, and we ended up consulting our CEO, Olivia, and asking her what she thought. She said, ‘Whatever happened to ‘Winging It’? That’s so you Em.’ Lucy and I felt a little silly as we had the name under our noses the whole time. We drafted an email to the publisher with the title, and they came back within minutes saying, ‘We love it, let’s do it.’ It was a reminder to always go with your gut, and that your intuition rarely fails.

You have five children, which is an amazing achievement in itself. Does it get easier each time or is it just constant chaos?

It’s as you’d expect. It’s often loud and always busy but a friend who was over the other day said to me, ‘This place is calmer than a lot of my friends’ homes and they only have two kids’. So that made me feel good for a minute before the kids starting hitting one another again! Life with five children is very hectic but the good moments definitely outweigh the bad. 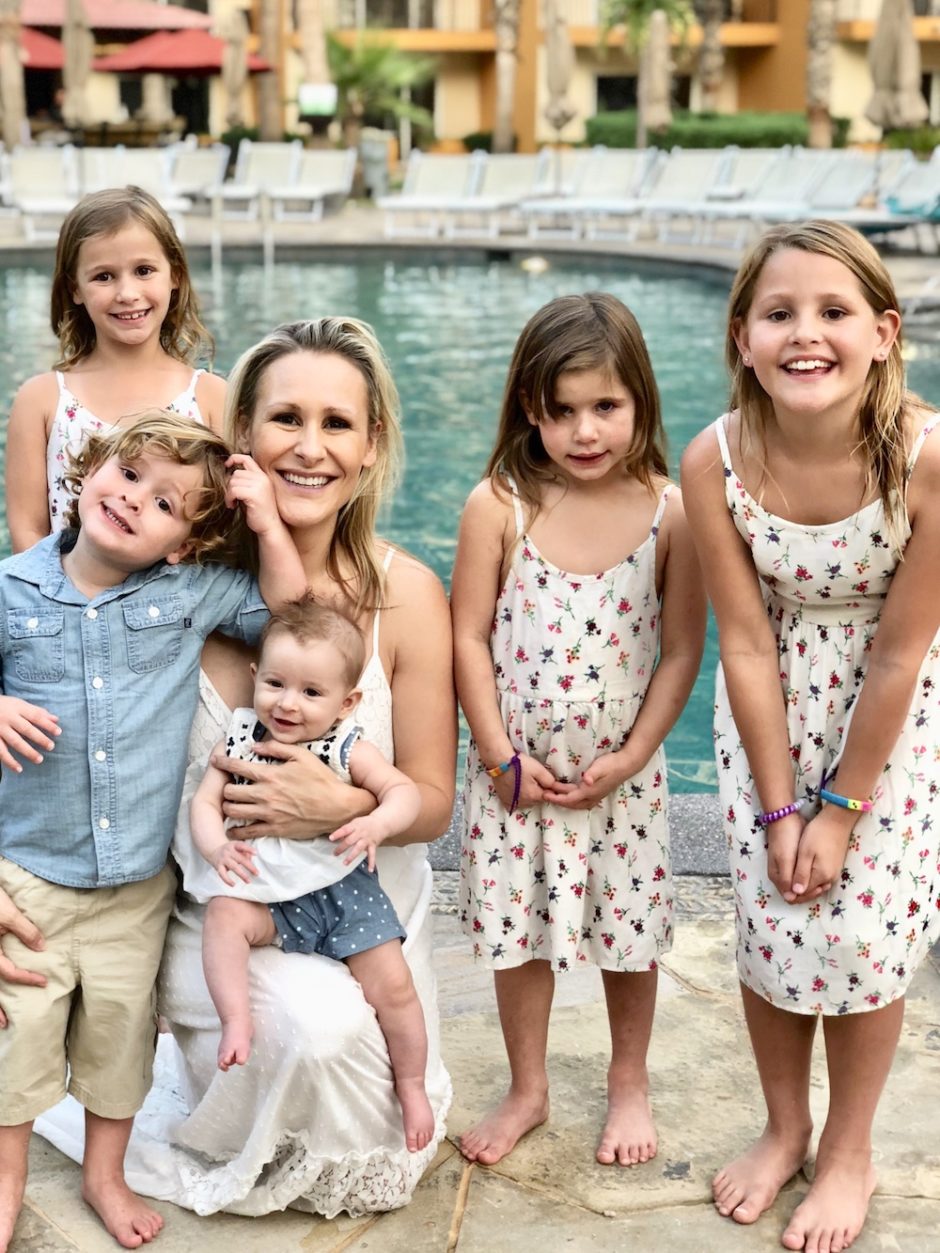 What was it that prompted the move to LA for you?

From the time I bought Business Chicks, I’d always wanted to take our brand global, and by early 2015 I knew the time had come to shake things up. We’d become such a trusted and established brand here in Australia, and being a typical entrepreneur I’m never truly happy unless I’m experiencing some sort of discomfort or fear. We always knew our growth was going to come from new territories, so the US felt like a good first step. I looked at where my largest networks were outside of Australia, and that happens to be the US. I have close friends and family in the States and a great relationship with our past speakers from the US (people like Arianna Huffington and Rachel Zoe who went on to speak at our LA and NY launch events). I’ve lived in Los Angeles for more than three years now and while the business journey has been exceptionally challenging, being in the US has taught me so much, and I’ve been exposed to so many new experiences.

What do you think is stopping women from saying yes to new opportunities?

I think overthinking is where a lot of people go wrong – getting stuck in analysis and not taking action. I see a lot of women drown in self-doubt and a lack of self-confidence. This saying is also true: “If you believe you can, or can’t, you’re right.” I believe in faking it ’til you make it and just having a go. Being successful is just as much about mindset as it is about skills and the quicker we can understand that, and work on improving our mindset and changing the negative self-talk that grips so many of us, the more fulfilled life becomes.

If you could put your success down to one or two things, what would they be?

Hard work and my investment in people. Neither are easy, but they matter.

While we’re on the topic of confidence, you’ve recently started Invisalign treatment. Tell us what made you want to start and what impact it’s made to your life and confidence since starting?

I have two crooked teeth on my lower jaw and I’d always been a little self-conscious of them, but I guess I always thought there were more important things to focus on than my appearance, so I made a lot of excuses about why I couldn’t do anything about the problem. This year, in the spirit of winging it and taking action, I decided it was time to start!  I had the treatment the day before Winging It was released, and as it is almost invisible, I’ve still felt the confidence to go out in the weeks and months after with the countless media interviews and event appearances that come with launching a book!

This one’s a bit of a cliché but what is your number one piece of advice to those who want to make a big move, but are afraid to take the leap or don’t know what to do?

If you’ve got a dream or a goal, just take one small step at a time. Don’t overthink it. It’s all about perpetual motion. Try and do one thing every day – whether it’s making a phone call or sending an email – that moves you forward. Before you know it, you’ll be on your way!

This article is proudly sponsored by Invisalign® Australia.