In Australia, each year, endometriosis is estimated to cost $4.9 billion in lost productivity. 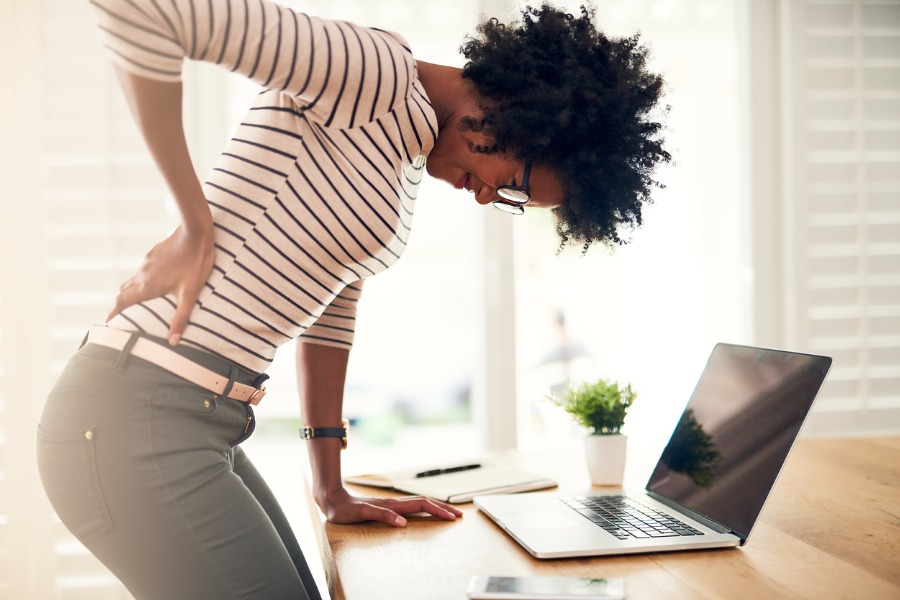 Talking about menstruation in the workplace can be especially uncomfortable – but is it time to start being frank about conditions like endometriosis, for the benefit of women, employers and the economy?

Many women find themselves reaching for a hot water bottle or pain and anti-inflammatory medication when they experience mild discomfort or cramps around the time of their monthly period.

Yet, for the estimated 1 in 10 women with menstrual conditions such as endometriosis or adenomyosis, periods can be crippling. Symptoms such as pelvic cramps, nausea and bladder and bowel problems can mean that days in the office or workplace can be at best, uncomfortable and at worst, unbearable.

In Australia, each year, endometriosis is estimated to cost $4.9 billion in lost productivity and $2.5 billion in Medicare and direct healthcare costs.

“Endometriosis is a gynaecological condition, where endometrial tissue, or the lining of the uterus, grows outside of the uterus, where it may form lesions, cysts, patches or adhesions in the pelvic cavity in particular,” A/Prof Gargett says.

“Pain and infertility are the two main symptoms of endometriosis. Even though it is outside of the uterus, the displaced endometrial tissue still responds to female reproductive hormones, meaning the lesions may bleed into the pelvic cavity during menstruation, causing pain and symptoms.”

A 2010 American study found that women with endometriosis missed work an average of 19.3 days of per year due to treatments, surgeries and recovery.

Worryingly, 69 per cent of the 107 women with endometriosis surveyed in the study said they continued working despite feeling pain, a phenomenon that has been termed ‘presenteeism’.

Angela, a 37-year-old Melbourne woman living with stage four (severe) endometriosis, says that even when her symptoms are at their worst, the nature of her ‘invisible illness’ means she often finds it difficult to communicate to colleagues how she is feeling.

“I don’t like to take days off work, so I do the best I can without showing my workplace just how horrible I feel,” she says.

Since her diagnosis around 10 years ago, Angela, a printing project co-ordinator, has undergone multiple operations, including laparoscopies (keyhole surgery) to remove endometriosis from her pelvic cavity, and major surgeries, including the removal of a kidney, which all required days or weeks off work.

Angela previously worked as a gym manager and personal trainer, but found it increasingly difficult to fulfil a physically demanding role with chronic pain, and she eventually changed careers.

“My energy levels just weren’t coping with the hours and type of work required as a personal trainer,” Angela says.

Angela believes that there needs to increased awareness of endometriosis in the workplace, and amongst the general population.

“Endometriosis is still seen as a ‘girly problem’ and not taken seriously,” Angela says.

Such is the impact of menstrual conditions like endometriosis, that workplaces in some countries have instituted ‘menstrual leave’ policies. Japan, South Korea and parts of China have had such arrangements in place for years.

Some women in North Asian countries where menstrual leave is a legal right say they don’t like to take menstrual leave days, either for fear of social stigma, or because it may affect their income.

In March, a bill was introduced into the Italian parliament to create a mandated three days’ paid menstrual leave per month for women in that country.

Under the policy, women who are menstruating or experiencing menopause are entitled to work in a quiet and comfortable place in the office, work from home, or, if the pain is severe enough, take a ‘menstrual leave day’, with a maximum of 12 paid days per year.

“We have been trialling this policy for 12 months and I can say that there has been a positive take up in the spirit in which it was intended without disruption or dislocation,” said Executive Director Mary Crooks AO.

But what about women in Australia who don’t have access to menstrual leave, and who take sick leave to manage or treat menstrual conditions such as endometriosis?

“If women feel they have got an understanding boss, they could explain their absenteeism, and secondly, they should go and see a gynaecologist who specialises in endometriosis,” Associate Professor Caroline Gargett says.

Gargett’s laboratory at the Hudson Institute is examining the role of endometrial stem cells, which enable the growth of normal endometrial tissue each month and most likely endometriosis lesions, in the hope of finding new treatments for the condition.

“More research needs to be done to find better treatments so that every woman with endometriosis can fully participate in the workforce as they choose and to the best of their ability,” she says.

Would you take advantage of menstrual leave if your workplace had it? Or if you’re an employer would you look at introducing it?