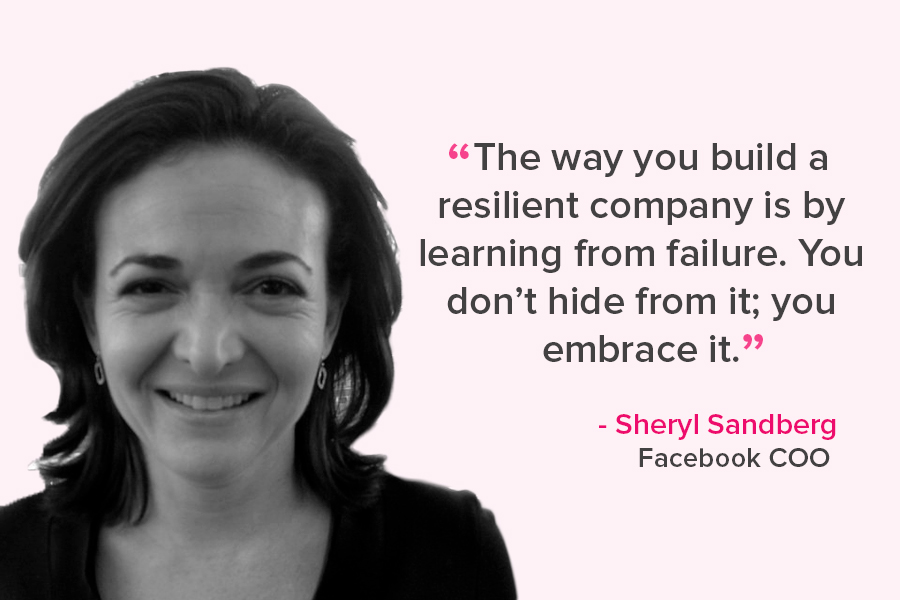 If you haven’t started listening to Masters of Scale, add it to your podcast playlist stat. Host and co-founder of LinkedIn, Reid Hoffman interview entrepreneurs, game-changers and thought leaders on how they’ve successfully scaled up their startups and companies. In the latest episode, Hoffman chats to Facebook COO, Sheryl Sandberg about how to lead through fast-paced growth and his theory that “great leaders don’t just make plans, they break them.” Read on for Sandberg’s best advice on creating a resilient culture, hiring for startups and the importance of asking for feedback.

When Sandberg first started at Google, she led a small team of four. By the time she left it was 4000. Initially, they celebrated every staff member’s birthday, a perk she pivoted on when it quickly became unsustainable. Sandberg advocates looking at your systems with an eye on how you want it to operate in the future, and implement them now.

“Eventually, we had a huge sheet cake with quarterly birthdays – my team was 4000 when I left – with everyone’s name’s on it,” Sandberg tells Hoffman. “Now it sounds like that wouldn’t matter, but it did, because if you started out and we celebrated everyone’s birthday, and we took that away, that was a problem. Now I’m not saying, ‘Be mean and don’t celebrate birthdays,’ I’m saying figure out what your systems are going to look like later, and do it now.”

2. Know when to pivot

“When our team was growing, I interviewed everyone who joined globally and when we were at 100 people I noticed that the queue for my interview was holding up our hiring process,” Sandberg says about her time at Google. Knowing this was unsustainable; she met with her staff about pivoting on her promise to interview every staff member. Instead of pushing back, her team applauded her decision. “I thought to myself, ‘I’ve become a bottleneck, and you didn’t tell me, and that’s on me.”’

3. Create an environment where people can speak up

She didn’t learn that staff had taken it to mean it “No PowerPoint presentations, ever” until she was about to speak at one of Facebook’s global sales conferences. “I got on the stage, and I said, ‘One, I’m sorry, I didn’t mean that. Two, it is on me that if you all thought that, and that was a stupid idea, you need to speak up and tell me,’” she says. “It was just a really good lesson that I needed to be super careful that things didn’t get taken too far, but also that I needed to make sure people could speak up.”

“I realised I needed to make it safe for people to speak up when I was messing up.”

“You have to embrace organisational failure. You have to sit down and debrief when things go wrong. Why did they go wrong? What can we learn and what can we do better? It’s organisations that hide things under the rug that don’t create the resilience because they don’t learn.”

“We needed to hire really quickly, so we started the temp-to-hire program. We just hired people as temps, and then we would evaluate them over the next one month, two and three months and then would convert them if successful to full-time,” Sandberg says about growing her team from four to 4000 at Google.

“It was a great way to scale in those early days when we needed a lot of work done very quickly. It also got us to hire people we wouldn’t have otherwise hired. People who didn’t necessarily have the right background that Google was always looking for, but they came in and did great work.”

Sandberg and Mark Zuckerberg established what their working relationship would look like look at Facebook, long before they started working together. It was Sandberg’s late husband and CEO of Survey Monkey, Dave Goldberg, who helped them create the culture where they could “dare to disagree.”

“Dave said, ‘what you want from Mark is process agreement on how you will work things out. Because even if you work all the questions you have out now, they’re going to change.’”

They decided to have the first meeting on a Monday morning and last meeting of the week on a Friday afternoon. “I asked him for feedback. I gave him feedback,” Sandberg says. “I make mistakes all the time,” says Sandberg, but the key to being a better leader is “being open to feedback, [and] thanking people for the feedback.”

“The way you build a resilient company is by learning from failure. You don’t hide from it; you embrace it.”