You might recognise the pair from tonight’s episode of Shark Tank. 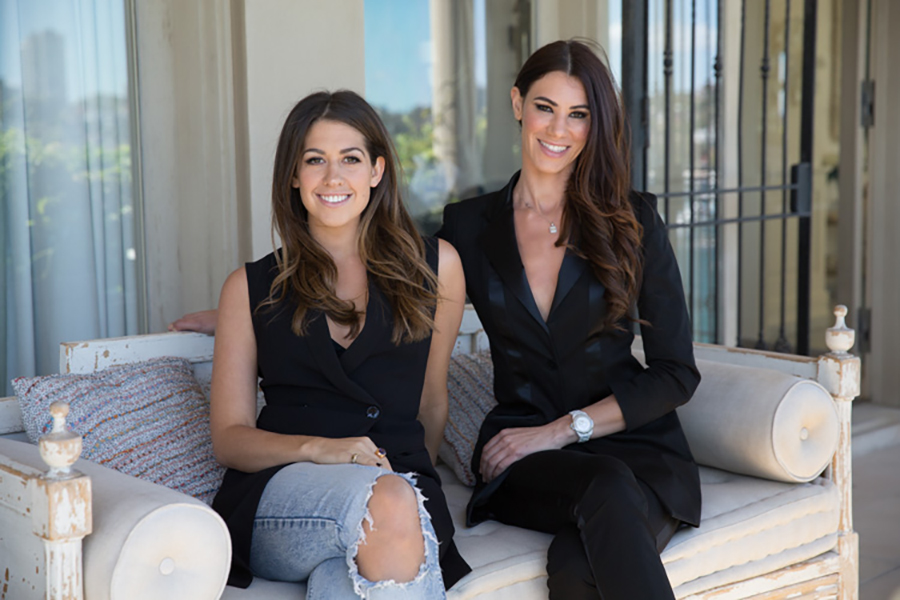 We talked to former competitors, Lauren Silvers and Lisa Maree, about how they joined forces with their beauty app Glamazon, Australia’s first real-time marketplace for beauty bookings.

What were you both doing before Glamazon?

Lisa: I have another business, a fashion label called Lisa Maree, and I’ve had that for over eight years now. I still own and run that business, and have five offices globally, but I’m a little bit more removed, because my energy now is focused on Glamazon.

Lauren: I was working in PR before I started Glamazon. It was one of those things that it started out as work experience when I was 16, and then I extended my work experience in the school holidays and just never sort of left the industry. Then moved to New York to do PR with a woman called Kelly Cutrone, and worked at New York fashion week. And just really loved the industry. I became accustomed to constantly getting beauty appointments and nail appointments and hair appointments, because I had to look polished for all the events that we had.

I was 23 at the time, and I would always struggle to book in beauty appointments. Uber had just launched in Australia and I remember leaving a meeting and booking an Uber and getting really frustrated that I could see where all of the taxis and the black cars were at the time, and not being able to find where all of the available salons were at the time. I started to do some research to see if anything like that existed, and nothing did. So I just set out to build it.

Lauren: After I had launched in 2014, I rapidly discovered that I was really good at getting the PR, and I was really good at getting salons onboard. But the way that I had built the platform wasn’t working. In the sense that I had signed on 200 salons manually myself, but because it wasn’t integrated with the salon diaries, it just was sending double up appointments and it was annoying salons. But I kept it going and just did a lot of market testing for a year, and then started building relationships with the software companies that the salons had to manage their computerised diary systems. And I thought if I could integrate with those systems, then I’ll have that real-time data.

So those relationships, took me a couple of years to really nurture and finally get an integration, but I realised in about 2015 that customers really want peer-to-peer services. So I started to explore the whole idea of fitness at your doorstep. So we were booking in a yoga studio or a Pilates studio, but also getting someone to come to you. So I started to talk to personal trainers, I started to talk to Pilates instructors. And this whole idea, this mentality of peer-to-peer services was getting stronger and stronger.

And then it got to 2016 and I really, really wanted to explore at-home beauty services, but I knew I didn’t want to build it from scratch. Because I’d been in the game for two years almost doing the salon side and I knew how long it takes, and just how focused you need to be on one thing. I knew focusing on both salons and freelancers by yourself as a one-man band is pretty impossible. So Lisa and I were introduced to each other, and she was doing an amazing job of tackling the freelancer space. I still had by that stage hundreds of salons. And we were fulfilling lots of appointments every week. And even though there were still a lot of manual processes still involved, I didn’t have the funding to make a perfect technology platform like we do now, it was still working. Lisa and I combined forces and rebuil, and now here we are.

How did you come together? Did an investor introduce you?

Lisa:  It was, it was so interesting because I’d just launched Glam Crew here in the middle of last year. And I was speaking to someone I knew who had a friend who was an investor who was interested. I met with him, and we had a little chat and he said to me, “I know I want to do something with this, but I just don’t know what it is.” And so we sort of parted ways on that sentence. And then I got a phone call a couple of days later by the same investor saying, “I’ve done my due diligence on you, I’ve done my research, and I’ve found a company called Glamazon. I really want you to meet Lauren who’s the owner of Glamazon, and if you two merge, I’ll invest.” And so that led to the inception of our joint company and our merge.

How did you both overcome that feeling of wanting to protect your own brands? How did you navigate your early business relationship?

Lisa: It’s actually really funny our story, because Lauren and I live about two streets from each other in Bondi, and we belong to the same business club and we have all the same mutual friends. I lived overseas for five years recently so I kind of was out of the loop. So I’d just moved back to Australia and was introduced to Lauren. And we met at the business club that we both belong to, to have our first chat. And then a week later we met at Harry’s in Bondi for a coffee, and shook hands on a deal. So it was like divine intervention, it just flowed and it was meant to be.

Lauren:  It was very easy, I think. It really reinforced this idea to me that timing is everything, and there’s a lot of research into the success or failure of start-ups. And they say the number one reason for success is timing. Whether the market’s ready for something or not, and how quick you execute on that. And I think for us the timing was really perfect, and we just both saw such … I don’t know, such synergy, and we knew we could work together really well.

Lisa: In terms of protecting our brand, I think both of us were open to whatever was going to work out best for the business. And to that point, we actually got our investors to help us decide us what to do. And so they gave their objective opinion. They want the business to work out as well, it’s in their best interest, so they gave their opinion on it. And we sort of agreed and yeah, I think you have to remove all of that stuff about ego and protecting your own assets. And just go, ‘what can we do to make the business succeed?’ Not pander to our own needs to fulfil our own brand name for instance.

How did you prepare for Shark Tank? Did you both get accepted?

Lisa: It was so funny because before we merged I’d applied for Shark Tank, and Lauren had applied for Shark Tank for our separate businesses. And then the funny thing was we both got through. When we got the phone call that we’d got through, we’d merged by then. And then I said to Lauren, “I got through.” And then Lauren said, “Oh, well I got through.” And then we had to tell Shark Tank that we’ve merged entity now. And they said to us it was the first time that they’ve ever had two separate applications that have come through that have been successful and they’d become one company by the time the show gets filmed. So it was like a really unusual circumstance.

Lauren: Shark Tank was the catalyst to us learning more about our business than we actually knew at the time. You sort of get so stuck in running the business and so in the business, that you’re not always taking a look at what your numbers are and optimising that growth, because when there’s just two of you, you don’t always have the time to focus on optimisation when you’re just focusing on testing, or putting out buyers, or just making things work.

So I think that Shark Tank was really great, in that we got the opportunity to sit down and look at our numbers in detail, and learn so much about our business. And we were really impressed with our numbers. I think it hit us, we were really excited to go into Shark Tank because we really believed in our product so much more after seeing the numbers.

Were you surprised by the reactions of the Sharks?

Lauren: That’s a hard question to answer, because we were really confident in our product, and we knew it was a good product. So we were hoping they would have a great response to it.

Lisa: Yes, I guess you just never know, and you see so many pitches go wrong. I know I watch Shark Tank and I’m like rooting for a business, I’m like, “Oh it’s so great,” and then one Shark will come out with a comment. And you start to think, “Oh wow, yeah, they’re right. I didn’t think of that.” And you just don’t know what they’re going to ask you. But I think we were quietly confident because we have a genuine working product, so there wasn’t anything we were scared of or had to hide.

What’s next for you guys?

Lauren: We’re working towards a break-even point. I think it’s very unusual in this tech start-up age, everyone sort of raises money and is working on valuations, and getting those valuations really high. We go the opposite way where we’re like, let’s just get our revenue really high, break even, so anything else after that is a bonus. So for us, working towards that next year is really exciting, and then we do have some ideas about expansion. But we’re really focused on Australia still, I think it’s a huge market. It’s a $5 billion plus market, and it’s growing every year.

Lisa Maree and Lauren are joining us at 9 to Thrive in Melbourne, for more info and to grab your ticket, head to our 9 to Thrive page now.