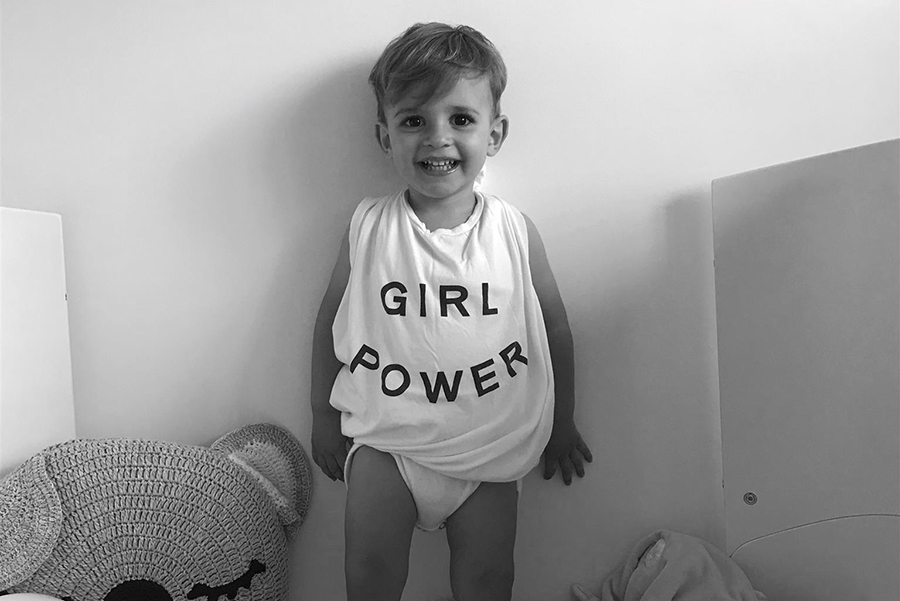 I always knew I wanted to be a mum. And whenever I thought about myself as a mum, I imagined I’d be a mum to girls.

Girls, women; they’re kind of my thing. As the daughter and granddaughter of two very staunch feminists, I grew up being told – and shown – that women could do anything, and I guess I wanted an opportunity to bring up my own daughter believing that too.

When I fell pregnant in 2015, as soon as I saw those two pink lines, I knew that I was having a boy. Sounds a little woo woo writing it, but I just knew. At 10 weeks pregnant, I had the blood test and what do you know? A boy was on its way. This probably breaks some unwritten rule of motherhood, but I was disappointed – there would be no daughter to buy ‘Girl Power’ t-shirts for and dress up as Frida Kahlo during book week. Sigh.

My son Max arrived and of course I fell dangerously in love. And I don’t know when it dawned on me, but I realised that perhaps the responsibility of raising a son who believes that girls can do anything was just as important, if not more, than raising a girl who does. Because although we tell our girls they can do anything, the reality is we live in a world where in many cases they can’t. I want Max to grow up to believe that girls are his equal, but I also want him to act on that belief too – that’s what’s important. As a white male growing up in Australia, you Max my dear, have privilege and power beyond a lot of people’s wildest dreams. And I hope that you become a young man who uses that for good. A young man who speaks up when things are wrong, who supports women and backs them and is even willing to give up a little of the power you possess to make the world a more equal one.

I want Max to grow up to believe that girls are his equal, but I also want him to act on that belief too – that’s what’s important.

Max turns two this month and I know we’ll be in for another influx of diggers, cars, trucks and trains. I know that if he takes his ‘baby’ to the shops people will comment and if he dresses up as the female Paw Patrol character over the others, people will look twice. It’s become clear that as well as smashing stereotypes and opening up the world to girls, we need to do the same for our boys if anything is going to change. Gloria Steinem put it perfectly when she said, “I’m glad we’ve begun to raise our daughters more like our sons, but it will never work until we raise our sons more like our daughters.” Max, in our house it’s ok to pick the pink plate. It’s ok to cry if you fall over and ask for a cuddle, yes Emma Wiggle is a hero and boys will not ‘be boys’; they’ll be kind and compassionate and good humans.

If I’m lucky enough to have more children, I have a strong sense they’ll be boys too. I know, I know stop with the woo woo already, but I seriously have such a strong feeling. I don’t think I’ll ever have my own little Girl Gang, but maybe it’s my job to raise a little Boy Gang who know you don’t mess with Girl Gangs. Ever.

Rebecca Bodman is the Director, Community and Brand at Business Chicks and Editor of Latte magazine. Connect with her here.