“I struggle to think normally” 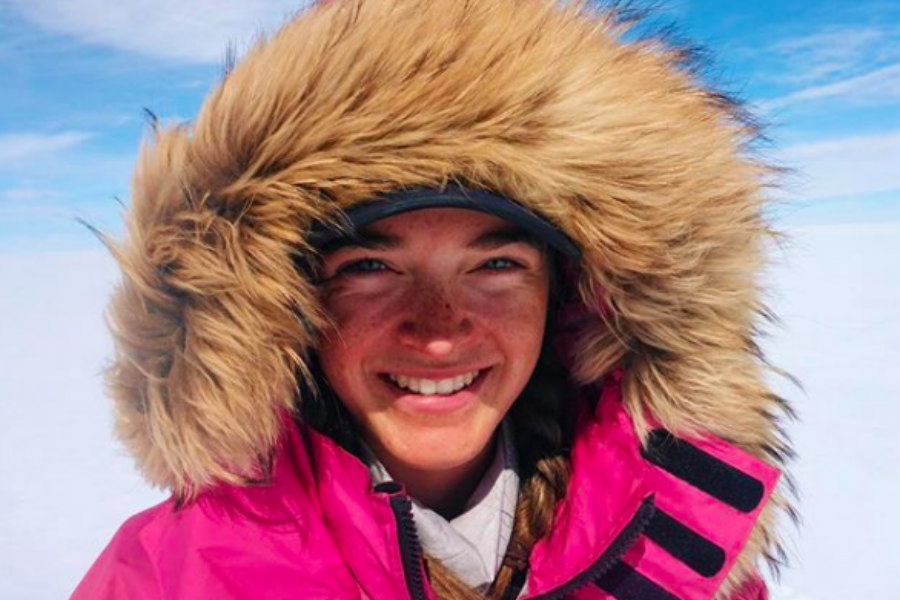 Meeting Jade Hameister, you can’t help but wonder what’s going on inside her head. As we sat overlooking the Sydney CBD, I imagined what she would be thinking of this city.

People, heads down, rushing through the city. Car horns blaring. City air filled with cigarette smoke and dust from construction.

What would someone who had skied the North Pole, completed the Greenland Crossing, and then trekked the South Pole think of this world?

“Having so much time with the voice in your head and no distraction, you come back to constant distraction,” Jade says to me.

“Phone, school, people noise. It shocked me for the first little while. Now, I’m used to it but it took me a little while to adjust to this way of life.”

Last sleep before I head off tomorrow for my Antarctic expedition!!!! Hasn’t fully sunk in yet, but feeling all the feels today 😬 Going to miss my friends & family like crazy, but I know it’ll be over as quick as it’s come around.. All the prep is now done, so here’s to enjoying the final part of my polar dream! 🙃 #bravenotperfect #expandpossible #climatechange #jadesquest #thepolarhatrick #northpole #greenland #southpole @natgeo @natgeoau @australiangeographic

On the day I spoke to Jade, she was in the midst of an interstate media tour for her (first) book, My Polar Dream. Using a collection of her entries from the journals she kept on trips, Jade documents how she became the youngest person to complete the Polar Hat Trick.

At the age of 14, Jade decided this was her goal and for the past three years, she has worked relentlessly to this one goal. Whether it was pulling tyres along a beach for hours, competing in triathlons, or working out at the gym until her mental breaking point, everything had been for the South Pole.

Now, nine months on from conquering this dream, Jade says that it has been really difficult learning to live with no big expedition on the horizon.

“After the last trip, I was in a bit of a lull and that was a mental challenge, too. To bounce back from that I had to draw on some of the mental challenges I faced on the trips. I knew it was coming but now that it’s here…well, school.”

One of the most remarkable themes of the book is Jade’s commitment to authenticity. She doesn’t pretend as though she was a fearless warrior.

“Often when I first got into the tent at the end of the day, I was so cold and broken that I had to just sit there in tears and on the cold ground, fully clothed, with everything thrown into the tent around me, and not move until I recouped just a little bit of energy,” Jade writes in her book.

There were times when Jade couldn’t stop fighting with her dad, she held the group back, and guide, Eric, had to seriously tell her that if she didn’t pick up the pace, they wouldn’t finish the expedition.

The joy of eating lunch on the way to the North Pole in minus 30… The main goal is to not break a tooth on the frozen food while eating as fast as you can, to get moving and warm up again! #expandpossible #jadesquest #thepolarhatrick #northpole #greenland #southpole #girlpower #climatechange

To write so honestly – and brutally – on yourself takes guts.

“It’s a lot easier than trying to pretend to be someone who’s perfect – because no one is,” Jade says on writing about her weaknesses.

“A lot of the content in the book is from journals and [written] in the moment. A lot of it was my dad and I bickering. It was raw and reading back on that at home it’s stuff you don’t want to ignore. You want people to know about it because that’s the way it was. To pretend it all went smoothly, it wouldn’t be interesting.”

On the third expedition, her music stopped working so she walked for days with nothing but the sound of her own mind.

“The nothingness of your mind and the self-doubt would try and take over. Looking back, I don’t know how I did it but because it was so monotonous, the exact movement over and over again, you lose yourself.”

It was in those moments that Jade would find herself wondering why they were even bothering.

“If people didn’t actually care about the earth or the immense danger it was in, they wouldn’t bother to make any sort of effective change,” she writes in the book.

“I was so far into my head I was in danger of turning inside out.”

It’s a dangerous headspace to find yourself in at anytime, let alone five days into a 600 kilometre trek at -50℃ temperatures. Reflecting on this now, Jade says she has researched what she was feeling – ‘the overview effect’.

“…I discovered that astronauts often feel it, too. When they’re in space looking back at Earth and at the stars they realise just how small we really are,” she writes.

“It has completely changed the way I think about the universe and our place in it. It makes me think about everything I’ve done in the past, what I want to achieve in the future and whether it means very much at all.”

I ask Jade whether this feeling continues to grow the further away from the expeditions she gets.

“I was an over-thinker before and now I struggle to be present and think normally. I’m trying to get back into that but I don’t want to lose this perspective.”

Jade Hameister’s My Polar Dream is published by Pan Macmillan and you can get your hands on a copy, here.