24 mic drops from our Jamie Oliver breakfast in Melbourne

24 mic drops from our Jamie Oliver breakfast in Melbourne

“If I was in politics and the Business Chicks [community] came after me, I would sh-t myself.” 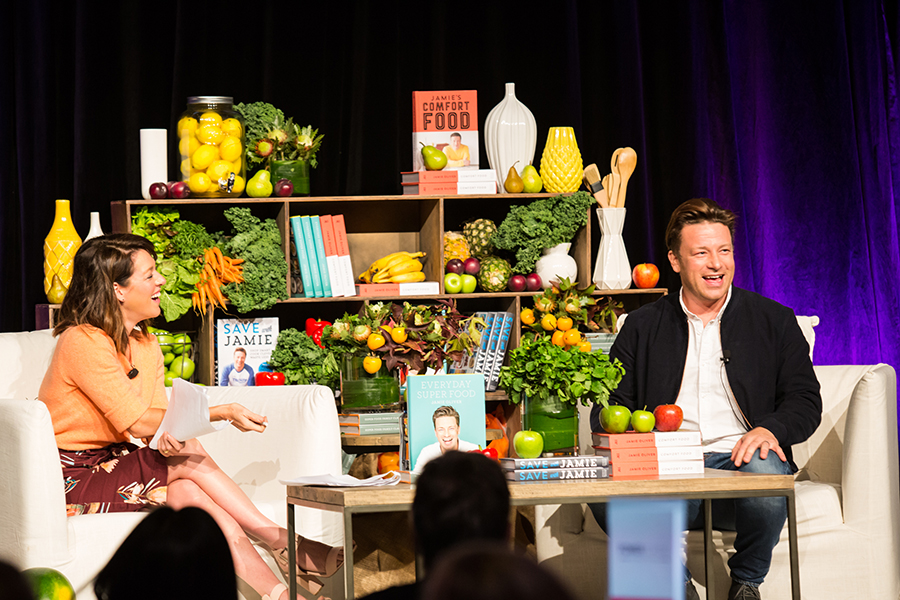 We’ve had some incredibly inspiring speakers on our Business Chicks stage, Brene Brown, Rachel Zoe, Julia Gillard, Arianna Huffington, and Nicole Kidman to name drop just a few, but probably no one who has used their celebrity to elicit the social change quite like Jamie Oliver has been able to do in his almost 20-year career.

If you weren’t one of the 700-odd mostly women who were at the Docklands on May 12, then this recap is the next best thing.

Over breakfast, Jaime talked for almost an hour about tackling childhood obesity, the sugar tax he helped implement in the UK, his the Ministry of Food, Food Revolution and Learn Your Fruit and Veg initiatives and why politicians should fear the Business Chicks army of powerful women.

Read on for our favourite takeaways from the original celebrity chef.

“My wish is to educate every child about food, and to empower people everywhere to fight obesity.”

“I’m doing this because I want the kids to eat better food. I want kids to be healthier, and I want them to grow up with better habits. I want us to have a f—king better, cooler, cleverer, healthier nation.”

“The capacity to be brilliant is limited by yourself.”

“I realised very early on that my boss – other than my wife – was the public. The public is my boss, and every business that I’ve ever worked with or collaborated with or represented, I would drop it all if it didn’t resonate because the public has to have the best truth you can find.”

“In the food industry, truth is the commodity in the shortest supply.”

“I think everyone always thinks I’m minted. But the truth is, I’m always overstretched, I’m always over-leveraged. The social work we do is always underdeveloped. I’ve never met a charity group or social campaign that punches so high on so little.”

“The transition of the Naked Chef was that cooking got you girls.”

“Men and women would go off and do 13-14 hour days, and all the men would turn around at night and say, “what’s for dinner?’ and the Naked Chef came out at the perfect time. Then women would say, ‘ Get the f—k up there and cook dinner.’”

“The men got it after two or three years. Now I’m quite proud of having a 50/50 audience. And I think that means that change has happened.”

“The problems are symptomatic. What’s beautiful is when it gets too hard, and the data gets so big, you bring it back to something that’s been grown. And that’s ultimately what the Ministry of Food is all about.”

“The problem in politics right now is that everyone thinks that teaching kids how to cook and how to grow food is a cute middle-class luxury. It’s not.”

“The further you take kids and community away from growing, the more unhealthy the planet gets.”

“When you look at really bad child health, and what does bad mean? It looks like a child who never has fruit and vegetables ever, ever. Is it common? YES.”

“Kids are not born to eat pizza. It’s marketing that makes them eat pizza.”

“I spent the last two years going around the world looking at the parts where people live the longest and looking at diet and lifestyle and the patterns that keep repeating, and basically it’s all about fruit and veg, and growing your own.”

“To consistently feed your child rubbish is child abuse in this day and age.”

“When I meet a politician who doesn’t speak up for fact and science, and kids it worries me a lot.”

“What I would love to do with Business Chicks, and what success could look like in two to three years, is that anyone who thinks childhood obesity is a myth gets booted out of government. Child health should be first.”

“If I was in politics and the Business Chicks [community] came after me, I would shit myself.”

“There should be a rule with vending that 50% is good food and 50% is bad food, but at the moment there is no choice, it’s all bad.”

“Our children’s generation is going to be the only generation that is potentially going to live a shorter life than us.”

Australia, every child deserves the right to learn about food,how to grown it, how to cook it and how it effects their bodies? Yes or no

We hope Jamie’s quotes resonated with you as much as they did with us and the audience who attended the event. We’re not done for the year with our stellar international speaker lineup, next up we have Harvard Business researcher and social psychologist, Amy Cuddy. Head over to our events page to grab your tickets now.