Julia’s off-the-cuff delivery is formidable. She barely looks at her notes; her impassioned fury is palpable; her blistering rhetoric is sharp-witted and smart. 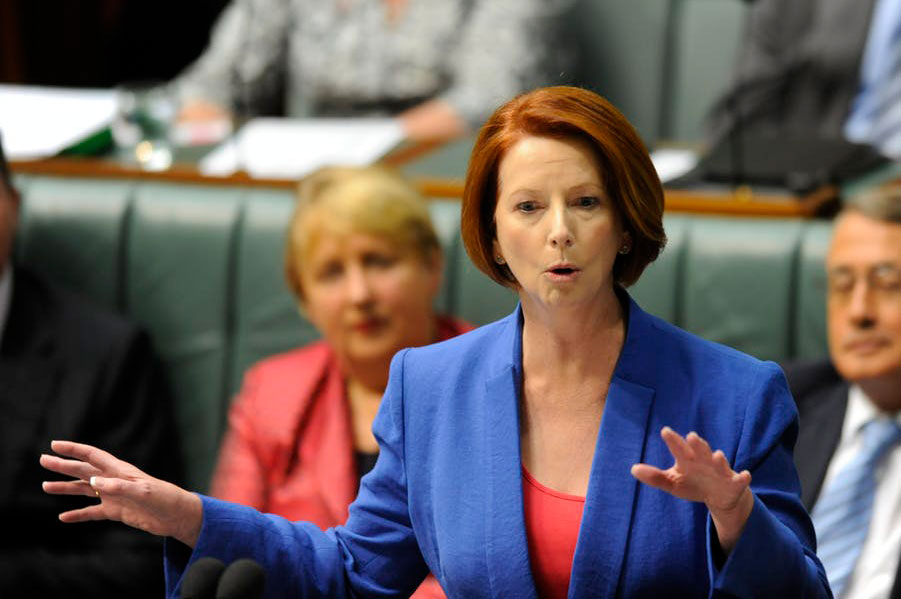 You know those moments in history when you remember exactly what you were doing when you heard the news? Former Prime Minister Julia Gillard’s misogyny speech was one of those moments. On 9 October 2012, I was working at a magazine in London when one of my colleagues yelled across the room, “Hey, Lucy! Your prime minister’s gone viral with a misogyny speech! It’s on YouTube!”

I looked up from my computer and saw my British colleagues (who, a minute earlier, quite possibly thought our prime minister was Alf Stewart) mesmerised by a blue-blazered redhead on their screen: then the most powerful woman in my country.

“Whoa … she’s really giving that guy a serve! The one that looks a bit like Gollum from Lord of the Rings,” someone commented.

Julia’s takedown quickly went viral and made headlines around the world. The ABC’s video of the speech has been watched more than 3.3 million times, and it was recently voted by Guardian readers as the number-one most unforgettable moment in TV history. It has its own Wikipedia entry, and the Macquarie Dictionary even updated its definition of the term “misogyny” after her outburst (previously defined as “hatred of women”, it’s now “entrenched prejudice against women”.)

The speech wasn’t even planned; Julia hastily scribbled down notes during Question Time as Tony Abbott was speaking. So, why did it resonate with millions of people, from London to Lombok? Firstly, everyone loves political theatre – especially when it’s a prime minister hurling fury at an opposition leader. (Oh, and calling him out for saying things like, “What if men are, by physiology or temperament, more adapted to exercise authority or to issue command?”)

Secondly, Julia’s off-the-cuff delivery is formidable. She barely looks at her notes; her impassioned fury is palpable; her blistering rhetoric is sharp-witted and smart.

Thirdly, female viewers connected to it because we all know what it’s like to experience sexism and misogyny. Julia’s frustration spoke to women around the world, and unlocked a sense of empowerment for us to call out sexism and gendered double standards in our own lives.

Eight years on, Julia travels the globe giving speeches on gender and leadership (including hosting Q&As with her friend Hillary Clinton), and she’s chair of the Global Institute for Women’s Leadership at King’s College London. She’s also releasing a book on leadership later this year. Reflecting on the speech, Julia told the ABC last year that she used to be resentful it overshadowed her other achievements; that it’s the number-one thing she’ll be remembered for. But today she’s proud of it – after all, it captured the world’s attention, threw a spotlight on sexism, and was even made into a song. As for Tony Abbott’s own raw moments in history? Well, he did eat an uncooked onion a few years later …