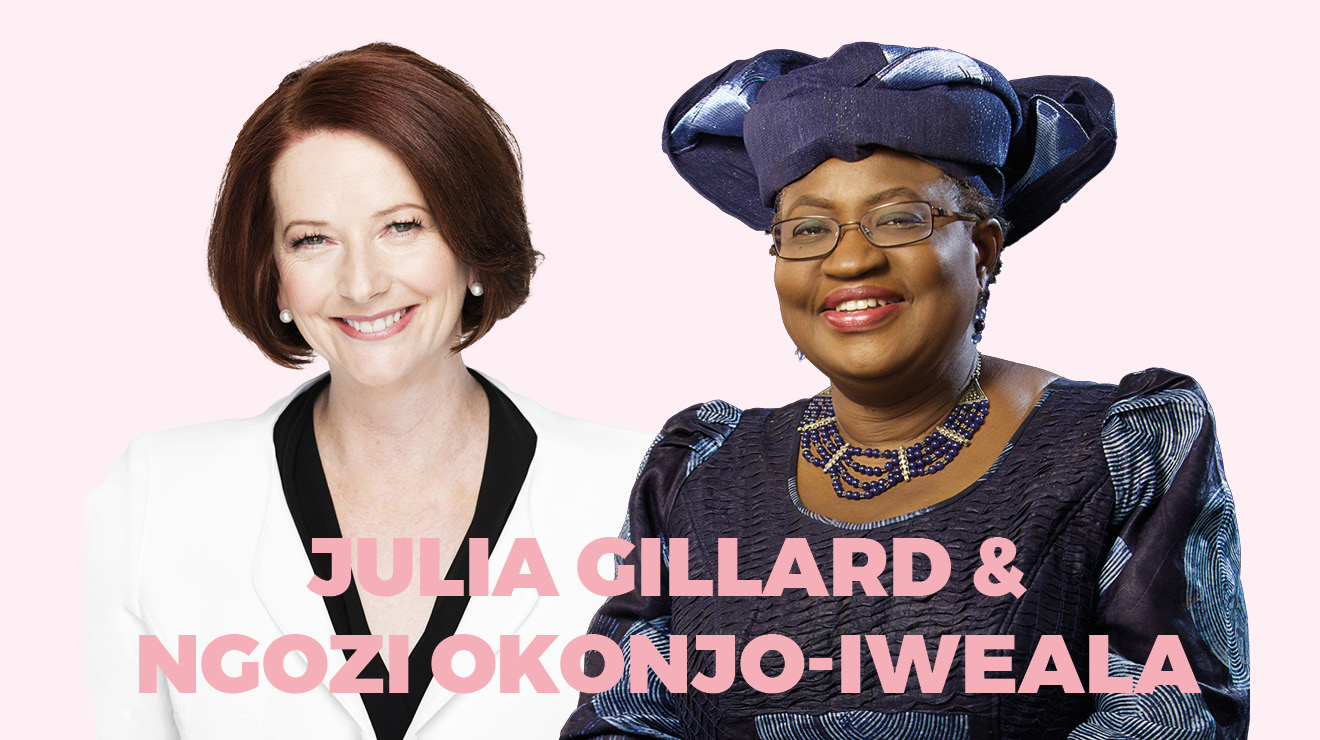 In just a few weeks’ time we were supposed to be touring the country with Julia Gillard to talk about her newest book, Women and Leadership: Real Lives, Real Lessons. But a certain something (ahem: COVID-19) had other plans that have pushed those events back to early next year. Every cloud has a silver lining though, and we think this is a big one. We’re thrilled to announce that Julia will be joining us virtually, along with her co-author Dr Ngozi Okonjo-Iweala, based in Washington, D.C., to share what they learnt while writing the book.

Both Julia and Ngozi have been the first woman to hold various powerful leadership positions, and for their book sat down face-to-face with other incredible leaders like Hillary Clinton and Jacinda Ardern, to understand their experiences and what we can learn from them. From their own careers on the world stage in politics, economics and global not-for-profits, they both have strong ideas about the impact of gender on how leaders are treated. This is your exclusive opportunity to hear from two seriously impressive leaders on the conclusions that can be drawn from the global research and real life experience about what it truly takes for women to succeed today.

Together they’ll talk about the influence of gender on women’s access to leadership positions, the perception of women as leaders, the trajectory of their leadership and the circumstances in which it comes to an end. And most importantly, unpack what all that means for your own leadership too.

Dr Ngozi Okonjo-Iweala is an economist and international development expert with over 30 years’ experience. She is Chair of the Board of Gavi, the Vaccine Alliance and of the African Risk Capacity. She is Co-Chair of The Global Commission on the Economy and Climate and also Co-Chair of the Board of Lumos, a small-cap renewable energy company. She also sits on the Boards of Standard Chartered PLC and Twitter Inc.
Previously, Dr Okonjo-Iweala was a Senior Advisor at Lazard from September 2015 – October 2019. She served twice as Nigeria’s Finance Minister, from 2003-2006, 2011-2015, and briefly as Foreign Minister, the first woman to hold both positions. She spent a 25-year career at the World Bank as a development economist, rising to the No.2 position of Managing Director, overseeing an $81 billion operational portfolio in Africa, South Asia, Europe and Central Asia.

Julia Gillard was Australia’s first woman to ever serve as Prime Minister or Deputy Prime Minister. In both roles she delivered nation-changing policies including reforming Australian education at every level from early childhood to university education, creating an emissions trading scheme to combat climate change, improving health care, commencing the nation’s first ever national scheme to care for people with disabilities, addressing the gender pay gap for social and community sector workers and delivering an apology to all those who had suffered through the practice of forced adoptions. In October 2012 she also delivered ‘that misogyny speech’ which received worldwide attention for highlighting the treatment of women in professional and public life.

She currently serves as the inaugural Chair of the Global Institute for Women’s Leadership at Kings College in London, is the Chair of Beyond Blue, one of Australia’s leading mental health awareness bodies; is Chair of global funding body for education in developing countries, the Global Partnership for Education; and is Patron of the Campaign for Female Education.