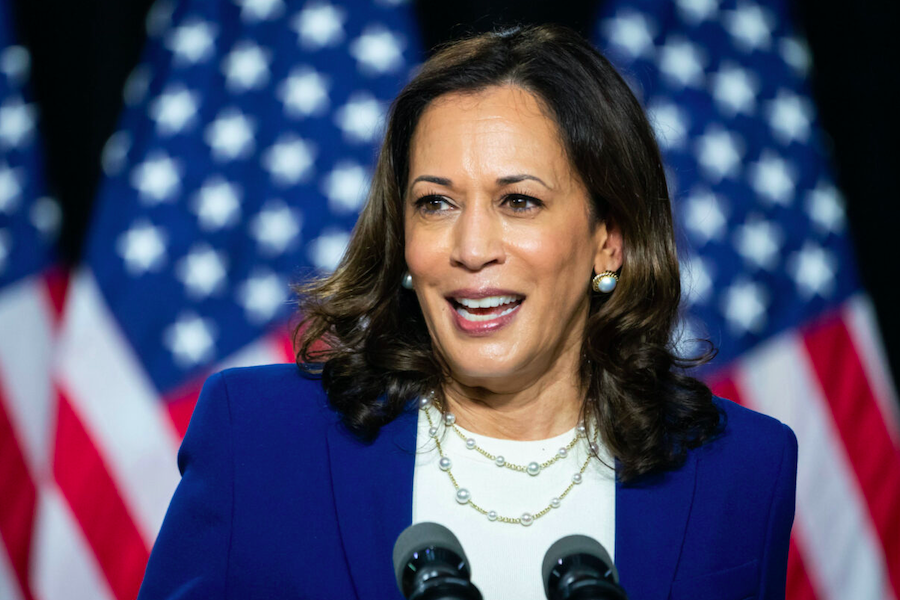 On the influence of her parents…

“My parents would bring me to protests strapped tightly in my stroller, and my mother, Shyamala, raised my sister, Maya, and me to believe that it was up to us and every generation of Americans to keep on marching. She’d tell us ‘Don’t sit around and complain about things; do something.’ So I did something. I devoted my life to making real the words carved in the United States Supreme Court: Equal justice under law.”

Source: First campaign appearance as the Democratic nominee for Vice-President.

“My mother would look at me and she’d say, ‘Kamala, you may be the first to do many things, but make sure you are not the last. That’s why breaking those barriers is worth it. As much as anything else, it is also to create that path for those who will come after us.”

“To the children of our country, regardless of your gender, our country has sent you a clear message: Dream with ambition, lead with conviction, and see yourself in a way that others might not see you, simply because they’ve never seen it before. And we will applaud you every step of the way.”

“There will be people who say to you, ‘You are out of your lane’. They are burdened by only having the capacity to see what has always been instead of what can be. But don’t you let that burden you.”

“What I want young women and girls to know is: You are powerful and your voice matters. You’re going to walk into many rooms in your life and career where you may be the only one who looks like you or who has had the experiences you’ve had. But you remember that when you are in those rooms, you are not alone. We are all in that room with you applauding you on. Cheering your voice. And just so proud of you. So you use that voice and be strong.”

“Anyone who claims to be a leader must speak like a leader. That means speaking with integrity and truth.”

“At every step of the way, I’ve been guided by the words I spoke from the first time I stood in a courtroom: Kamala Harris, For the People. I’ve fought for children, and survivors of sexual assault. I’ve fought against transnational gangs. I took on the biggest banks, and helped take down one of the biggest for-profit colleges. I know a predator when I see one.”

“Let’s speak the truth: People are protesting because Black people have been treated as less than human in America. Because our country has never fully addressed the systemic racism that has plagued our country since its earliest days. It is the duty of every American to fix. No longer can some wait on the sidelines, hoping for incremental change. In times like this, silence is complicity.”

“Every day, pregnant women walk into their doctor’s office for checkups, advice and treatment; but that experience is very different for Black women. Black women are three to four times more likely than white women to die from pregnancy-related causes and twice as likely to suffer from life-threatening pregnancy-related complications.”

“But now, because of the smartphone, America and the world are seeing in vivid detail the brutality that communities have known for generations. You can’t deny. You can’t look away. It’s there. I do believe people are seeing the injustice of it all and are prepared to take action in a way that we’ve not seen before. And that gives me hope.”

“We cannot tolerate a perspective that is about going backward and not understanding women have agency. Women have value. Women have authority to make decisions about their own lives and their own bodies.

“And let me just tell you, as president, I will fight every day for a woman to make the decision for herself, which means I will respect any woman who decides that is not the decision she wants to make, that she wants to make a different decision, but we have got to respect women in this country.”

“This virus has impacted almost every country, but there’s a reason it has hit America worse than any other advanced nation. It’s because of Trump’s failure to take it seriously from the start, his refusal to get testing up and running, his flip-flopping on social distancing and wearing masks, his delusional belief that he knows better than the experts. All of that is the reason that an American dies of COVID-19 every 80 seconds. It’s why countless businesses have had to shut their doors for good. It’s why there is complete chaos over when and how to reopen our schools. Mothers and fathers are confused and uncertain and angry about childcare and the safety of their kids at school. Whether they’ll be in danger if they go, or fall behind if they don’t.”

On the work that must be done…

“Upon being elected, I will give the United States Congress a hundred days to get their act together and have the courage to pass reasonable gun safety laws. If they fail to do it, then I will take executive action.”

“Our souls will be well when people know that they can feed their children. When they know that they can have a job that allows them to not only pay the bills by the end of the month, but to have a sense of dignity, in terms of knowing they’re providing for their families and creating a pathway for their future possibilities.”

Want more? Check out our recent chat with the legendary Gloria Steinem here, or find out more about becoming a Business Chicks Premium member, where you’ll be part of a community of thousands who want the best for each other, and for the world.