Turning baking into a career with Katherine Sabbath

Turning baking into a career with Katherine Sabbath 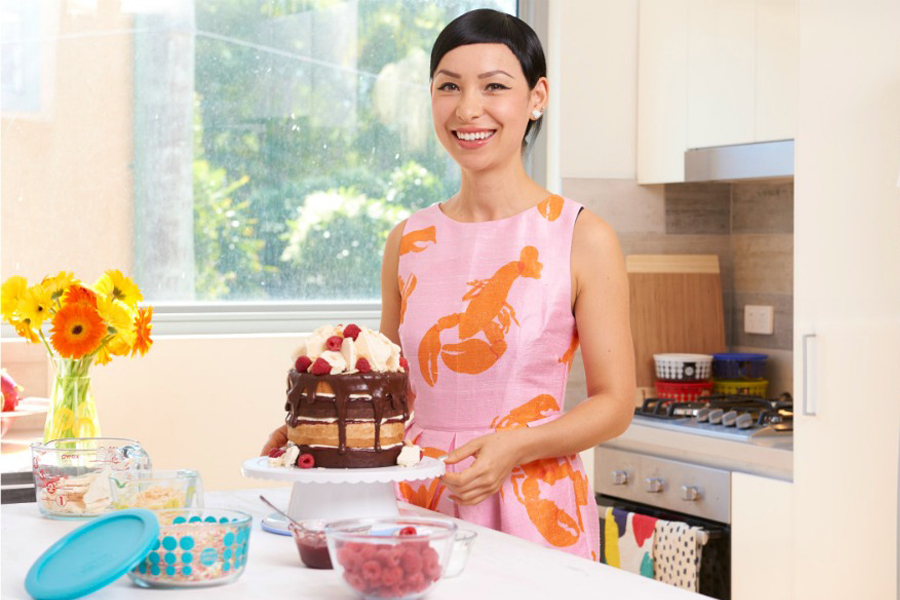 “There are lots of people who won’t like you when you’re being yourself, but they’re not people you want to connect with…”

In the world of social media, namely Instagram, Katherine Sabbath is kind of a big deal. With 281,000 followers (at last count), this vivacious home baker took a giant leap of faith, diving headfirst in to the dessert world to make her dream career a reality. Twelve months on, Katherine has worked with countless big brands, including Brown Brothers, CoverGirl, Frankie magazine, Pyrex and most recently, Darrell Lea.

She may be a rising star on the Australian food scene, but life wasn’t always covered in cheery rainbow icing and glossy gumdrops. Katherine’s journey has been a long one, from a shy, stuttering teenager who liked to bake, to the self-assured, empowered dessert queen she is today.

Katherine is every bit as sweet and lovely as her colourful cake creations. “If you work for yourself or do what you love, you will never have to work another day in your life,” she exclaims when we ask how her week has been. With a short, sleek haircut and a giant rubber teeth dangling from ears, Katherine is wearing a cute Gorman number and the brightest pink smile you have ever seen. It’s not hard to understand why brands are chomping at the bit to work with this super-gifted creative. She’s smart, she’s witty, she’s uber-talented and she’s 100 per cent genuine. What you see is what you get with “Kat”, as she prefers to be called.

“There are lots of people who won’t like you when you’re being yourself, but they’re not people you want to connect with and they’re never going to be your target market – no matter how hard you try to make them like you [so] work in a way that reflects your brand [and] you will only ever connect with people who truly get you. Those are the ones who are going to be the most important.” 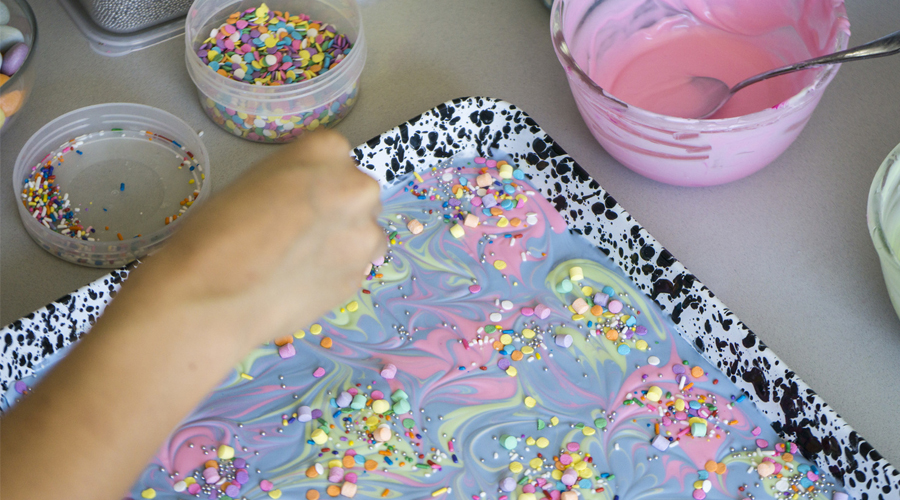 So who is Katherine Sabbath? When asked to describe herself in a recipe, she ponders the idea for some time before landing on this delicious concoction; a lot of dark chocolate (at least 90 per cent cacao), something really fudgy and caramelly, something crunchy, something acidic and tart like fresh raspberries, finished off with a scoop of really creamy vanilla ice-cream. Sounds like a tasty recipe for success if you ask us.

Kat grew up in the sleepy coastal town of Wollongong in the ’90s, where she was very aware of being “the only Asian in a predominantly white primary school”. Kat’s mother had escaped the effects of the Vietnam War, arriving in Australia to establish a better life for herself. She raised Kat and her brother in a very traditional Vietnamese household. I used to get teased for being Asian and being different. Maybe that’s why I was so quiet, but when you’re younger you just want to fit in and you don’t want to have weird things in your lunch box. Like, when your friends have butter and tomato sauce sandwiches, you just want that!”

A very quiet child who lived in her head a lot of the time, Kat says she always had a passion for fashion, art, drawing and tactile things. While she didn’t appreciate Vietnamese food growing up (she loves it now), she adored her German grandmother’s Western-style cooking. “[My Grandmother] cooked with butter and a lot of fat, whereas in a lot of Asian style cooking they don’t use much dairy because it’s such a hot climate. I loved my grandmother’s coffee cake and she always had a draw full of chocolates and biscuits. So every time I went to visit her, I used to have Western-style desserts and treats,” she says.

“Whenever I got really nervous, I would stutter, [which didn’t help with] the pressures of high school and trying to fit in. I would bring desserts to parties to help break the ice. It would take the pressure off me if I turned up to an event with food.”

Kat fell in love with baking while in high school, when she began lusting after chocolate and sweet things. “I could never find a chocolate brownie that had good-quality chocolate in it, or a caramel slice that wasn’t overly sweet, so I started experimenting and making my own. Eventually I got really good at it and would bring treats to school for my friends. They all loved it and I loved the reaction. I started giving [sweets] to friends for their birthdays. Their reaction really encouraged me to keep baking, try new things and ‘one-up myself’ each time.”

A severe stutter meant Kat went to speech therapy throughout primary school. “Whenever I got really nervous, I would stutter, [which didn’t help with] the pressures of high school and trying to fit in. I would bring desserts to parties to help break the ice. It would take the pressure off me if I turned up to an event with food.”

Growing up, Kat didn’t have any home-baking role models. The only female cooks in Kat’s world were Martha Stewart, Donna Hay and Nigella Lawson, and there was no way she ever imagined she would reach their status. It was only ever just a “pipe dream.” With both parents coming from humble backgrounds (her father’s mother fled Germany during WWII and was a single mother to four boys), Kat’s career choices were guided by their struggles. She also felt a lot of pressure (the good kind, she would say) to make them proud, as they had sacrificed so much for her and her brother. After graduating high school, Kat pursued a career in education. She completed a Bachelor of Arts, majoring in Education and English Literature, and an Honours Graduate Diploma of Education, focusing on Society in Culture and English. She then moved to Sydney and began teaching English. 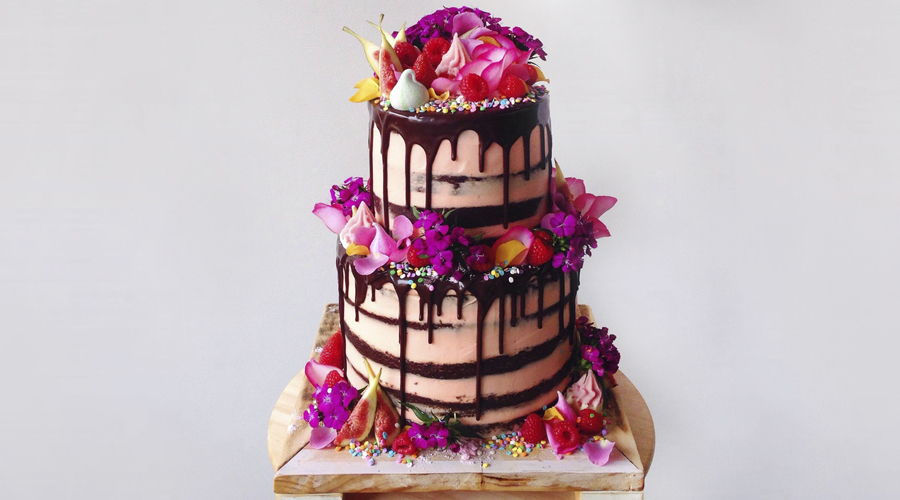 Kat soon found herself teaching full time and baking in her spare time. “When I was working I would get requests for cakes and wedding cakes, which I did purely to satisfy that creative part of me, knowing that there was no way I could profit [from] this full time. But then brands started contacting me to work with them, Brown Brothers flew me over to their vineyard in New Zealand and shot an ad with me and 10 creatives drinking wine. So things just started to get bigger and bigger, and then [took up] any personal time I had outside of teaching.” It took Kat two years to convince herself that she could make a viable career from baking. “I say that I dived head first in to the dessert world because that’s what I really did. I didn’t have anything lined up. I had saved a month’s worth of rent and I just did it. I left full-time [work] and jobs started to trickle in.”

“I just kept saying yes to things and have never really had any time off for the past year, which is really lucky.”

Branching out and starting a business from scratch was a huge learning curve for Kat. Outside of securing work and being innovative with her designs and flavour combinations, she had to learn how to run a business. “I had to work super hard for myself and learn things that I hadn’t factored in, like how to create an estimate, negotiate contracts and put a figure on what I’m worth. [Monetising my offering] was really, really hard.”

Kat, however, is part of a new breed of creative entrepreneurs building a brand in the digital age, where tools, connections and support are only a thumb tap away. “Being online and on Instagram has helped me connect with so many people who have helped with so many small things, like how to get wholesale ingredients or where to buy this or that product. Also with big things, like suggestions for a studio space or pointing me in the right direction of a manager. Or say I need help with contracts, [I can ask]: ‘Can someone who knows about that field in law help me with that?’” Kat also credits Instagram for being the catalyst to getting her brand known.

“I would say [Instagram] is definitely the thing that put my work out there because I didn’t have the confidence before,” says Kat.

“I was essentially uploading my portfolio without even realising it. When I realised that people really loved what I did, then of course I rode that wave of praise and encouragement, and I really enjoyed it. I had no idea that I could connect to so many people because I had never put myself out there before.”

Instagram also provided Kat with the essential “aha moment” – the point when she realised she was on the right track with her brand and her business. “Oh!” she squeals with excitement, “I’ve got a really good aha moment! When Adriano Zumbo started following me on Instagram, that’s when I thought, ‘I’ve got the tick of approval from one of the best pastry chefs in Australia’. I screen-shotted it [and], thinking ‘If he wants to look at my work, it looks like I’m on to a good thing.’”

Learning how to balance the creative nature of her business vs. running the business has been the biggest challenge for Kat. “I found that to be the most difficult aspect of being self-employed and pursuing this as a career path. I have always loved being creative and baking because it makes me and other people happy. Then when you bring money into the equation, it does mean you are constrained.” Balancing the client’s expectations and budget while ensuring she still does great work has also been challenging.

“I have to admit at the beginning I was taken advantage of because I felt like, ‘Oh, I’m getting paid for what I love and I should be so thankful – I can’t ask for more.” I found myself working really hard and I didn’t have any time for myself. I was saying yes to so many menial jobs that didn’t allow me to grow or expand my work. Now I am learning to charge per the hour. I love what I do, but I also love being creative – there is only so much you can give before it’s not enjoyable.”

So after a hugely successful year, what does Kat have in store for the next 12 months? “Personally, I hope to be more mindful about what I’m doing. So instead of thinking months ahead in terms of my schedule, I hope to savour what I’m doing day by day and look after my health.”

This year’s business goals? “I hope to connect with more home bakers. Not just within Sydney, but also overseas. I’d like to have my own studio space where I can host classes and shoot videos, and eventually have a book – that would be really cool. I’m trying to focus less on the small stuff and making money week by week and [instead] do exactly what it is I love to do, even though I know it’s going to take me a while to get there. I’m going to stick with what I love and know it’s OK to not be successful at first. I’ve got a long-term goal that’s more important than all the small goals put together.” Well, Katherine, we think you’re pretty awesome – you’re lovely, you’re talented and you’re sure as hell baking this world a better place.