One giant leap forward for humankind and a giant demonstration of all that’s wrong with the online world. 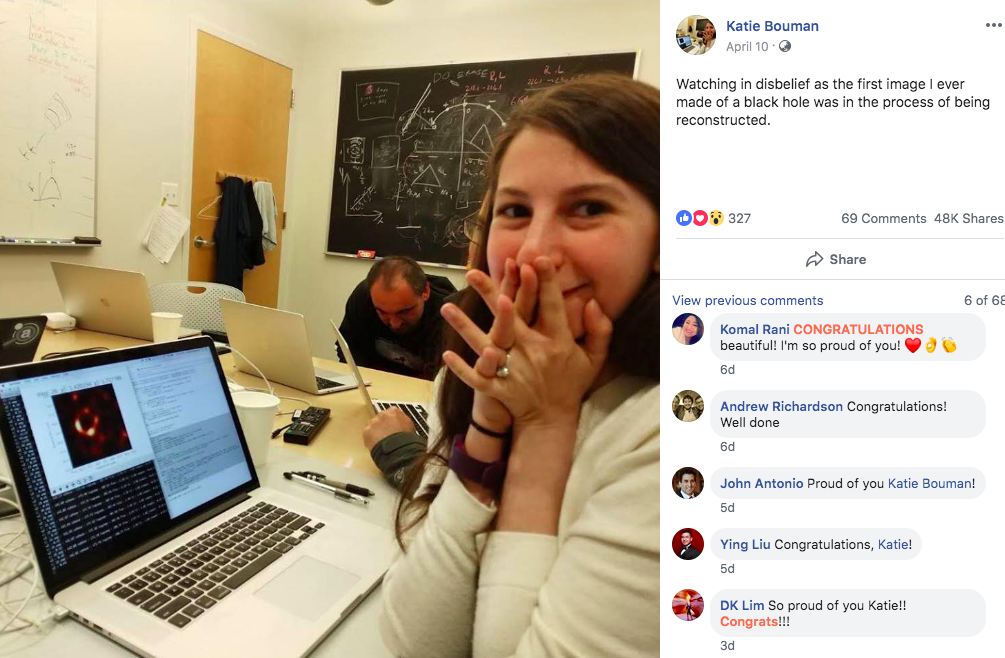 Last week’s first ever photograph of a black hole should have been cause for celebration. Instead, it became a gender debate.

Because the face of this discovery? Well, it clearly wasn’t male.

The face of this achievement belongs to Dr Katie Bouman.

Three years ago, as a 26-year-old MIT student with no background in astrophysics but a degree in electrical engineering and computer science, she led the creation of an algorithm that was key to capturing the stunning image.

Here’s the image that captured the attention of the world, perfectly encapsulating the elation, the joy, the emotion, and the gravity of the discovery.

Search Dr Katie Bouman in Google and this isn’t the story you’ll find at the top of the search results.

Or worse, type her name in to Youtube and you might be unlucky enough to see these…

Dr Katie Bouman and the first ever image of a black hole have simultaneously become a giant leap forward for humankind, and a demonstration of all that’s wrong with the online world.

From the deep dark hole that is the Internet, this sudden fame for a young woman who dared to participate in activities historically understood as the ‘men’s domain’ couldn’t stand.

Research by The Australia Institute in January this year found women are more likely to have been harassed online with women generally more likely than men to experience  threats of violence or death threats, threats of being followed or stalked, or threats of sexual assault.

As a modern psychology practitioner and leadership strategist, I know from my work with women that this hostile environment which serves to silence women’s achievements perpetuates the precise cycle that’s stopping women from putting themselves out there in the first place.

So, why is this happening? And how can you, as a woman, navigate this conundrum and own your achievements?

Problem one: We’re simply not used to having women as the face of tech or scientific breakthroughs, and as a result they face more scrutiny.

Studies have shown that unconscious bias is rife in the workplace and the online world.

Gender stereotypes can be easily spotted in the language that we use, and it is the way we perceive women in the workplace, and the position that we expect them to hold, that leads to our perception of events.

Our brains are hardwired to feel comfortable with what we know, and to question when we see something that doesn’t align with our expectations.

Perhaps this is why when Katie’s face wasn’t the one we’d traditionally expect to see headlining this discovery, people began going over her work to see how much she’d really contributed to the project.

There must be a catch, right? How could a woman possibly be behind this discovery?
The trolls focused in on one of her colleagues, Andrew Chael, who was listed on GitHub as the primary developer for one of the algorithms that revealed the black hole, and started circulating his picture instead.

Chael himself told The Washington Post: “It was clearly started by people who were upset that a woman had become the face of this story and decided, ‘I’m going to find someone who reflects my narrative instead.”

(1/7) So apparently some (I hope very few) people online are using the fact that I am the primary developer of the eht-imaging software library (https://t.co/n7djw1r9hY) to launch awful and sexist attacks on my colleague and friend Katie Bouman. Stop.

What’s more, Wikipedia had to block the right to edit a page on Dr Bouman, citing “persistent IP vandalism”. The site’s editors noted that one person was “obsessed with adding the irrelevant fact that she’s childless”.

The deeper trouble with all this is…

Problem two: Women are already reluctant to put themselves out there due to fear of being rejected or judged, or worse: trolled.

To really get ahead as an industry leader, or leader within the workplace, you need to be seen. Being visible at work allows you to demonstrate your skills, land prominent assignments, build strategic relationships, and share your expertise.

For women, however, the importance of visibility creates a conundrum.

If women try to make themselves more visible, they can face backlash for violating expectations about how women should behave, and risk losing their hard-won career gains.

While Bouman should have been sipping champagne and celebrating with her team, she was forced to address the backlash on social media and wrote in a Facebook post:

“No one algorithm or person made this image, it required the amazing talent of a team of scientists from around the globe and years of hard work to develop the instrument, data processing, imaging methods, and analysis techniques that were necessary to pull off this seemingly impossible feat. It has been truly an honor, and I am so lucky to have had the opportunity to work with you all.”

God forbid she just own it.

Here’s where it gets tricky to gain ground…

Problem three: You can’t be what you can’t see, so we need women in the spotlight

As human beings the biggest story we run in our heads that influences the way our lives play out is ‘people like me do things like this.’

Because we tend to relate more easily with those we perceive as similar to us, we need examples of high-visibility leaders to role model. We need to have the numbers to become the norm.

Congratulations to Dr. Katie Bouman, who developed the algorithm which captured the first ever image of a black hole! You are an inspiration to all Americans and especially to young women and girls with STEAM dreams! https://t.co/OPV0X55lcc

But Dr Katie Bouman is a shining example of why women might like to hide away and opt for ‘intentional invisibility’.

So, what can we do about it?

How can take more women from hidden gems to highly visible leaders and ensure their talents are recognised, minus the fear and doubt?

Open up networks and shine the light on our female leaders.

Create channels for more women to be featured as expert sources in the media.

As we’ve seen in this example, Andrew Chael sent a strong message to the world when he outwardly jumped in to back his colleague.

Saying that Dr Bouman was part of a larger team doesn’t devalue her input and impact. Highlighting the achievements of an intelligent, enthusiastic scientist does not degrade what the other 214 people who worked on the project have achieved, either.

Get clear on your unique strengths

Too often women think if we work hard, people will eventually notice and opportunities will come our way.

The reality is, attention spans are short and people are often too busy to notice.

Help others understand your strengths and achievements by getting clear on what they are and what you uniquely bring to the the table.

Once you’re clear on this, it’ll be much easier for others to recognise the unique skills you bring to the organisation.

Finally? Embrace the discomfort, feel the fear and do it anyway for the sake of future leaders.

What Dr Katie Bouman has done is show us not only a groundbreaking scientific image, but an image of a scientist that is different than the one most of us grew up with.

What Dr Katie Bouman has done has made it easier for that little girl at home, excited about studying the wonders of the Universe, who can now say ‘people like me, do things like this’.

Read next: The life-saving reason we need more female doctors