Kemi Nekvapil wants us all to be a kinder to ourselves

Kemi Nekvapil wants us all to be a kinder to ourselves 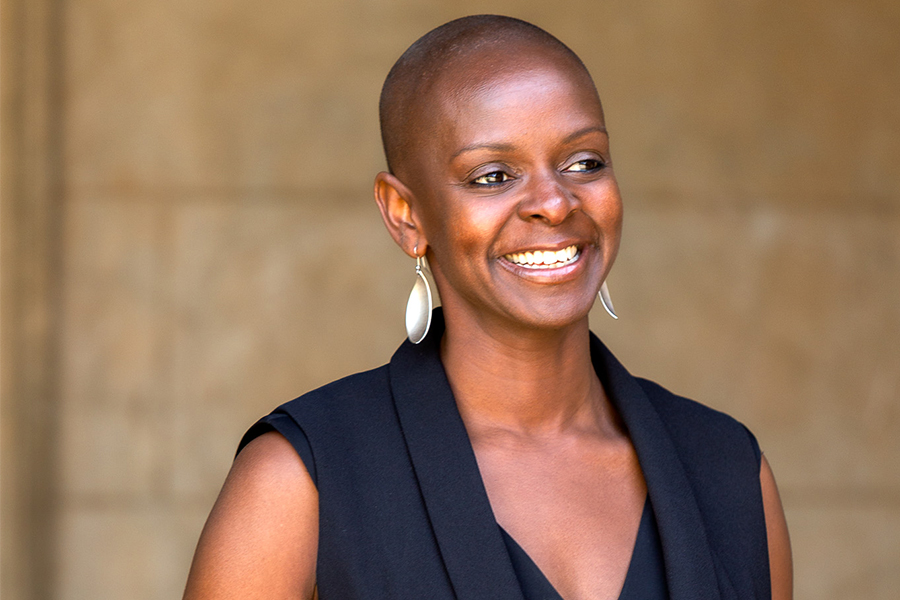 From two weeks old until adulthood, Business Chicks Premium member Kemi Nekvapil lived with multiple foster parents. She’s a British citizen with Nigerian heritage, and she now happily lives in Melbourne. She has been a baker and a leading actor, but these days she spends her days working as a raw-food advocate and a life coach.

This is her story…

What did you want to be when you grew up?

I didn’t want to be anything when I grew up. All I was focused on when I was little was survival. My Nigerian parents were very committed to my sisters and I having an English education, so they sent us to the UK. I had five sets of foster parents. My birth parents weren’t drug addicts or anything like that, they were very wealthy, upper-middle class Nigerians, and a lot of children from that background were fostered out to England and went into English education with the idea that we could all go back and become doctors and lawyers.

When I became a teenager, I realised I had a choice about how I wanted to live my life.

It’s why I’m a life coach now; because I was brought into the space of knowing that we do actually have a choice. We may not like the choices that we have, but we do get to choose.

So it was at 13 that I realised I love food, acting and fashion. My foster mum at the time was a career teacher. She said to me, ‘It would be great to have a trade behind you – then you can try fashion and acting.’ So I trained as a baker and was very successful. I won lots of awards. I love baking; I love playing with food. I grew up with my first proper parents eating food from the garden. I thought if acting doesn’t work or fashion doesn’t work out, I can fall back on the trays. People are always going to want to eat bread. Except that was 30 years ago, and now people don’t always want to eat bread!

After that, I went to drama school and landed an agent within my first week. I got a gig on a show called London Bridge, a kind of multicultural soap opera. From there I went and worked with the Royal Shakespeare Company and the national theatre.

I was working with one of the best and well-regarded theatre companies in the world, and I realised: this is really good fun but it’s not what I’m here to do.

It was very traumatic. I got to the point where I was going to auditions and I’d leave sobbing, coming out and thinking ‘What are you doing with your life?!’

I decided I wanted to teach yoga and be a chef. I heard about a guy who was opening a resort in Thailand for A-list celebrities. They needed a chef, so I put my hand up – I wanted to learn to cook Thai food. I was told, ‘I’m not going to pay you, but I’m going to give you free accommodation and as much food as you want.’ At the same time, my agent had just done an amazing deal with me and one of England’s major television companies, and I was going to be the first black actor to have produced the writing rights and directing rights on this particular show. I was at a complete crossroads. Everyone was telling me to do the TV thing. I went to Thailand.

Wow! What made you make that call?

Why did I go to Thailand and work for no pay for a man I didn’t know? You don’t know until you jump. I didn’t have anyone around me saying, ‘You’re famous, you have lots of money, so why not leave this job you don’t want?’

No one was around me telling me to follow my heart, it was just my intuition. I was very much on my own and it was truly a hard time for me. I knew I had to go. I didn’t know why I just knew I had to. Within three weeks I met my now-husband. Shortly after, I fell pregnant with my son, Benjamin. And then I moved to Australia.

Have you ever thought what your life would be like if you’d chosen the other path?

How did your business come about?

I discovered raw food for myself and realised how amazing it made me feel. I started to feel more beautiful, more grounded, clearer than I had ever felt – and yet I was told as I got older I was meant to get worse.

I started looking at how the media portrays women. I’ve always been a feminist, even if I haven’t always been conscious of it. I’ve been surrounded by incredible women all my life, who are so hung up on their weight and wrinkles. I just thought, ‘Oh, my god, this is so insidious, I want to do something about this.’

I was speaking for a three-day event, and the name just hit me: Raw Beauty Queen. It hit me to the point where it made me sick, it really scared me, because I thought if I do this, there’s no hiding. I can’t hide behind a window or behind food. This is me saying I have something to say, and everything that comes from that. It’s literally raw.

I thought, what if beauty is what we create, not what we’re told it should be?

I went to bed thinking, oh, I’ll wake up and will have forgotten all about this. And then I woke up and it was still there, and so I went for a very long run and thought I’d run it out and ditch the idea. I got back to my children, fell on the floor and sobbed, and sobbed and sobbed. I’d found my why. And so I bought the domain name straight away. I couldn’t run away from that.

When I started working with women and food, I realised it didn’t matter how much I said – this isn’t about dress sizes, this isn’t about weight, it’s about fuelling your body to do what you want to do with your life – people will still ask me how many calories are in cucumber.

I want to get women to open their eyes and realise that we don’t want to die with our epitaph reading ‘she made it to a size 6’.

Why do you think women find it so hard to be kind to ourselves?

Because it’s all around us not to. We’re told to be good and be quiet and not rock the boat and be amenable and be available and say yes. But with all of those things we can’t be kind to ourselves. If we never speak up about what we need or what we think, we just become smaller and smaller and smaller. And then with that comes resentment and disempowerment and anger and jealousy – not very nice emotions. 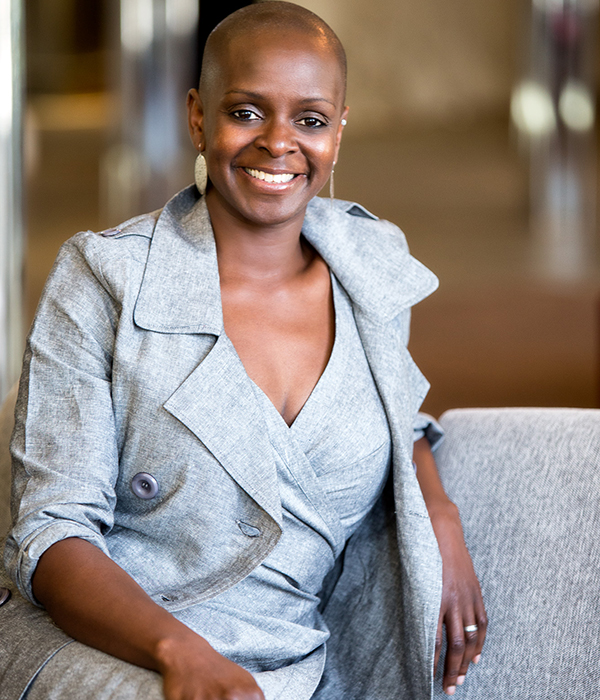 What do you say to women who say they have no time for themselves?

I’d say, ‘Have you found that in the past you’ve found times for things that you have been truly committed to?’ And everyone’s answer is always yes. So I say, ‘What are you really committed to now?’ And that’s where the coaching session leads to, ‘I’m not sure.’ I say, ‘How much are you committed to watching the TV?’ And they’ll say, “Yeah, I want to be committed to health and well-being but actually at home I’m watching Game of Thrones.’ There’s nothing wrong with that, but does it move you towards your health and well-being goals? Well no, it doesn’t.

How do you make sure you’ve got time for yourself?

I’ve been doing yoga and meditation for over 22 years. How much I do depends on what how life looks like. When my kids were young my yoga was in the shower every day for 10 minutes. That was my session: steam and hot water running over me, time on my own for 10 minutes – not pushing myself on the mat for two-and-a-half years like I did before I had kids.

My children Benjamin, 12, and Ella, 10, have grown up with a mother who has always said to them, ‘I’m meditating … you can come and sit with me, but I’m not going to talk to you.’ They just get it. Even now when they walk in and I’m meditating, they will close the doors and know I’ll be out soon and that’s it. They’ve grown up with me being kind to myself so they’ve learnt how to be kind to themselves.

What’s a day in the life of Kemi?

I am a creature of rhythm and habit and because I have to travel to speak, it’s important to me that I have a firm routine. Mondays I’m in the office. Tuesdays and Thursdays are for coaching days. Wednesdays are when I write and Fridays are my inspiration day. I wake up on Friday and do whatever I feel like. Sometimes that’s going to a gallery, sometimes it’s making a really nice dinner for that night or going to see a neighbour; it just depends. I feel like I can’t be a life coach for women if I can’t create a good life for myself.

Sometimes I just sit in my garden watching leaves blow around. I love to run, too – I did a 100k race last September. Running in nature, especially among trees, I just feel like I’ve died and gone to heaven.

I still work at home. When my business started to grow, I thought, ‘I have to move into an ‘office’ now! I need to hire staff! That’s what you should do when your business grows!’ And then I realised that I actually love working from home. I like looking at my apple trees. And I don’t necessarily need lots of staff. You have to do what feels right for you.

What have you learnt as a life coach?

I was speaking a few months ago to a lot of women, and I asked them: ‘Who here likes to help and support others?’ Every woman put her hand up. I then asked: ‘Who likes to be helped?’ And no one put her hand up. I was so shocked, I asked the question again and asked the women to look around the room. And then I asked why they didn’t want to be helped or supported. People were saying, well, I don’t want to be a burden, I don’t want to be weak. We want to help others but we don’t want help for ourselves. I meet a lot of women – all 100% doers, out there, willing to create their lives. But so many of them don’t know that asking for help is a fast-track to success.