From selling life insurance to selling out art shows. 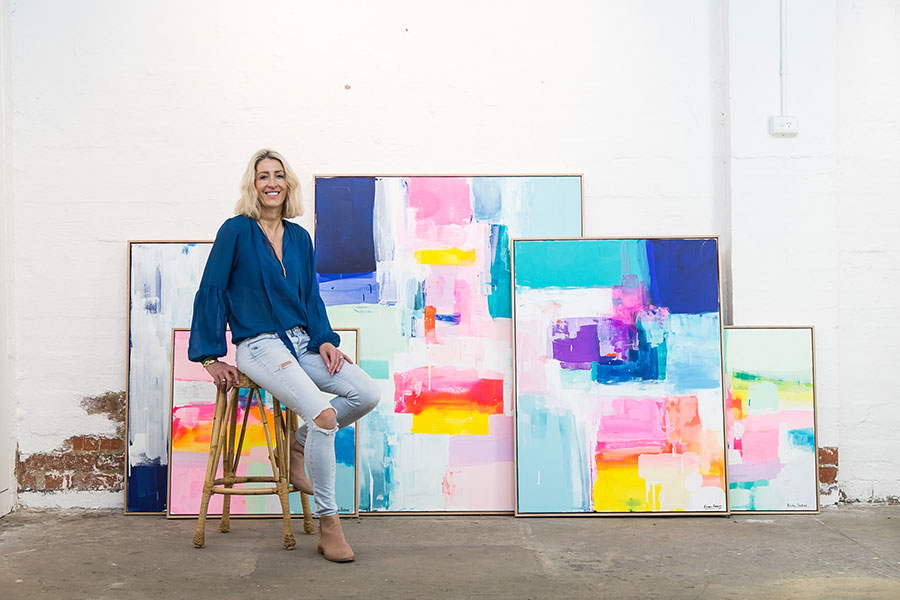 We are all guilty of looking at modern art and thinking, ‘even I could do that’… and that was all it took for Premium member and self-taught artist, Kristen Jackson. Kirsten will be exhibiting at 9 to Thrive in Brisbane this weekend – grab your tickets here.

I was 30 when I first started painting.

It all started when I went to the local community centre and did an art class. I loved it. Basically, I was self-taught for a few years and then got into a few galleries. I got knocked back so many times because I was so bad in the beginning, I was really not that good! There was this gallery in Melbourne, and the guy who owns it is lovely and I went in with my paintings and he was like, ‘No, no, no… I like one centimetre of this one million-centimetre painting; can you do it like that?’ So I kept going back to him, over two years with this painting and eventually, he goes, ‘Oh, my god, I love it!’ So he started selling my work. I’d gotten into galleries before that, but his gallery was kind of THE gallery to get into at the time.

Before that, I sold life insurance for a few years.

I had a young family; I had my daughter at twenty-seven and my son at thirty. Before kids I was in sales and marketing. Actually, I sold life insurance for a few years, so that probably helped me with painting. You learn from selling life insurance, you have to be able to sell. So when I started painting seriously, I just wanted to be able to go to the galleries and approach them to sell my work.

The first year I put my work in, nothing sold.

For two years I did a show called The Canterbury Art Show. The calibre of work they do is excellent, probably one of the best schools in Australia. The first year I put my work in, nothing sold and my husband went with me and we picked everything up. Then the next year we went, nothing sold and my husband comes up to me and says, ‘Sweetheart, maybe you should try something else?’ I was like, ‘No. I’m going to get this right!’ I don’t know, I think I’m very wilful. I don’t think I have a lot of ability with anything, I just keep trying until I get it right. 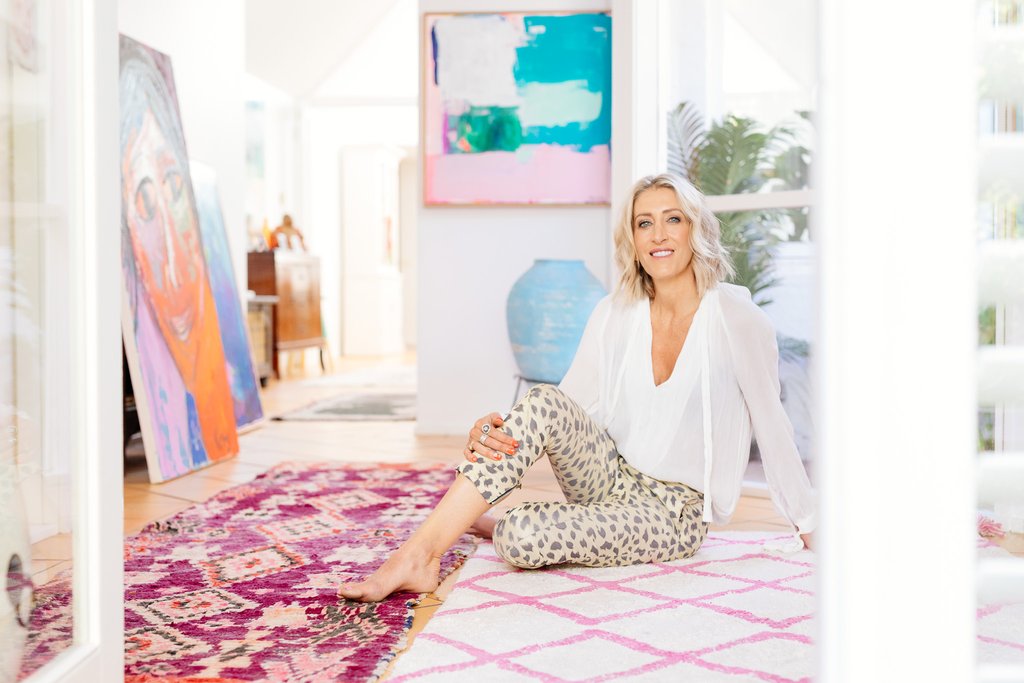 Eventually, somebody paid me and then it all just snowballed from there.

Now I’ve got over thirty pieces on a commission waitlist and last year I had shows in New York and Brussels. I was getting ready for other art shows in Sydney at the same time, which is really good because out of the thousand of artists that applied, I was shortlisted.

I knew I was always going to make money

I never had any fear about not making money, I was always determined to make money. That didn’t even enter my brain. I just knew. Also, at the time when I started, the money was secondary. The kids were little, and we weren’t desperate for money. I think if I had gone out and had to make it, I would have gone and gotten a job somewhere. I didn’t work when the kids were little, but painting for me was never about the money. I just knew the money would come.

I guess I found my own way, I’ve done so many commissions over the last ten years.

I have won some art awards but I started off at primary school exhibitions! Since then, I’ve had sellout shows in London, Hong Kong, Singapore, Brussels, Stockholm, and New York in the last five years. My work in London is crazy. I think they love the colour because it’s so cold over there, but all these European countries and Hong Kong have been incredible for me. 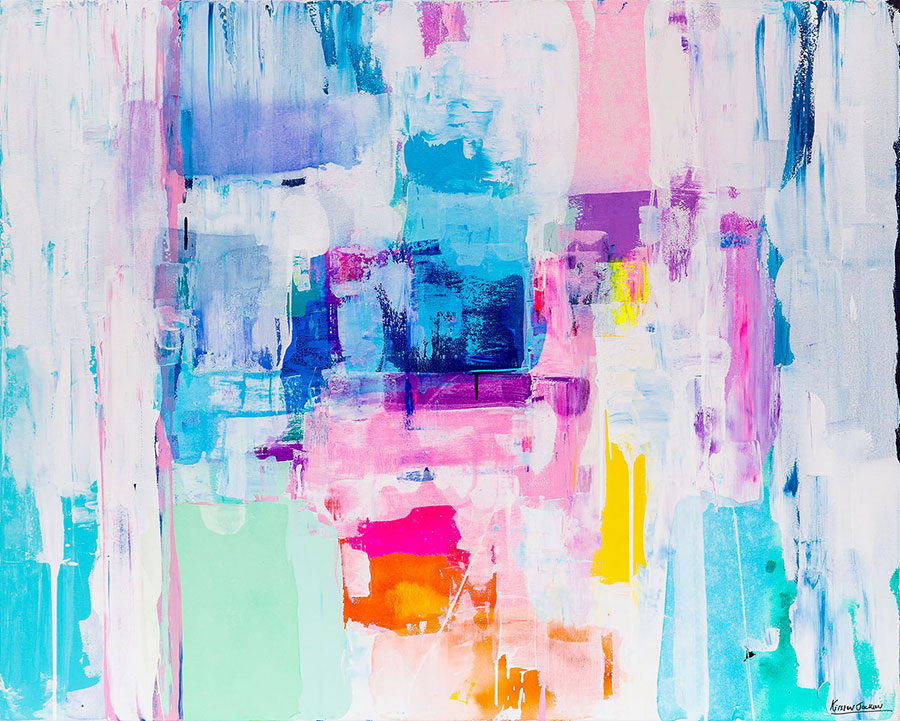 I normally work on five paintings at a time and they can take me anywhere from two weeks to three months to finish.

Sometimes they work straight away and then other times I have to keep working on it. How I know it’s ready, is I take a photo of it and then I have it in my studio or at home, and I live with it for a couple of weeks and make sure that I love it. Because sometimes when I think it’s finished, I’ll see things that aren’t quite right that I need to fix.

I don’t have any inspiration outside of myself

Inspiration doesn’t come from outside of me, it comes from inside, so I don’t need to go to the water or look at a flower, which I’ve now learned. I’m inspired by my life experiences, when I was three, my dad died and then my mum died when I was 14 and it was really, really awful, kind of hard to speak of, but I know that what I’m trying to do is bring happiness. It was such a terrible time for me, I just want to create colour and happiness for everybody including myself. The paintings are all about me bringing life and energy out to the world because I lost part of that.

I’ve got two paintings in my house (no three!) that I will never, ever sell

No matter what and I just … one of them is in cool summer colours, it’s available for print on my website, I think I’ve done two or three commissions just off that one painting.

I’ve got another painting here with our little doggie from a couple of years ago. He used to come to the studio with me all of the time and then when it was like half-way done, he passed. I couldn’t go in the studio for two weeks, so that was the first painting I finished after he passed away, so it’s his painting, so I can’t let it go. I love it too, it’s so beautiful.

And then I have a painting of my mum, I started the happy faces paintings because of her. I wanted her in the house when the kids were little so that she was always with us.

Because of Business Chicks: ‘I started the Rainbow Jane foundation’