‘I found my feet and can’t imagine doing anything else.’

‘I found my feet and can’t imagine doing anything else.’ 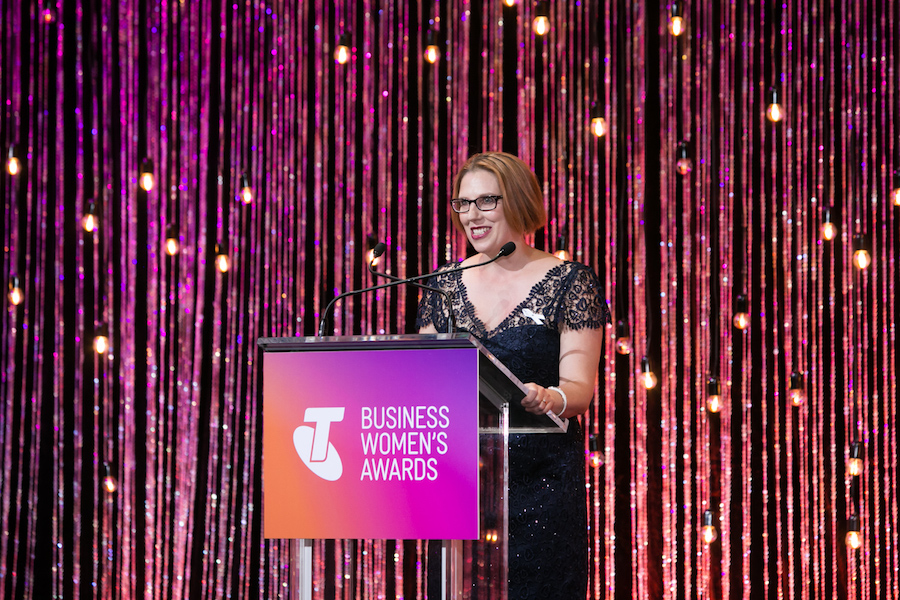 One in four children are reported to child protection in South Australia by age 10.

The issue of child abuse and neglect in Australia is so big that Professor Leah Bromfield, Co-Director of UniSA’s Australian Centre for Child Protection, says we need an army to tackle it. We chat with Leah about how compassion and business-thinking can solve social problems, the transformational impact that taking out a Telstra Business Women’s Award has had on her and her team, and the life lessons along the way.

In her late teens, Leah thought she wanted to be a counsellor but while undertaking her psychology degree she discovered her love for the research side of things. With research, “I could still build my mission and help people but now I can help the population instead of the individual.” She hadn’t known which focus area but a scholarship offer to do a PhD in child protection marked the beginning of a career-long commitment to shining light on a difficult and complex issue: child abuse and neglect. “That was it for me. There is just so much to do with the evidence we have. I found my feet and can’t imagine doing anything else.”

In the last half decade, Australia has had some hopeful shifts in social issues: the rise and rise of sustainable business, legalising same-sex marriage, Rosie Batty raising the nation’s consciousness on domestic violence, and Tracey Spicer’s NOW in response to #TimesUp. While we can celebrate small and big wins, Leah says child abuse and neglect is still catching up to that level of recognition. “Conversations around domestic violence does touch upon one form of child abuse and neglect but there are other forms of physical abuse, psychological abuse and sexual abuse that children experience.”

And to raise awareness we must, with child abuse and neglect being one of the top social problems in Australia. “One in four children are reported to child protection in South Australia by age 10. In terms of the burden of disease, children who experience abuse and neglect perform consistently worse on the Australian Early Development Census and NAPLAN literacy and numeracy scores than those who aren’t involved in child protection. And the burden of disease for childhood abuse and neglect amongst adult survivors are equivalent to breast and prostate cancer.”

Leah and her award-winning team’s world-class initiatives to create positive changes have begun with a practice that’s simple yet overlooked: listening to children. Really listening.

“Young people are so often the wisest voice in the room when we give them the chance to speak.”

“There’s often a lot of fear in talking to kids because we think we’d traumatise them more. As a result, we tend to not talk to them in research or making policy decisions out of wanting to protect them, but we’ve been getting that really wrong because our most vulnerable kids are the most silenced. We found that when adults hear stuff children are saying, they can be all about the risks reiterating ‘I’m going to make this report’ when all children needed was somebody to be there and listen to them about this whole thing that has happened.”

“As adults, we’ve been grappling with identifying ‘safe’ and ‘unsafe.’ Kids though, when asked, had clear and consistent parameters for us such as being able to describe a ‘creepy’ adult who ‘stands too close’ or ‘share things about their personal lives that they shouldn’t’. Asking questions unlocked this whole new gateway about how we, as an organisation, can make a safer world for kids.”

Often dealing with the worst things that can happen to children no doubt fuels anger for Leah. It’s an emotion she describes as being useful as a constructive force for pushing boundaries, working nationally and internationally with governments and non-government agencies to establish child welfare reforms. Her hard work led her to taking out the Public Sector and Academia Award in the 2017 Telstra Business Women’s Awards, a career milestone she remains giddy about.

“I had people around me wondering, ‘Why would a researcher go into a business award? What’s research got to do with business?’ Well, applying business thinking to a social problem is actually what’s necessary to start transforming some of those awful statistics around.” 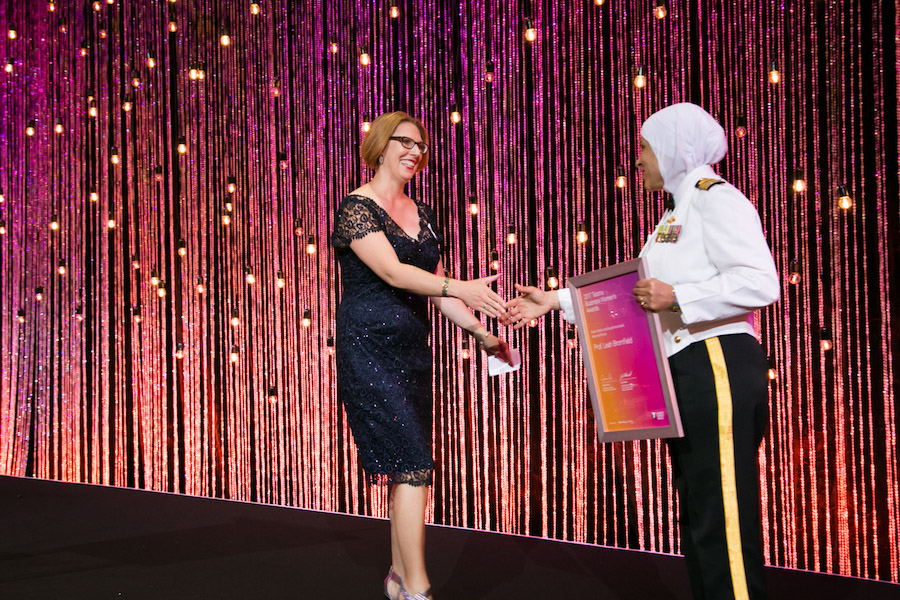 “In the last 18 months, we’ve done a lot of work for the state of South Australia to – in a business sense – look at some of our client modelling. What’s creating business or repeat business? What was our potential for prevention? Where are we missing some windows of opportunity? What’s the state investing in? Was it truly making the best investments to have the greatest success? That’s business speak. Reengineering our entire business system for success.”

One of her proudest moments was handing over the book of messages from more than 1,000 survivors to the Royal Commission to go into the National Library of Australia, a tribute to the survivors’ courage in telling their stories with hope to create a safer future for children. It was part of her most memorable work to date, her team’s massive research effort for the Royal Commission into Institutional Responses to Child Sexual Abuse, which issued its final report in December 2017. “This work was a privilege and a burden at the same time. We needed to get it right for the survivors, and we did the best we could do with it. I’m still so proud about it.”

In Leah’s professional world, “statistically, the more risks you’ve got, the poorer your outcomes” but having gone through suddenly losing vision in her only sighted eye changed her attitude towards resilience forever.

“It took me a lot of soul searching and transforming the way I think about risks and adversity. A friend told me ‘you’re not less because you can’t see anymore, you’re more because you keep doing despite not seeing’. The getting up and the going about and just contributing the best you can – and doing that with adversity – makes you more, not worse.”

Leah’s since then regained a small portion of her vision. She, too, is a survivor and a fighter.

It all makes sense then that Telstra’s Group Executive Media and Chief Marketing Officer, Joe Pollard, recognised Leah’s ability to not only change the game in the prevention of child abuse with methods redefining the way universities approach research but to also rise above adversity.

Leah jokes that she could complain all day about how long it took her to answer all the entry criteria about herself but she “wouldn’t change a single thing about it” nodding to the thought that many women don’t like to celebrate themselves. “As women, we’re a little less inclined to notice what we do well. The process forced me into gaining insights from wrapping up everything I was doing.” There was a “fabulous side effect” to winning the award too – the level of authority and confidence it’s given her to help her achieve even more.

Now officially part of Telstra’s winning Alumni, Leah stresses the need for access to women’s support networks. “As wonderful as my male colleagues can be, walking in the shoes of a woman and becoming a female leader, there are experiences that are common to us as women, and there are challenges common to us as women, and that peer network is essential to working out the most constructive ways of dealing and coping with our journeys.”

However, Leah notes the Telstra Business Women’s Awards isn’t just a ‘women’s’ award. “Telstra has a high standard for selecting winners on the pure basis of excellence, which has made it so much more meaningful to be a winner.” Winners come from all backgrounds with incredibly different businesses, but there is one common trait amongst the female leaders: “Generosity,” Leah says. “It’s the care each woman has for teams, those who think how best to serve their team and the community.”

The Telstra Business Women’s Awards exists to recognise and celebrate women who are redefining the way we do business and creating new benchmarks for success. Undoing traditional business practices, championing inclusion and innovation, and using their own unique approach to inspire others to do the same. If you know a woman who’s thriving by undoing business, nominate them now for the 2019 Telstra Business Women’s Awards here.

How to write an awards entry that stands out

Andrea Mason asks: What if we replaced the word ‘power’ with ‘authority’?

Kemi Nekvapil wants us all to be kinder to ourselves