5 top takeaways from our Make Your Move event series

5 top takeaways from our Make Your Move event series 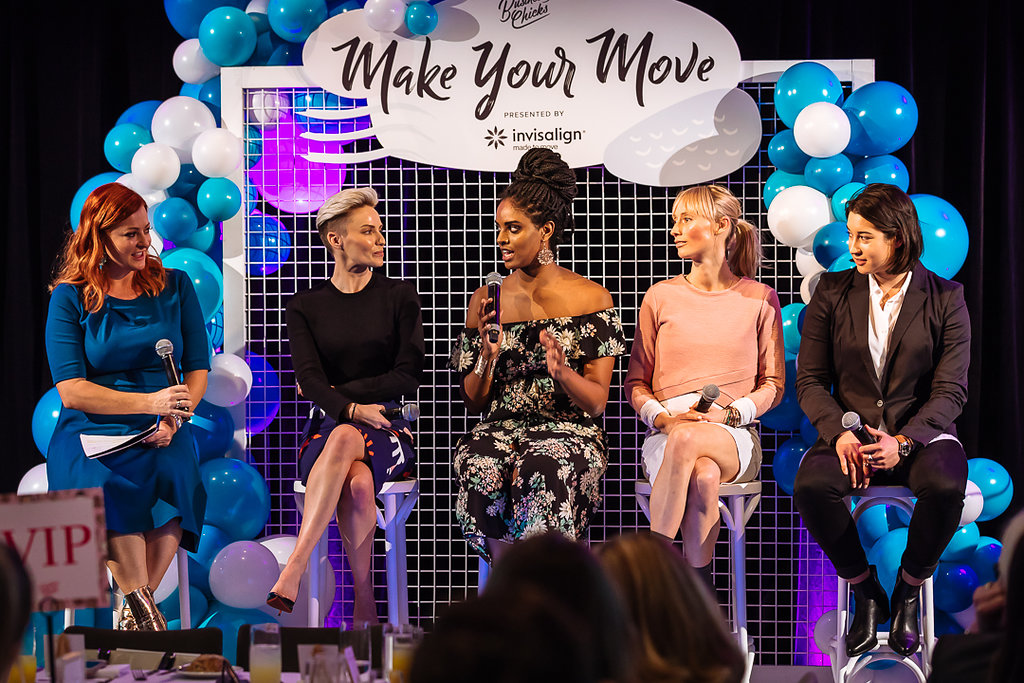 Our Make Your Move event in partnership with Invisalign® last Thursday deep dived into imposter syndrome, passion, purpose, and the confidence gap.

We were joined by Taryn Williams, entrepreneur and founder of the Right Fit, Zufi Emerson, actor and ambassador for Adopt Change, Kate Kendall, co-founder and director of yoga at Flow Athletic, and champion snowboarder Belle Brockhoff.

Along with the hilarious Shelly Horton as host, our panellists spoke about the most significant moves they’ve made in their lives and careers. For Zufi it was “making acting a career path rather than just something I did for fun,” and for Kate, it was leaving her “safe” career in advertising to pursue her passion for yoga.

There was one stand out moment during the event when Kate Kendall was talking about how she gained the confidence to turn yoga into much more than a hobby. Everyone leaned in a little closer to hear Kate speak, and we all made a mental note to reach out to someone we know and pass on her message.

“If you ever believe in someone, tell them.”

“I started practicing yoga and about two years in, my yoga instructor pulled me aside and said ‘I think you’d make a great teacher,’ and that taught me if you ever believe in someone, tell them because that changed my life forever.”

Belle Brockhoff is one of Australia’s most successful snowboarders; after finishing 11th at the recent Winter Olympics, Belle famously thanked her competitors and urged them to train harder, because that, in turn, makes her be a better athlete. If you joined us at the event you would’ve heard first-hand just how hard Belle pushes herself (there were visceral descriptions of knee injuries, and it was a good thing we hadn’t eaten lunch at that point!). We were all in awe of her grit and determination, but what struck us was the profound thing she said about life after elite sport that can be applied to all of our lives right now.

“Don’t let your goals become your identity; you have to know who you are.”

You only have to look at the sporting landscape in Australia over the last few years to see examples of what happens when our elite sporting heroes attach too much of what they do to who they are, and the fallout from that.

Zufi also echoed the importance of ‘knowing who you are’ when she was talking about backing yourself. “A lot of the time we’re waiting for permission from someone else, but you have to trust yourself, your opinion is valid.”

As women, we often put off the moves we want to make, whether that’s starting a business or making more time for ourselves, but as Taryn put it, “There is never the right, perfect moment.”

“For me, it’s been an amazing journey and almost 11 years of a tough slog with twists and turns along the way that I couldn’t have predicted, but if you are stubborn and persist, you are going to succeed,” Taryn said.

We’re all about helping women in our community the confidence to make the moves they want to make, so if you wish to take a small leap or start over completely we urge you to jump in and just ‘wing it’ – or at the very least today, tell a woman in your circle that you believe in her – it might just change her life.

This event series was proudly presented by Invisalign® Australia.