Mark Manson on how your insecurity is bought and sold

Mark Manson on how your insecurity is bought and sold

In our culture today, marketing often is the message. 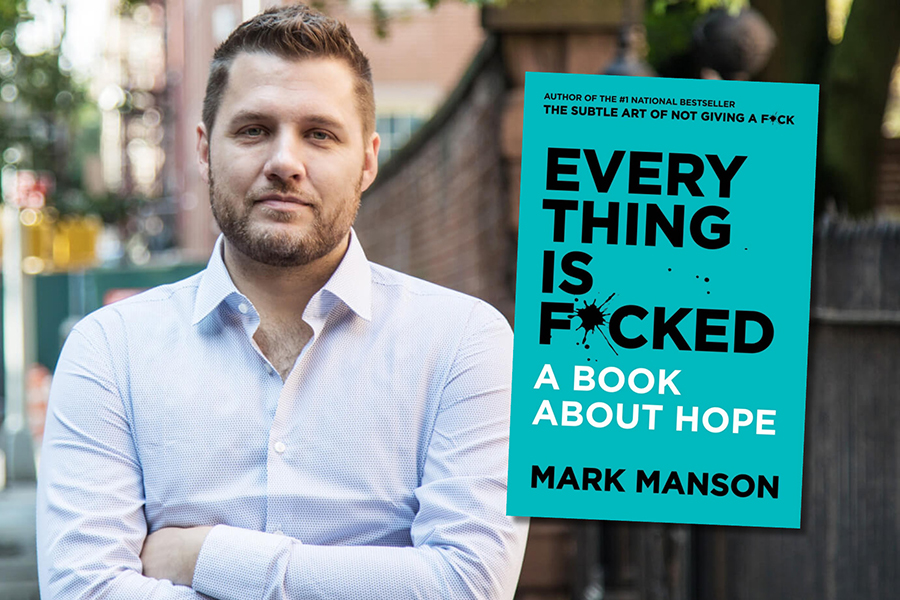 The following is an excerpt from Mark Manson’s new book, Everthing is F*cked: A Book about Hope. Mark will be joining the Business Chicks stage in July, head to our events page to grab your ticket before they’re all sold out.

In the 1920s, women didn’t smoke. Or if they did, they were severely judged for it. It was taboo.

Like graduating from college or getting elected to Congress, people believed women should leave the smoking to men. Honey, you might hurt yourself. Or burn your beautiful hair.

This posed a problem for the tobacco industry. Here you had 50% of the population not smoking their cigarettes for no other reason than it was unfashionable or seen as impolite. This wouldn’t do. As George Washington Hill, president of the American Tobacco Company, said at the time, “It’s a gold mine right in our front yard.” The industry tried multiple times to market cigarettes to women but nothing ever seemed to work. The cultural prejudice against it was simply too ingrained, too deep.

Then, in 1928, the American Tobacco Company hired Edward Bernays, a young hotshot marketer with wild ideas and even wilder marketing campaigns.

Bernays’ marketing tactics at the time were unlike anybody else’s in the industry. Back in the early 20th century, marketing was seen simply as a means of communicating the tangible, real benefits of a product in the simplest and most concise form possible. It was believed at the time that people bought based on facts and information. If someone wanted to buy cheese, then you must communicate to them the facts of why your cheese was superior (“Freshest french goat milk, cured 12 days, shipped refrigerated!”). People were seen as rational actors making rational purchasing decisions for themselves.

But Bernays was more unconventional. Bernays didn’t believe that people made rational decisions most of the time. In fact, he believed that people were fundamentally irrational and so you had to appeal to them on an emotional and unconscious level.

Whereas the tobacco industry had been focused on convincing individual women to buy and smoke cigarettes, Bernays saw it as an emotional and cultural issue. If Bernays wanted women to smoke, then he had to shift that balance and turn smoking into a positive emotional experience for women by reshaping the cultural perceptions of smoking.

To accomplish this, Bernays hired a group of women and got them into the Easter Sunday Parade in New York City. Today, big holiday parades are cheesy things you let drone on the television while you fall asleep on the couch. But back in those days, parades were big social events, kind of like the Super Bowl or something.

Bernays planned it so that these women in the parade, at the appropriate moment, would all stop and light up cigarettes at the same time. Then, Bernays hired photographers to take flattering photos of the women which he then passed out to all of the major national newspapers. Bernays then told the reporters that these ladies were not just lighting cigarettes, but they were lighting “torches of freedom,” demonstrating their ability to assert their own independence and be their own woman.

It was all fake, of course. But Bernays staged it as a political protest because he knew this would trigger the appropriate emotions in women all across the country. Feminists had just won women the right to vote a decade earlier. Women were now working outside the home and becoming more integral to the country’s economic life. They were asserting themselves by cutting their hair short and wearing racier clothes. Women at the time saw themselves as the first generation that could behave independently of a man. And many of them felt very strongly about this. If Bernays could just hitch his “smoking = freedom” message onto the women’s liberation movement, well, tobacco sales would double and he’d be a rich man.

And it worked. Women started smoking and got to enjoy lung cancer just as much as their husbands did.

Meanwhile, Bernays went on to pull off these kinds of cultural coups regularly throughout the 1920s, 30s, and 40s. He completely revolutionised the marketing industry and invented the field of public relations in the process. Paying celebrities to use your product? That was Bernays’ idea. Creating fake news articles that are actually subtle advertisements for a product? Also his idea. Staging controversial public events as a means to draw attention and notoriety for one of his clients? His idea as well. Pretty much every form of marketing or publicity we’re all subjected to today began with Bernays.

But here’s something else surprising about Bernays: he was Sigmund Freud’s nephew.

Freud’s theories were some of the first to argue that most human decision making was primarily unconscious and irrational. Freud was the one who realised that people’s insecurities drove them to excess and overcompensation. Freud was also the one who understood that people are, at heart, animals and are easily manipulated, especially in groups.

Bernays just applied these ideas to selling products and he got rich in the process.

Through Freud, Bernays understood something nobody else in business ever understood before him: that if you can tap into people’s insecurities — if you can needle at their deepest feelings of inadequacy — then they will buy just about any damn thing you tell them to.

This form of marketing became the blueprint of all future advertising. Trucks are marketed to men as ways to assert strength and reliability. Makeup is marketed to women as a way to be more loved and garner more attention. Beer is marketed as a way to have fun and be the centre of attention at the party. I mean, my god, Burger King used to market hamburgers with, “Have it your way” — that doesn’t even make sense.

After all, how else does a women’s magazine that shows 150 pages of airbrushed pictures of women in the 0.01th percentile of the population in terms of beauty make money other than turning around and selling beauty products next to those exact same airbrushed women? Or beer commercials that show raucous parties with friends, girls, sports cars, Vegas, friends, more girls, more beer, girls, girls, girls, parties, dancing, cars, friends, girls! — Drink Budweiser.

This is all Marketing 101 today. When I first studied marketing when I started my first business, I was told to find people’s “pain points” and then subtly make them feel worse. Then turn around and tell them my product will make them feel better. In my case, I was selling dating advice, so the idea was to tell people that they will be lonely forever, that no one will ever like them or love them, that something must be wrong with them — oh! And here, buy my book!

I didn’t do that, of course. It made me feel icky. And it took me years to really understand why.

In our culture today, marketing often is the message. The vast majority of information that we’re exposed to is some form of marketing. And so if the marketing is always trying to make you feel like shit to get you to buy something, then we’re essentially existing in a culture designed to make us feel like shit and we’ll always want to overcompensate in some way. One thing I’ve noticed over the years is that of the thousands of people who have emailed me for advice in one form or another, a large percentage of them didn’t actually seem to have any identifiable problem. Rather, they clung to bizarre and unrealistic standards for themselves. Like the college kid who goes to college expecting to go to insano pool parties with bikini-clad women on a daily basis and is then disappointed when he feels socially awkward because he has to go to class and study hard subjects and make new friends and constantly be unsure of himself because he’s never lived on his own before. The latter experience is totally normal, yet he somehow shipped himself off to university with expectations of Animal House every weekend.

This sort of thing is happening all over. I know for me, my conception of romance and a relationship when I was young was some cross between a random episode of Friends and a Hugh Grant movie. Needless to say, I spent many years feeling frustrated and as though something must be inherently wrong with me.

Bernays was aware of all of this, by the way. But Bernays’ political views were like a diet version of fascism — he believed that it was both inevitable and in everybody’s best interests that the weak be exploited by the strong through media and propaganda. He called it “the invisible government” and generally thought the masses were stupid and deserving of whatever smart people convinced them to do.

Our society has evolved to an interesting point in history. Capitalism, in theory, works by allotting resources to fulfil everyone’s needs and demands in the most efficient way possible.

But perhaps capitalism is only the most efficient means of fulfilling a population’s physical needs — needs for food, shelter, clothing, etc. Because in a capitalist system, it also becomes economical to feed into everyone’s insecurities, their vices and vulnerabilities, to promote their worst fears and constantly remind them of their shortcomings and failures. It becomes profitable to set new and unrealistic standards, to generate a culture of comparison and inferiority. Because people who constantly feel inferior make the best customers.

This isn’t an attack on capitalism. It’s not even an attack on marketing. I don’t think there’s some big overarching conspiracy to keep the “sheeple” in line. I think the system simply creates certain incentives that shape media, and then the media go on to shape a callous and superficial culture based on trying to always live up to something.

Overall our system has done pretty damn well, and still does for the most part. I like to think of it as the “least worst” solution to organising human civilisation. Unbridled capitalism simply brings with it certain cultural baggage that we must learn to be aware of and adapt to. Oftentimes, the marketing in our economy pushes insecurity onto us that is not helpful and that intentionally triggers inadequacies or addictions within ourselves to make more profit.

Some may argue that this sort of stuff should be regulated and controlled by government. Maybe that can help a little bit. But it doesn’t strike me as a good long-term solution.

The only real long-term solution is for people to develop enough self-awareness to understand when mass media is prodding at their weaknesses and vulnerabilities and to make conscious decisions in the face of those fears. The success of our free markets has burdened us with the responsibility of exercising our freedom to choose. And that responsibility is far heavier than we often realise.

Mark will be joining the Business Chicks stage in July, head to our events page to grab your ticket before they’re all sold out.