“In 20 years time they’ll show footage of the first NRLW game and we’re going to be a part of that.” 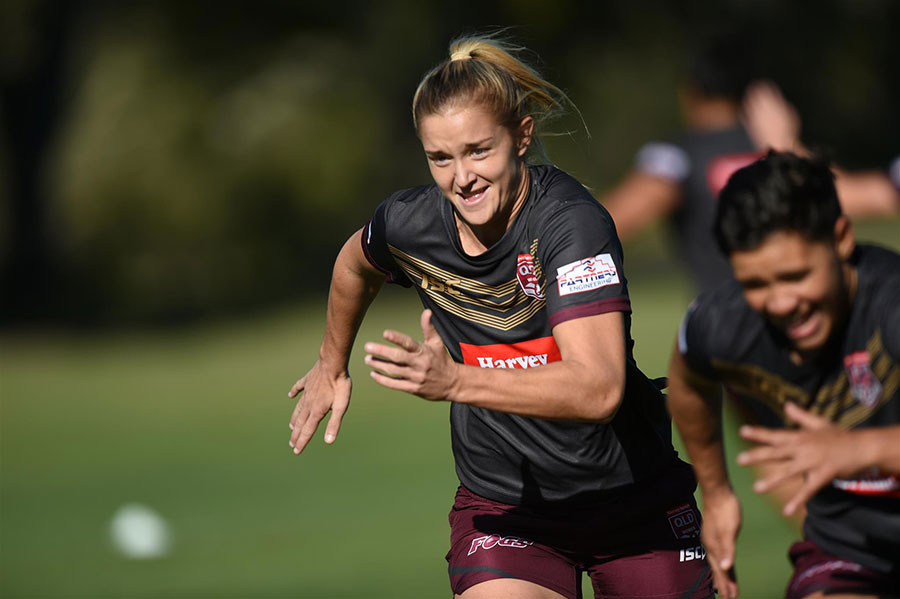 We’ve partnered with the NRL to profile three of Australia’s first female Premiership rugby league players. We all know the adage, ‘You can’t be what you can’t see,’ and these are the history-making women who are showing young girls that they can aspire to play sport full-time, whether it’s NRL, cricket or AFL.

First up, RAAF Firefighter and one of Australia’s first female Premiership rugby league players, Meg Ward. When we speak to Meg, she’s at a local school girls’ soccer match. She doesn’t know any of the girls in the team, but it’s her old coach’s team and she just loves supporting girls in sport. That’s the kind of woman she is.

Growing up I never thought about playing professional sport.

I wanted to be a soccer player – I used to train every day and was playing in some top level teams. I went away with the Aussie School Girls for soccer in 2012, came back from that and a friend hit me up to play Rugby Sevens. I had a crack at that and loved it.

I moved over to rugby union and when I moved to the Northern Territory with work and one of the guys at work said there were rugby trials with the NT team. I was picked up by Brad Donald and the CACS (Combined Affiliated States Championships) tournament.

That tournament I was picked as Player of the Tournament and was told I was heading into the Jillaroos training camp. That’s when it became very surreal for me, very quickly – it was an overnight thing. I had played three games of rugby league before that tournament and by my eighth game I was playing for Australia.

It’s tough, but we do it because we love it.

I’m very fortunate that I can take the time off work (Meg works with the Royal Australian Air Force), but a lot of girls need to keep working because they have families and bills they need to pay, and it definitely makes it a lot harder.

They’re not getting the pay they need to take the time off. It’s in the stage where they’re expecting professional requirements of the girls but the pay just isn’t there yet. But, it’ll get there. It’s definitely difficult, but everybody loves it so much that you make it work.

I was chatting to one of the Broncos’ girls, Mariah, and she was saying she wakes up at 4:00am just to be at work by 5:00am. She works a full day and then comes to training at 3:00pm until 7:30pm. It’s a massive day for the girls, but when you love something so much you don’t think about the time you need to put into it, or the money – you just enjoy it. 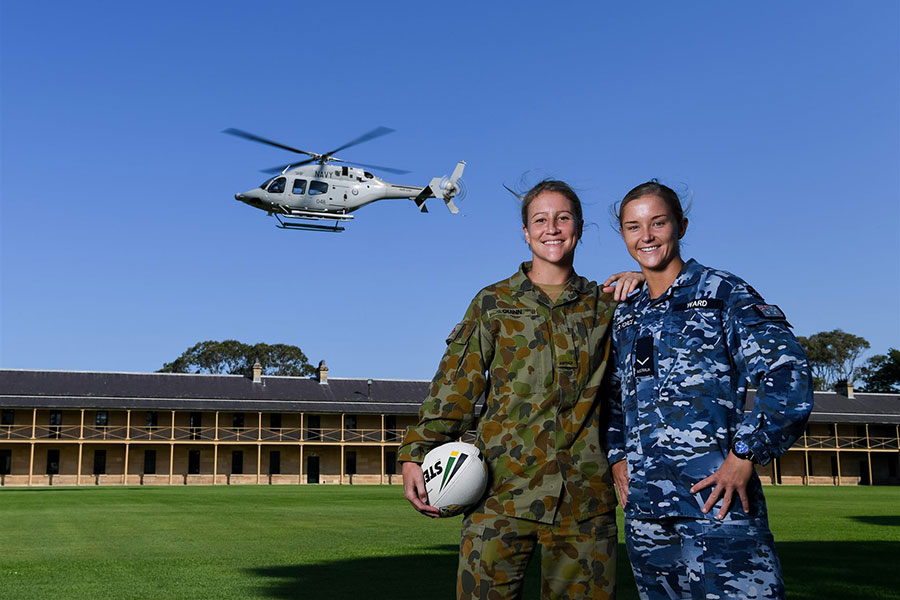 The RAAF have been so supportive of my career.

They have been so amazing with my rugby league career. It all happened really quickly. All the guys at work are all happy to put in extra hours when I need to go to training or go to a tournament. I am very lucky to have all my support.

My dad, still to this day, is my biggest mentor.

My whole life, in every sport I have played, my dad has taken me down to the local footy field or cricket pitch.

Since I decided to take up footy, he sits me down in front of the TV and points out different players doing different things – why they do it and how they do it. He’ll pass the ball with me for an hour and take shots at goal. He’s been amazing through my whole career and in all sports.

The spirit of the Broncos has been awesome.

One thing they really test you in conditioning isn’t your fitness but your mental toughness. It’s not always about making your times or distance, but when you’re exhausted, it’s about not stopping and to keep going.

What I’ve found with this team is the girls really push each other. If you’re next to each other, and you drop behind, they won’t run ahead. They’ll drop back and push you. That’s only one week together – and we’re really excited. 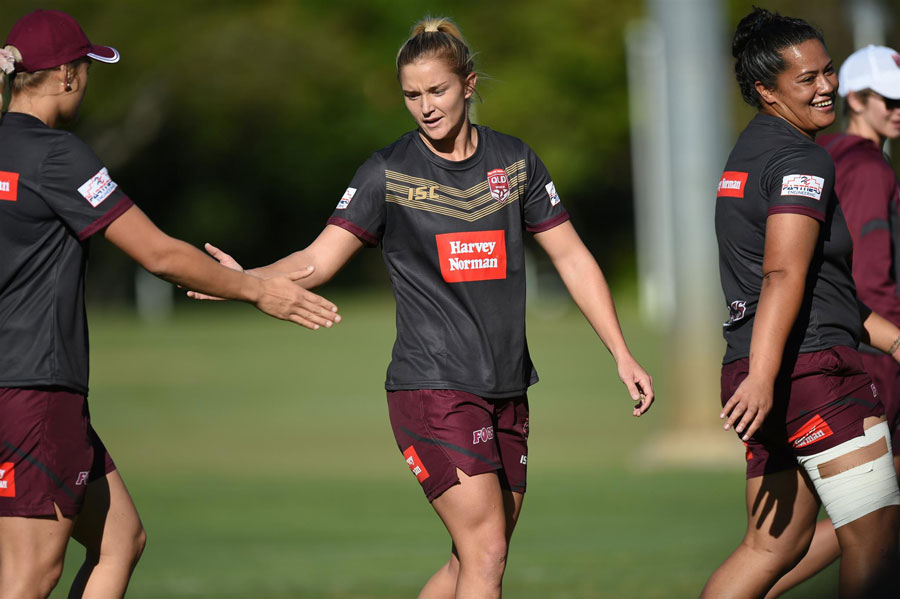 This is only the beginning for women’s sport.

Hopefully, one day we can have a full NRL competition (there are four teams in the Premiership competition: St George Illawarra Dragons, Brisbane Broncos, New Zealand Warriors, and the Sydney Roosters) and girls can aspire to play NRL full time. How amazing would that be?

Karina Brown (NRLW player) was talking to me about a kids clinic she went along to recently. When she was there, one of the boys came up to her and said, “I want to be a Jillaroo, just like you, one day.”

All of us when we were younger were saying, “I want to be Billy Slater or Johnathan Thurston,” because we didn’t really have anyone else to look up to. But now our names are getting out there, young girls and boys can look up to us and want to be like us. That’s really special.

We always look back at what the women who used to play had – they had to take out loans or sell their cars to represent Australia. They were never paid, they never expected to be paid – they did it for the love of it.

We really stand by that we have to to appreciate what we’re getting now and all we can do is continue to enjoy the game, grow the game, and definitely, one day, play the game full-time.

I am most excited to put on that Broncos jersey.

I can’t wait. It’s the team I grew up following, and just being able to put that jersey on and be fortunate enough to create history with my Broncos sisters.

It’s amazing to be part of that and we’re all creating history. Hopefully in 20 years time they’ll show footage of the first NRLW game and we’re going to be a part of that. It’s the same game as the men’s competition, but played our way.

I don’t think some people realise how big this is not just for women’s sport, but the game. We’re building it for girls so they can aspire to play sport full-time, whether it’s NRL, cricket, or AFL.

The Grand Final for the NRL Holden Women’s Premiership will be played on the same day as the NRL Telstra Premiership Grand Final – September 30th at ANZ Stadium. Tickets are on sale for this now at nrl.com/tickets

Follow the journey of the NRLW on social @wrugbyleague and use #NRLW and #OurWay to join the conversation.