We need to talk about the mental load

We need to talk about the mental load 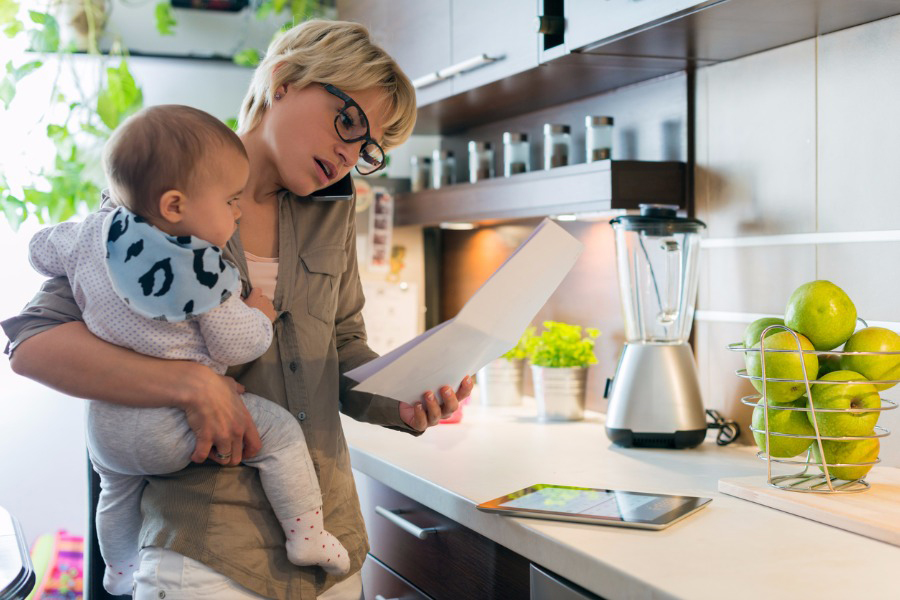 Exhausted? This could be why.

It’s a scenario that plays out in homes across the world every day. Picture this: it’s 7:30 am, and you’re simultaneously prepping school lunches, hurrying along toddlers eating Weetbix at a glacial pace, and pulling meat out of the freezer for tonight’s dinner. Meanwhile, a mental list of household tasks is running through your mind – ‘We need to buy milk,’ ‘I have to remember to book soccer camp for the kids in the school holidays,’ ‘Did that electricity bill get paid?’

It’s 2017, so chances are you’ve reached some equality on the home front. But even though you may have divided household chores evenly with your partner; you cook, he/she cleans, you do the washing, he/she takes the bins out, it’s the invisible work that is so much more than the division of labour which is exhausting women. And that workload increases dramatically when kids come along.

A brilliant comic by a French artist has gone viral for nailing the burden or the ‘mental load’ many women, particularly mothers, feel about being the default person solely responsible for managing household duties.

“The mental load means always having to remember,” a line from the comic reads. “Remember that you have to add cotton buds to the shopping list. Remember that today’s the deadline to order your vegetable delivery for the week. Remember that we should have paid the caretaker for last month’s work by now.”

Australian women do more unpaid domestic work (on average five to 14 hours per week) than men (less than five hours a week). According to the Census, single males and females spend a relatively equal amount of time doing housework, but when a woman moves in with her male partner, she takes on more housework, while the man does less – even when that woman works full-time.

There’s an argument that this time spent doing domestic chores has a far-reaching economic impact on women.

Dr. Leah Ruppanner, a senior lecturer in sociology, wrote on The Conversation about the trades both women and men make on their time, particularly when women drop out of the workforce to look after children.

“Women consistently trade time in employment for greater time in domestic work even when their resources are on par with men,” Ruppanner writes. “The lessons from these relatively small daily housework numbers — 43 to 120 minutes — are major, showing deep and persistent mechanisms of inequality.”

“The challenge is not housework alone but the way in which housework is embedded within broader care responsibilities. Women are expected to stay home with young children and, while they are home, they might as well put on a load of washing.”

The fallout from this is, the less women spend in employment, the fewer career opportunities they have to build wealth, and the less super they retire with. According to research, one in three Australian women retire with nothing in their superannuation.

So what can we do about it?

Since much of the mental load is invisible, let your partner in on all the stuff you’re doing that they may not even be aware of. Yes, we’re conditioned in society to be the caretakers, but by having a conversation (and probably several ongoing heated discussions) about dividing not only the chores, but entire tasks to share the load is one way to reduce yours. For example, one parent is responsible for making school lunches and paying excursion fees, the other commits to paying bills and ordering the groceries. Then combine forces on bigger tasks like prepping meals on a Sunday night to make rushed weeknights easier on everyone, and to reduce the daily, ‘what’s for dinner?’ mental load. And get older kids involved with dinner tasks like cutting veggies, clearing the table or packing the dishwasher. Research says that chores help children feel more confident, and have a sense of belonging when they are contributing rather than passive members of the family household. (You’ll all have more time to spend together too.)

Ask yourself, who’s actually responsible for this?

One of the reasons why women soldier on carrying the burden of the mental load is that because if we don’t, nothing will get done. The kids will go to school without lunch, no one in the household will have clean undies to wear to work, or the electricity will get cut off because the bill didn’t get paid. The fallout is often worse than the original burden. Here’s where the members of the household need to take more responsibility (when kids are old enough to do so) for their own needs. School lunches? The kids can pack their own. Husband’s work shirts need ironing? Yep, not your problem.

Step back, not up.

Justine Cullen, editor-in-chief of ELLE magazine, had some excellent advice on the Juggle Is Real panel at this year’s 9 to Thrive event. Rather than adhering to idea that men are typically hopeless at basic domestic duties or ‘babysitters’ of their own children, we need to give them more opportunities to step up. And to be involved early on in the first few days, weeks and months of parenthood when to be honest, neither parent really knows what they’re doing.

“We need give father’s more credit,” Justine told the audience. “I have friends who leave 20-page documents for their partners on how to look after their own kids when they go away.”

It doesn’t sound like an ideal solution, but dropping your high expectations can fall in your favour. In a recent episode of the Ladies, We Need to Talk podcast, Yumi Stynes and Tracy Spicer talk about pledging to care less to reduce their mental load. For Yumi, this means pledging to not care if the sheets aren’t folded correctly and for Tracy, it means pledging to not cook her children a three-course meal every night.

Take a listen to the podcast here.

Tell us how do you deal with the ‘mental load’ in your household?