‘Once you realise everyone is winging it, it will set you free’

‘Once you realise everyone is winging it, it will set you free’

Emma Isaacs on the Magic of Winging It …

THE MAGIC OF WINGING IT

“The older you get, the more you realise that no one has a f***ing clue what they’re doing. Everyone’s just winging it.” – UNKNOWN

At some level, it’s comforting to think that others have it all worked out and that successful people have a foolproof plan ready to whip out when things go wrong.

Here’s the thing though: no one really knows what they’re doing.

No matter how much they’re giving off the illusion of control and calm, at some level they’re making it up as they go along, just like the rest of us.

Steve Jobs had never created a phone until Apple developed the iPhone. Dame Quentin Bryce had never been Governor-General before she started, and Arianna Huffington had never run a news organisation before she pressed go on The Huffington Post.

A Prime Minister has never before been a Prime Minister (okay okay, with some notable exceptions), and there’s no greater example of making it up on the fly than first-time mums: you perform the ultimate act of ‘having a go’ by pushing something the size of a watermelon out of an opening the size of a lemon, and are then handed a little being you are responsible for and have no clue what to do with.

The realisation that everyone is winging it is shocking at first, but once you’ve wrapped your head around the concept, it becomes deeply reassuring. Eventually, it can really set you free. Repeat after me: I don’t really know what I’m doing. Neither do you. We’re all just making it up as we go along.

When we give up the need to control everything and plan for every conceivable outcome, we create space for the unknown. When we don’t have highly thought-out expectations of what’s going to happen, we make room for surprises and allow ourselves to journey into uncharted territory, and that’s where we find more fun and growth.

A few years ago I had to go to the Gold Coast in Queensland for a meeting, flying in and out on the same day. I’m always attempting three things at once, so when I arrived at the airport to pick up the hire car, I was on my phone with my laptop out trying to finish a pitch. When the woman finished the paperwork and handed over the keys, I mouthed my apologies for being so distracted and got on my way.

Still on the phone, it took me a good ten minutes to locate the car. A little hot and sweaty by now, I threw my bags in the back and jumped in the driver’s seat, where something immediately felt not quite right. I glanced at the gearstick to my left. Aha! It was a manual car. I had no idea how to drive a manual car. By this time, I was running late for my meeting and was faced with two options: get my bags back out of the car, race back into the airport terminal, get even more hot and sweaty, stand in line, get a different car and be desperately late to the one meeting I’d flown in for.

Or, I could wing it.

In a split second, I chose the latter.

Anyone who was also driving around the Gold Coast that day would have seen a car bunny-hopping its way along the road, the driver cursing as she went. I cursed my parents for not insisting I learn to drive manual, I cursed the car companies for even inventing manual vehicles, and I cursed myself for thinking I could learn this skill on the fly.

One of best things to come from winging it is the stories you’ll have to tell and the way you’ll be able to make others feel. I arrived at my meeting, smiling from ear to ear, confessing that I’d just taught myself to drive a manual car in the previous 40 minutes. Of course, everyone thought I was a little bonkers, but I didn’t care. I’d done it and I felt on top of the world.

When you wing it, you learn how to trust yourself and develop more confidence. You start to believe that everything is going to be okay, and if not, at least you’ve felt something you’ve never felt before and you’ve tried something new. And that, my dear friend, could just about be the meaning of life right there.

Let me be clear: winging it is not the reckless absence of a plan. Nor is it the complete lack of skill. It’s about not being so set in a plan that it prevents you from being led in different directions.

You should absolutely have a plan for your life, and for your business or career. But you should also give yourself the flexibility to pivot and weave when the situation calls for it.

WINGING IT means saying yes and working it out later.

WINGING IT means trying something before you think you’re ready.

WINGING IT means less second-guessing yourself and more going with your gut.

WINGING IT means less time spent trying to concoct the perfect plan and future proof yourself for dramas that probably won’t eventuate.

WINGING IT means more time for going with the flow and celebrating the unexpected.

WINGING IT means getting comfortable with the uncomfortable.

WINGING IT allows you to try the thing you might hesitate to do if you had too much information.

WINGING IT is the act of believing in yourself enough to give your dreams a go.

WINGING IT puts you in control, and that’s exactly where you deserve to be. 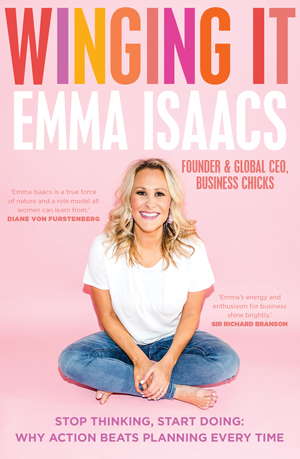 Brian Chesky, co-founder of Airbnb, once said, ‘Live and think like a child. Or have that childlike curiosity and wonder. That’s probably the most important trait you can have, especially as an entrepreneur.’

This way of thinking offers a beautiful alternative to living your life constantly comparing yourself to others and wondering if you’re doing it right. Let’s all get back to being more childlike, having fun and being curious. Let’s stress less and stop taking ourselves so seriously. Let’s get back to experimenting and failing.

Let’s get back to winging it.

This is an extract from Winging It by Emma Isaacs. Now available for pre-order in the USA now.

Live in Australia and haven’t bought your copy yet? Whatcha waiting for? Order your copy of Winging It now.