‘I wish I‘d never gone up on that balcony.’

‘I wish I‘d never gone up on that balcony.’

We sit down with the incredible Sam Bloom 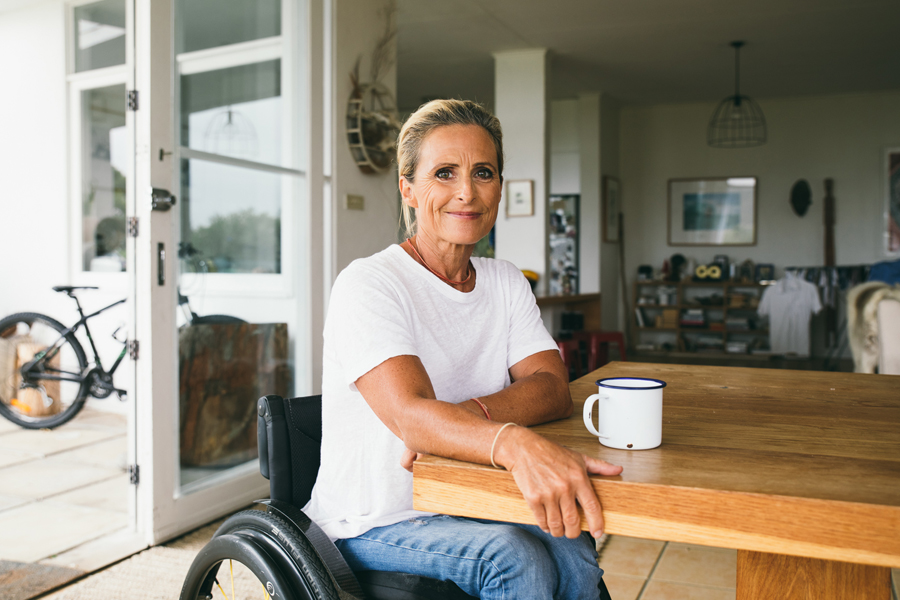 Sam Bloom experienced a life-shattering injury on holiday in Thailand and was paralysed from the chest down. Her story from rock bottom to world champion canoeist has even inspired a Hollywood movie.

It’s one of those stunning cloudless summer days the morning I arrive at Sam Bloom’s Northern Beaches home in Sydney. Walking up the steep driveway I spot a magpie sticking its beak in the front lawn. Even though I know he’s since flown the coop, my mind immediately goes to Penguin, the baby magpie the Bloom family nursed back to health and became an integral part of Sam’s recovery.

Meeting Sam, you instinctively get a sense of her youthful cheekiness, but also of her pain. Before the accident, Sam was content. Life was better than good. She had three boys with the love of her life; she loved her job; she was the fittest and healthiest she’d ever been, and as the boys grew older,  life with a young family was becoming easier.

Until it became much, much harder.

It was on a family holiday to Thailand in 2013 that Sam’s life changed forever. The family was staying at a resort in a tiny village on the Gulf of Thailand. On the first morning they arrived, they went for a swim, and then decided to take in the view of the stunning turquoise water from the hotel’s observation deck.

The family walked up the spiral staircase to the two-storey deck. It was here where Sam leaned against the balcony railing. Unbeknownst to Sam, the balustrade was rotten, and moments later she fell. Two storeys. Six metres. Twenty feet.

Sam fractured her skull in several places, ruptured both her lungs; her brain was bruised and bleeding, her spine shattered at the T6 and T7 vertebrae in line with her chest, and she was lying unconscious in a pool of blood.

It wasn’t until she was back home in Australia in the Royal North Shore hospital that it sunk in that life wasn’t ever going to be the same.

“They told me, ‘You’ll never walk again,’” Sam says of the doctors in Sydney. “And I just broke down.” 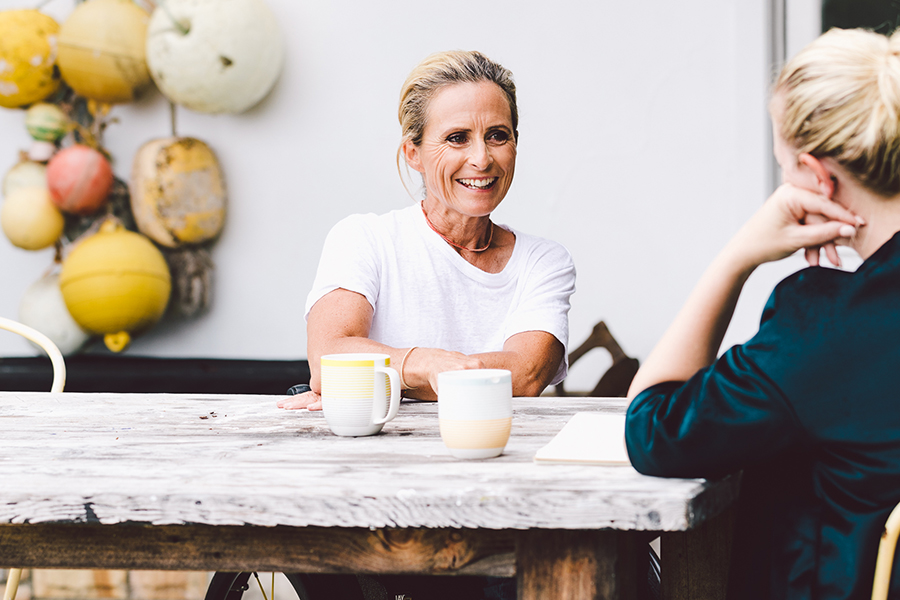 “I wish I had never gone up on that balcony. I always say it’s like I died that day in Thailand, and this shell of me is what came back.”

Her admission is frank, confronting and hard to hear. There’s no sugar-coating the situation, but then again, that’s not Sam’s style. She goes in more for breathtaking honesty, heartfelt vulnerability and absolute courage. I ask her if a big part of feeling like that is because she hadn’t achieved all that she wanted to before the accident.

“Absolutely. I wanted to keep travelling. I wanted to go to India, and I wanted to go back to Africa.Nothing is spontaneous anymore. I can travel, but it’s not easy, we have to plan every detail. I can’t just jump in the car and go for a surf, it’s a whole operation now.”

Growing up on the Northern Beaches of Sydney you can’t help but take part in an active upbringing. The golden sand beaches and nearby bushland are the perfect playground to run, hike, windsurf, kayak, swim and surf. It’s those last two that Sam misses most.

“I used to like my own company. I had plenty of friends, but I’d love to just go for a surf or swim or walk to the lighthouse on my own.” It’s a cruel twist of fate that Sam can easily see the sparkling waters of Bilgola Beach from her house.

It’s where Sam grew up. It’s also her favourite surf spot.   “I used to surf almost every day at that beach,” she says looking out to the ocean. “I wanted to move when I first came home.I wanted to go somewhere where my old life wasn’t rubbed in my face. I didn’t want to be reminded of what my life used to be like.”

“I was no longer an independent woman, and I no longer thought of myself as a wife and mother. I know I’m lucky that I’d already had the boys, but I feel guilty all the time. I feel guilty that I’m not a good mum.”

Understandably, Sam went into a dark place. Reality came crashing, hard. “I felt like I no longer fit in,” Sam says. “I was no longer an independent woman, and I no longer thought of myself as a wife and mother. I know I’m lucky that I’d already had the boys, but I feel guilty all the time. I feel guilty that I’m not a good mum.

“I used to be relaxed and happy. I was so active, I’d ride bikes and kick a soccer ball, and be able keep up with them.”

Guilt is a recurring theme in Sam’s life, and we talk about whether or not it stemmed from another sliding doors moment in her life. In her twenties, Sam was travelling the world with her friends. Sam had lost her money (this was pre-internet and instant bank transfers) and had to head home while her friends continued on the overland tour in Africa. The truck she was meant to be travelling on was ambushed, and one of her close friends was fatally injured. “I wish I was there when he died. I felt really guilty that I wasn’t there for him.”

I ask if she thinks it was fate that brought Penguin, the injured baby magpie her son, Noah found at her mother’s house, into her life. Penguin – whose survival closely echoes Sam’s own – fell sixty feet out of her nest in a Norfolk Island pine tree onto the hard asphalt below. She doesn’t, nor does she think the bird was somehow a metaphor for her recovery, but there’s no denying she lifted Sam out of a deep depression.

Caring for Penguin gave Sam a focus and helped her feel useful again. Her nursing and mothering instincts kicked in, and suddenly she was able to care for something instead of feeling like everyone had to care for her.“I didn’t realise it at the time but, in a way, we were keeping each other alive.”

“I was so bored at home, everyone else was going off to work and school, and I was just sitting at home. I felt like I was under house arrest,” Sam says. “And when Penguin came along I had a constant companion. It sounds funny, but I’d talk to her all day. I’d tell her what I was going through, and it helped.” 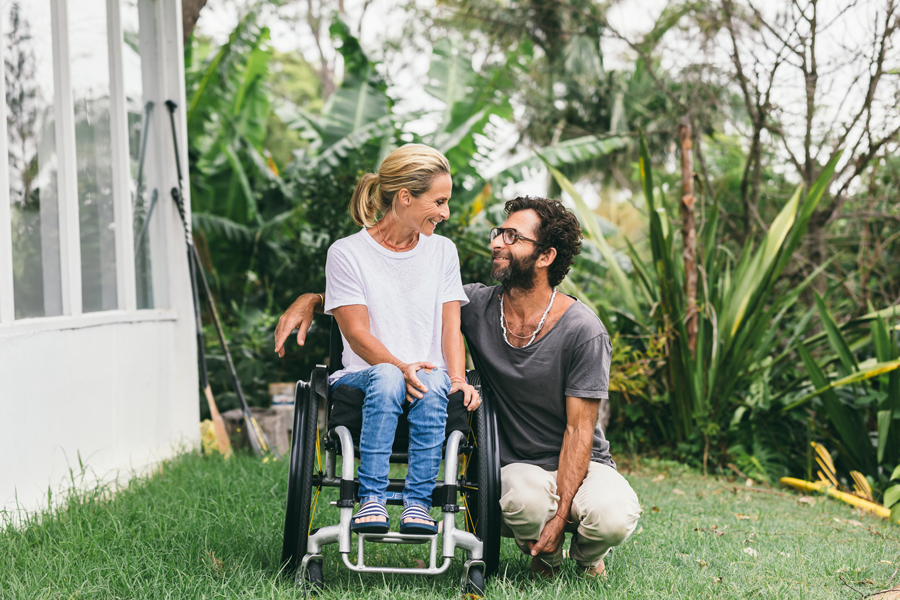 As Penguin’s strength returned, so did Sam’s, within two weeks of returning home, she was back in the gym exercising and doing her physiotherapy sessions. She also rediscovered her love of watersports, taking up kayaking. She went on to win two national kayaking titles and represented Australia at the para-canoe team at the World Championships in Italy.

Last year she made the Australian Adaptive team then just six months later won Gold in Womens and Bronze in Open at the World Champs. Capping it off by taking out the World Adaptive Surfing Title in California, with her husband Cam by her side. An amazing feat considering she swore she would never surf again after her injury.

“It was unreal,” Sam says. “I’m so proud of what we’ve achieved, but I really wanted to win for the boys. The boys are a lot tougher than me.

“At the time of the accident, Noah was really angry. And now he jokes with me, ‘Are you Sam Bloom? Are you a World Champ?

“They show me how to just get on with it.”

The Bloom family’s story has inspired a new movie starring Naomi Watts as Sam, with Bruna Papandrea (the talent behind Big Little Lies) as executive producer. Naomi was recently in Sydney to support the Bloom family at the GQ Awards. Cam was nominated, and won the GQ Creative Force Of The Year, for his work documenting Penguin and Sam’s emotional recovery. His pictures inspired Bradley Trevor Greive to turn their story into a best-selling book, Penguin Bloom.

Sam’s eyes light up when she talks about husband, Cam who is never far from her side. “It’s made us stronger, he has to put up with a lot!” Witnessing the couple in action is beautiful to watch.  Playful, funny, and so much in love you can tell their bond is an incredible one. The pair have been together since their twenties and have known each other even longer. As a teenager, Cam would go into Sam’s family bakery for a pie after a surf in the summer months. “I thought he was such a spunk.”

Other than the GQ Awards, the Blooms haven’t spent much time with the Hollywood A-lister, but they’re excited about the movie, which will be filmed on location at their house. “Naomi will have to be very good at crying,” Sam says laughing. “I just want it to be honest and realistic as possible.”  Ironically, even though Sam is paralysed from the chest down, she’s still in a lot of pain. “I do get cranky, I’m in pain every day. It’s neuropathic pain. It feels like fire, it’s like the sensation of being stung by bees around where the break is,” Sam says of her spinal cord injury. Describing the pain around her legs like having bluebottles wrapped around her limbs, you can’t help but feel how desperately unjust her circumstance is, and marvel at how she’s pushed through that to become a world champion.

Six years on from the accident, Sam is still finding wholeness in herself; and in the story she has lived. Although she describes herself as ‘nothing out of the ordinary,’ spending even a short time in her presence will convince you otherwise.

Sam Bloom will be talking at our International Women’s Day events in Adelaide and Melbourne in 2020, book your tickets now to listen to her incredible story firsthand.