Sarah will be joining us for ‘A Life of Meaning’ breakfast tour in April and May. 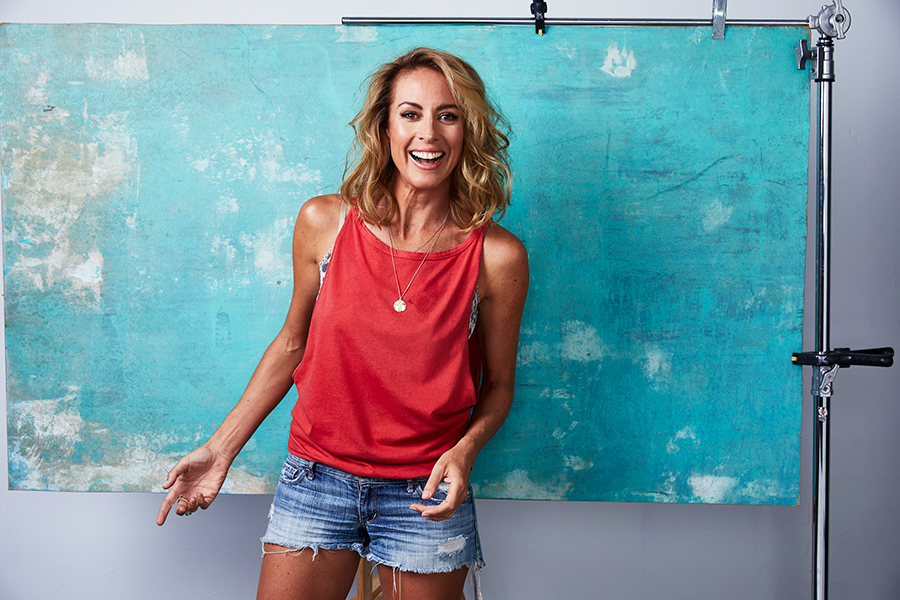 Sarah Wilson is joining us around the country for ‘A Life of Meaning’ breakfast series in April and May.

Over breakfast, Sarah will show you how you can create a life – and career – from values. Drawing from a 24-year career in media, including running her own digital business and social movement, Sarah will share the techniques she used to return to purpose and her values at every turn. These same techniques helped guide her through her struggles with bipolar and, at times, crippling anxiety. These strategies are what enabled Sarah to take big risks and dive into the unknown as an entrepreneur, and into life in a more meaningful way.

Sarah’s refreshingly frank view on anxiety is calming minds across the nation. Read on for an extract from her best-selling book, First, We Make the Beast Beautiful: A New Story About Anxiety.

His Holiness [The Dalai Lama] kisses my hand and tosses his thongs aside. We sink into adjacent hotel room lounge chairs. I still don’t have my one question. So I ask the most authentically pressing thing in that exact moment: ‘How do I get my mind to shut up?’ You know, to stop the fretty chatter that makes us so nervous and unsettled and unable to grasp the ‘present moment’ at the end of yoga classes when the instructor talks about it as though it’s something you can buy off the shelf.

His Holiness giggles and blows his nose on a paper serviette, shoving it down the front of his robe like my Year 4 teacher used to. ‘There’s no use,’ he tells me. ‘Silly! Impossible to achieve! If you can do it, great. If not, big waste of time.’

I mean, is the Pope a Catholic; can the Dalai Lama still his mind?

‘Noooo. If I sit in a cave for a year on mountain, then maybe I do it. But no guarantee.’ He waves his hand. ‘Anyway, I don’t have time.’ He has better things to do, he tells me. Like teaching altruism to massive crowds around the world. His Holiness then tells me about his recent trip to Japan, how he hits his running machine at 3am every day and all about his anger issues (yes, the Dalai Lama gets cranky!). But he says nothing further about the torturous human experience of having a fretful, frenzied mind that trips along ahead of us, just beyond our grip, driving us mad and leaving us thinking we’ve got it all terribly wrong. It was as if the subject bored him.

I leave feeling deflated and anxious. I didn’t exactly have a pearly insight for my column. But a few days later I was defending his seemingly flaccid response to my close mate Ragni and I realised what His Holiness had done.

He’d given me a response that came with a screaming, cap-lettered subtext: YOU’RE OKAY AS YOU ARE!!! He’d given me – and everyone else out there whose whirring thoughts keep them awake until 4am, trash-talking their poor souls into agitated despair – a big, fat, red-robed hug. It was perfect.

Now, a strange thing happens when you realise that some gargantuan, all-looming issue you’d been fretting over no longer needs to be fixed. You take a deep, free breath, expand a little, release your grip and get on with better things.

I suspect you might be reading these words here because you’re a fretter with a mind that goes too fast, too high, too unbridled. And, like me, you might have tried everything to fix this fretting, because fretters try really, really hard at everything. They also tend to think they need fixing. And like me you might have wondered if there’s another way.

I’d like to say this up front. I write these very words because I’ve come to believe that you can be fretty and chattery in the head and awake at 4am and trying really hard at everything. And you can get on with having a great life. Hey, the Dalai Lama told me so.

Actually, I’ll go a bit further. I’ve come to believe that the fretting itself can be the very thing that plonks you on the path to a great life.

When God was handing out The Guidebook to Life I was on the toilet. Or hanging out nappies for Mum. I was, I believe, the only person on the planet who missed out. The first time this realisation came crashing down on me I was fifteen, crouching in an Asian-style squat behind a curtain in a Canberra shopping mall waiting to see if I’d won the inaugural Face of Miss Gee Bees modelling competition.

Miss Gee Bees was the teen section of the now defunct Grace Bros. department store behemoth, should you be too – young to know.

A few months earlier a matronly fitting room attendant had stopped me as I flicked through her bra rack and asked if she could take a photo with her point-and-click. ‘Yeah. Okay,’ I said and half-smiled, half-frowned for the camera. I got a letter two weeks later inviting me to attend the finals being held at the mall’s centre stage. Up for grabs was a modelling contract, a Dolly magazine shoot and a bra and knickers package.

The other finalists chat and laugh as we wait for the judges’ announcement. They’re glossy and cheerleader-y and all seem to be wearing the same Best & Less stilettos and black lycra micro-dresses that they keep adjusting over their bottoms, but without bending over. Because to do so would muck up their hair-sprayed quiff-fringes, a few strands combed forward over their eyes.

I hadn’t got the Robert Palmer memo.

I’m wearing an ankle-length white poly-cotton peasant dress with beige slouch socks and worn tan Sportsgirl brogues with splits in the soles. It’s a bit Linda Kozlowski in Crocodile Dundee. A little bit Out of Africa. I’d borrowed the dress from a girl at school and I’d carefully hand-stitched the princess-line seams in a few centimetres to fit. Dad Araldited the splits in my shoes and dried them on the hot water tank overnight.

I’m feeling nervous. And, oh boy, so terribly alone. Also, this had just happened. On my second run on the catwalk for the Saturday morning shopping crowd I’d spun in front of the judges. All eyeballs were on me. And. Then. Time seemed to stop and the world went silent like it does just before a bushfire.

And. Then. A tightly packed wad of toilet paper dropped from under my dress and landed with a light pfft, right in front of the judges.

As an awkwardly undeveloped teen, I’d do this thing where I’d stuff tissue or toilet paper into the sides of my underpants to give me hips where I had none. I wore jeans mostly, and would stick the toilet paper in the pockets, wash them and then bake them in the sun, creating papier-mâché insta-curves. I’d also wear two – sometimes three – T-shirts at a time, rolling the sleeves up over each other, and football socks with ankle boots to bulk out my undersized frame. I was an optical illusion of womanly shape that had to be carefully, anxiously, constructed each morning.

From the back of the crowd Dad whooped, ‘You little beauuuuty!’ like he did at sports carnivals when my brothers and sister and I ran into the home straight, no matter our placing in the pack.

I scampered off behind the curtain. Was I mortified? Ashamed? No. This wasn’t the issue. The ordeal had instead triggered a panic, an overwhelming and lonely panic of the most fundamental kind.

I was breathless and alert in the car on the way home with my second-place bra and knickers package. Entirely unanchored, dangerously adrift. In this moment I fully believed that I didn’t get it. I didn’t ‘get’ life. And everyone else on the planet did. They’d got The Guidebook. They got the missive that showed them how to interject in a jokey conversation.

They got the instructions for choosing the right career path. They seemed to somehow know why we existed. Shit! Shit! How was I going to get through this thing called life? But! One of the dear, dear things about getting older, is that it does eventually dawn on you that there is no guidebook. One day it suddenly emerges: No one bloody gets it! None of us knows what we’re doing. Thing is, we all put a lot of effort into looking like we did get the guide, that of course we know how to do this caper called life. We put on a smile rather than tell friends we are desperately lonely. And we make loud, verbose claims at dinner parties to make everyone certain of our certainty. We’re funny like that.

Stephen Fry wrote in The Fry Chronicles that behind ‘the mask of security, ease, confidence and assurance I wear (so easily that its features often lift in to a smirk that looks like complacency and smugness) [is] the real condition of anxiety, self-doubt, self-disgust and fear in which much of my life then and now is lived.’

Two things about this. Thing 1. It’s the most incredible relief to know that we’re all wearing masks . . . and to see them slip on others. Oh, sweet Jesus, we’re not alone! We’re in this together! It’s not a mean-spirited schadenfreude; it’s the ultimate connection. Really it is. My beaut and brutally frank mate Rick rang and asked me one morning, ‘Darl, why exactly are you writing this book?’

‘Because I can’t help it and because I’m sick of being lonely,’ I replied. Then I quoted something I’d read that morning from philosopher Alain de Botton’s The Book of Life: ‘We must

suffer alone. But we can at least hold out our arms to our similarly tortured, fractured, and above all else, anxious neighbours, as if to say, in the kindest way possible: “I know . . .”’

‘Good,’ Rick said and hung up. Thing 2. When you realise there’s no guidebook, an opportunity suddenly presents itself. If no one knows what they’re doing, if there’s no ‘right’ way to do life, then we can surely choose our own way. Yes?

Hear more from Sarah her during our ‘A Life of Meaning’ breakfast tour in April and May, tickets are selling fast, head to our events page to secure your ticket before they’re all gone!