My mind was always 10 steps ahead robbing me of the opportunity of enjoying the present moment. 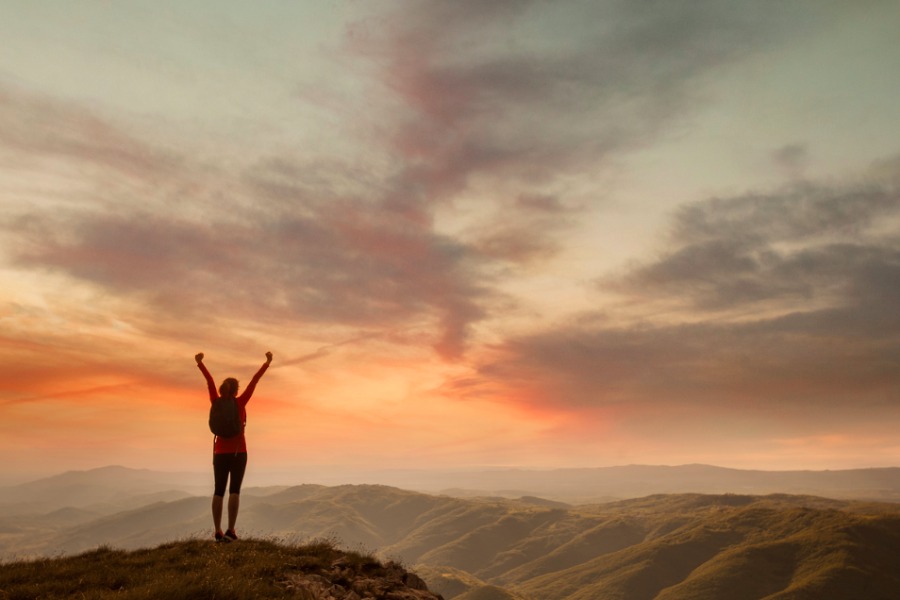 They say that when we hit rock bottom there is only one way we can head and that is back up. What they don’t tell you is that this journey can be the most cathartic and authentic experience imaginable.

I had long been ignoring all the signs that my body was shutting down. They were subtle at first; my hair started to thin, ulcers would regularly appear in my mouth, my body ached and my eyesight was beginning to deteriorate. I chose to ignore it telling myself that I was invincible because the reality of what those signs may have meant terrified me. I had an image of what my life should look like and nothing was going to get in its way, not even my health.

And so I went about my life juggling both career and motherhood at a fierce pace. Everything moved fast, every moment was accounted for and there was no down time. My mind was always 10 steps ahead robbing me of the opportunity of enjoying the present moment.

The universe works in mysterious ways. It sends us messages and signs when we are headed towards danger, but I was so out of touch with myself that I missed them. I could be driving towards a flashing billboard with the neon words, “Melanie, you’re about to get very sick,” blinding me and still not see it.

And so I forged ahead and the signs became more extreme. My concentration was poor, my mood swings severe, and I was constantly tired but still couldn’t sleep. Yet still, I took no notice and went ahead on my path to self-destruction until that fatal day in 2009.

After dropping my children to school I returned home and went straight to bed.

In the days before I had lost the job that had been my life for over a decade. Every part of my identity was caught up in my career and the loss took me by complete surprise. I worked long hours and travelled constantly believing self-sacrifice was the key to self worth. Mistake #1.

In the days, weeks and even months that followed I became a shell of a person. My brain didn’t function properly, my confidence hit an all time low and my energy levels were totally depleted. After taking my children to school each morning I would spend the entire day asleep until the alarm alerted me that it was time to collect them. I would arrive at their school looking disheveled and despondent, a stark contrast to the once outgoing and sociable mother in the schoolyard. It would take every ounce of energy I had to get my daughters through their evening and then I would collapse back into bed the moment they were asleep.

On the insistence of those around me, I eventually mustered up the courage and energy to see my doctor. I was diagnosed with adrenal failure or “burn-out”. This is not something that just happened over night but was more a gradual accumulation of stress, poor health and a build up of unresolved pains stemming right back to my childhood.

The diagnosis was not a shock to me. If you had asked me back in the time of my heightened career how I felt I would have intellectualized my response. I felt successful, I felt powerful and I felt capable. However on some level deep down, I knew that it was only a matter of time until the wheels fell off the cart and so I was doing all I could to prolong the time until that happened.

My doctor prescribed me with strong levels of anti-depressants and mood stabilizers that I started taking immediately. I believed that they would magically make everything better and that was all the work I had to do. Mistake #2

My recovery was long and at times very painful. I remained on medication for a number of years numbing myself emotionally and spiritually. I became withdrawn, resentful and had all but given up on the possibility of living a happy life. I moved with my children to Europe believing that if I could run as far away from my former life as I could, I would also distance myself from the problems associated with it. Mistake # 3.

I found myself living on a different continent far away from my family and friends. I was taking enormously high levels of medication but still felt miserable. I had well and truly reached the bottom wrung and I knew that unless I dug deep and made some enormous life changes that this would be my legacy. I knew I could do better for my daughters and myself.

They say that when we hit rock bottom there is only one way we can head and that is back up. What they don’t tell you is that this journey can be the most cathartic and authentic experience imaginable. It is not to be feared, it is like a rebirthing but this time, we are in control.

After three years away I returned to Australia with one mission. To live my true and authentic life. I had lost everything and while that notion would have once horrified me, I now looked on this as a cleansing. This was a new beginning.

I slowly weaned myself off all medication and gradually the dark cloud that I had been living under began to shift. I felt like I had existed in a fog for so long and now I finally had clarity to see things for what they were. I laughed louder, I loved harder and my passion for life returned stronger than ever.

I decided to return to university to pursue my passion for writing and after three years of full time study and at 44 years of age, I obtained my Bachelors degree in Professional Writing and Publishing. With this came a sense of accomplishment and little by little my belief in myself returned.

Meditation became a fundamental part of my daily ritual. I found that in the space of silence comes our greatest wisdom. It was as if my heart had found a voice that would now lead me to live the true life that I was born to live.

There is something wonderful that happens to a person when their life shatters into a million pieces, we get to rebuild ourselves. Each piece is firmly cemented to the other in a way that we decide is the right fit. Our edges may be a little jagged and we will never be exactly the same as the original mould, but this is what makes us unique.

My physical, emotional and spiritual wellness is now the force that guides me. I take time for the experiences and people that infuse me with happiness because I have experienced the other side. And as painful as that was I wouldn’t change a thing because I was rewarded with the greatest gift. My life.

This was first published on Thrive Global.

Melanie Sheppard is a writer, blogger and a passionate activist for women’s rights. Mel’s also a Premium member and long time supporter of Business Chicks, you can connect with her here.
Images: iStock
Share this Post