Overcome those doubts and unlock a shiny new vision of yourself 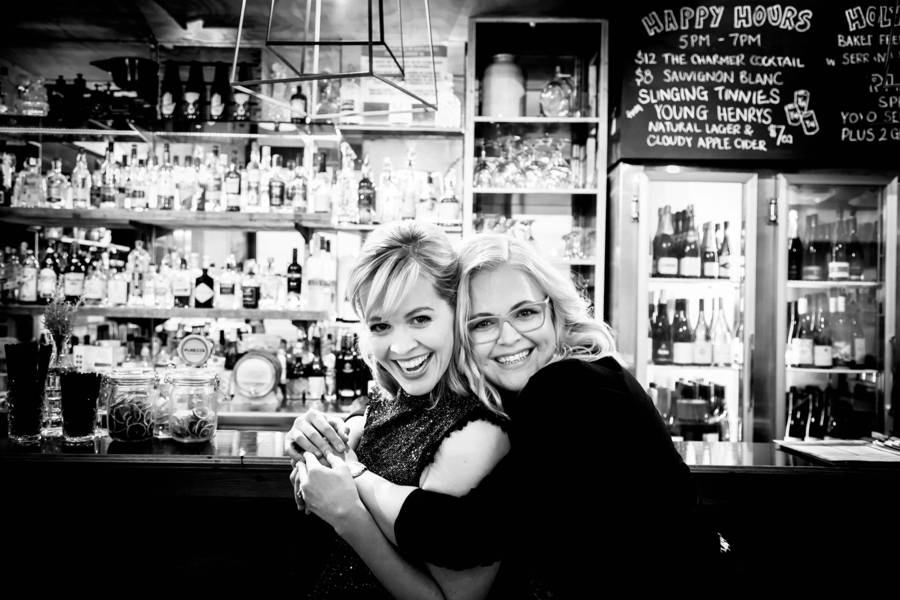 Taryn Brumfitt and Dr Gemma Munro are great mates and, between them, they’ve got a PhD, a Hollywood-busting documentary (you probably remember Taryn’s hit Embrace), a global movement, two seven-figure businesses and 16 awards – not to mention five kids, two step-kids and a gazillion hilarious dating stories.

They’ve also got divorces, five heartbreaks, seven career changes, one bad business break-up and (approximately) 72 burnouts to their credit (the adrenal kind, not the rubber-on-the-road variety).

Basically, they’ve been through the wringer and learnt a lot – and we were lucky enough to be on the receiving end of their wisdom in our recent masterclass (which was thanks to our mates at Aspect Skincare, who want you to embody and celebrate the best version of you). Here are some of Taryn and Gemma’s juicy takeaways on fear and doubt, unlocking your vision and having the boldness to say yes to a take-the-plunge life.

Wishing will get you nowhere

“People often come up to Gemma and me and say, ‘I wish I could have been confident enough to do that,’ or, ‘I wish I could be that person …’ Wishing will get you nowhere,” says Taryn. “A juicy, bold, fulfilling life that gets you off the sidelines and has you putting your hand up, levelling up and being first on the dance floor? It’s not wishing that will get you there. The recipe is persistence, hard work, determination, love and passion, the will to not give up, and having a vision.”

Don’t just set a vision for your life – feel it

“Research shows it’s not enough to simply have an intention,” says Gemma.

“We need to feel the desired feeling we’ll get when the vision is achieved.” Taryn adds, “An example is when I was working on the film Embrace which was years in the making. What kept me going was thinking about what it would feel like when people watched the film on the screen for the first time; what it would feel like to stand in front of a live audience and hear their laughter. Even now I can feel that excitement.”

Learn to dance with fear

“I used to be paralysed by public speaking in my 20s, especially in the boardroom,” says Taryn. “And when I walked on stage to speak for Business Chicks – in front of 900 people! – I was shaking. I went up to a friend of mine, Nigel Marsh, saying, ‘Nigel, I’m so nervous!’ He replied, ‘Taryn, it’s not about you, it’s about them – you’ve got something really important to say, so go and say it.’ My tip on overcoming doubt and fear is to get out of your own way. For me, what works is acknowledging the fear and then asking myself, ‘Is it real? Have I had a few vinos the night before and am I super-unprepared? If so, it’s probably real and next time I’ll do better. The more likely scenario, though, is that the fear is out of proportion and my mind has run away. More often than not the fear is worse than whatever is happening. Fear can be a beast.”

Gemma agrees. “The fear versus fact technique is the best – asking yourself, is the fear actually a fact, or is it in your head? Another way to overcome fear is to ‘just start’ – start whatever it is you’ve been dreading by setting a timer for five minutes, and you’ll find you usually have momentum by the end of it. Or imagine the worst-case scenario and how you’d handle it – you’ll generally find you’ll be OK and survive. Finally, imagine what one of your heroes would do. For me, that’s Michelle Obama or Julia Gillard!” Taryn adds that we should “dance with fear”.

“Instead of the butterflies making me vomit when I went on stage,” she says, “I turned the nervous energy into excitement – instead of pushing the fear away, I let myself feel it.”

If you’re feeling unmotivated to keep going, try a ‘no’ day, where you switch off so you can fill your cup again. “Taryn and I recently finished an exciting project, but it took so much out of me, I stayed in bed until 2pm on the Saturday after watching Call my Agent! Sometimes you just need a no day,” says Gemma. Also, if you feel overwhelmed by people asking you to do things, find a polite way to say no if they’re not in line with your vision so you can say yes to the things that are.

CEOs have fears and doubts too

“We’ve worked with and met some of the world’s most phenomenal leaders and CEOs and it’s incredible that they have all these doubts and fears too. We tend to put people in categories and think some people have it all going on, but no one does,” says Taryn. “Nope,” agrees Gemma. “In fact, the most common thing I hear when I sit down with all these amazing people is them whispering to me, ‘They’re all going to work out I’m a total fraud!’”

Be your own best friend

“The most important person in your life is you,” says Taryn. “Being your own best friend is key to unlocking your own professional goals and personal happiness. What happens if you’re not your own best friend? You get sick. Your output is less because you’re clouded. Your mental health suffers. For me, it’s about meditation, journaling, walking – if I can do all three in the morning I know that what whatever happens in that day, I’ve had that time. One minute a day of meditation can change my entire outlook.” If you’re a parent, Gemma adds, it’s so easy to put yourself last. To help her with this, she thinks of her daughter and what she’d want for her in the same situation. “I’m role-modelling for my daughter,” she says. “If she seems me burnt out, she might end up doing that in her own life – and I don’t want that for her.”

How to set a vision

Gemma says to use this formula when setting your vision: the first letter of each point below spells the word ‘happy’.

Head to alpha. We can’t set a vision when we’re in stress, or ‘beta’, mode – we need to be calm. Here’s a trick to quickly get into ‘alpha’ mode, says Gemma: “Close your eyes and take a few deep breaths. When you open them, soften your gaze so you’re not staring directly ahead but also looking peripherally. That gets you to your alpha state.”

Ask with curiosity. “Sometimes we make the mistake of demanding, ‘I want this, I want that,’” says Gemma. “Instead, ask for what you want with a sense of curiosity and openness. ‘I wonder what if would feel like if …’ or, ‘I wonder what it would be like if …’”

“Many people are resistant to this because it feels too woo-woo,” adds Taryn, “but science backs this up and says we need to be open and curious.”

Play with the answer. Gemma suggests trying ‘automatic’ writing to play with what your vision could look like. Write this down: ‘It’s two years from now, and I am so excited to be …’ Then complete the sentence and see what comes out, without editing it.

Pause in the feeling. “We need to feel the desired feeling we’ll get when the vision is achieved. The thought is the electronic signal, the emotion is the magnetic signal, and we need both,” says Gemma. “It’s not enough to say it,” adds Taryn. “The universe is more about what we’re feeling – I immerse myself in the feeling from top to toe.”

Yes. This is about saying yes to aligned action and serendipities that come into your life – so being open to things that come your way even if they seem out of left field. Taryn says, “When you’re working towards a specific goal, make it visual: I stick notes everywhere, use a vision board, a whiteboard at work … anything I can see all the time. I even set an alarm on my phone to remind me of it! Life can get in the way of connecting us to that feeling.”

Want more Gem and Taryn? ’Course you do! Just head here.  You can find out more about our masterclass sponsors Aspect Skincare (and how to get ridiculously radiant skin) here. Aspect want to inspire you to embody and celebrate the #BestVersionofYOU, whatever that may look like.  To celebrate IWD, they’re giving away $1000 worth of their gorgeous products. Just enter here before 31 March and they could be yours!