The Hunger Project: In Malawi, 11,000 kilometres from a comfort zone

The Hunger Project: In Malawi, 11,000 kilometres from a comfort zone 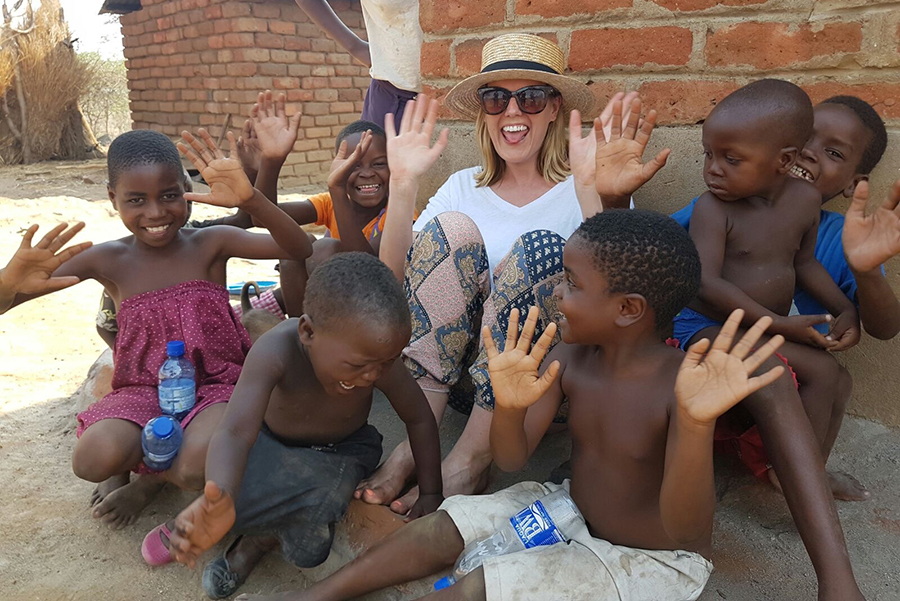 In Malawi, Lucy Cheek travels 11,000 kilometres from her comfort zone – and discovers remarkable leadership in the unlikeliest of places.

When talking about the year that was last year, a glossy women’s magazine had a page with a headline that screamed, ‘It’s been a very hard year!’ – followed by a bunch of designer accessories we could buy to cheer ourselves up after such a ‘hard’ year. It was the year of Trump and a major setback for women; terror attacks; Brexit; Syria, and the losses of Prince, Carrie Fisher and David Bowie. Nope, 2016 wasn’t a great year, and an olive-green quilted Chanel bag would probably go a long way to help.

But reading this made me angry. Because, for your average Australian, this ‘hard’ year did not really affect us at all. How hard is life in Australia? There are injustices – marginalised communities and people living in poverty who absolutely shouldn’t be. But most of us have running water, electricity, shelter and plenty of food. A majority of us have basic needs all wrapped up; we have access to everything we need. We have the privilege of choice – we can choose when to marry and have kids, where to work, who to vote for, where to go for dinner.

It’s easy to forget how lucky we are – I’m definitely guilty.

Malawi is one of the world’s poorest countries, ranking 173 out of 187 on the UN’s Human Development Index. One in 10 adults has HIV and more than 50 per cent of the population lives on less than $1.25 a day. A third of Malawian girls will give birth before their 18th birthday. The average life expectancy of a Malawian is 39 years of age.

Recently, I travelled to Malawi – nicknamed the ‘warm heart of Africa’, thanks to its welcoming people – with Business Chicks and The Hunger Project on a Leadership and Immersion Program. I raised $10,000 for this trip, the first step in the leadership journey, and saw first-hand where my money is going: towards a better life for the people of Malawi, especially women and children.

The Hunger Project’s approach is unique. Many programs treat hungry people as passive recipients of aid, rather than resourceful individuals. The Hunger Project doesn’t throw money at poor communities; instead, they believe that the communities alone are a resource in ending their own hunger. It takes a long time – between six and nine years – for an epicentre to reach what they call self-reliance, where the villagers have shifted from resignation and dependency to relying on their own resources, leadership and capabilities. They don’t just need a water pump – they need millions of empowered people. They need great leaders.

Over 10 days in Malawi, I learnt what a hard year really means for those not as privileged as me. I witnessed the work of some of the most unlikely, but most brilliant, leaders. I was 11,000 kilometres from home in Sydney – and from my comfort zone. 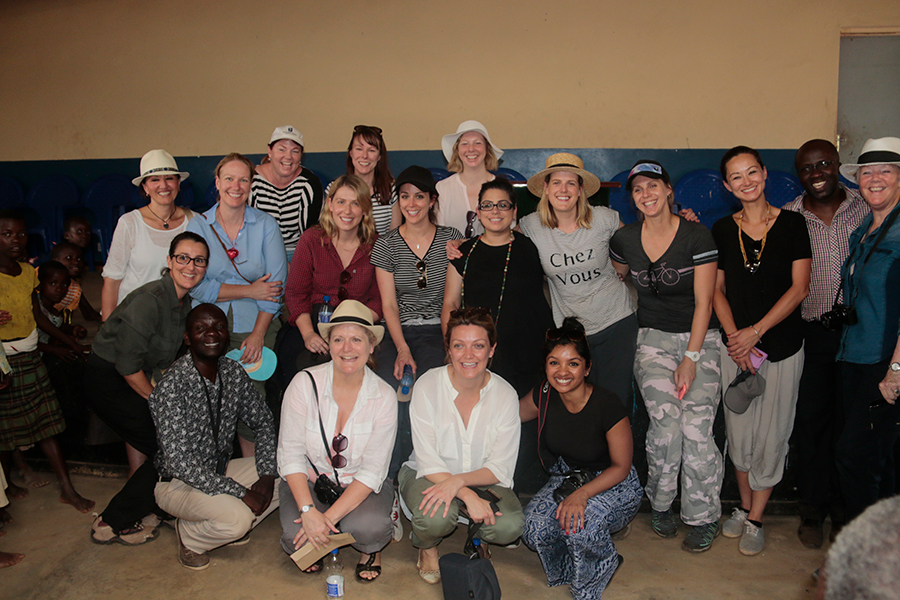 I’m sitting on a hard plastic chair in Malawi, Africa, with flies buzzing around my face. I’m uncomfortably hot. My pants stick to the plastic, and the sun beats down. I’m facing dozens of villagers who are sitting in the dirt, staring at me and my fellow travellers. The children are very silent. Big brown eyes blink at us. There are no Bugaboos for the babies. They’re wrapped in colourful kangas – sarongs – and carried on the backs of women, some who look like children themselves.

These villagers are in phase one of The Hunger Project’s work. They have heard about The Hunger Project; not far away, there is an epicentre, Majete 1, which was in the same position as them eight years ago. Today, it’s a thriving community with a food centre, hospital and bank.

But it’s hard for the villagers sitting in the dirt to even imagine this. Before we arrive, they’re told we’re investors in The Hunger Project. We’re seen as important people, hence why we have the plastic chairs – but I feel uncomfortable sitting above them, facing them. I’d prefer to be on the ground. I have never been farther away from my comfort zone.

The village chiefs stand up and welcome us (we have an interpreter, Grace Chikowi, who works for The Hunger Project). Then there is a ‘comedy’ performance, which shows a woman in labour walking to the nearest hospital, 17 kilometres away from this village. She keeps falling down as she walks. Apparently this is hilarious, but it’s the blackest comedy I’ve ever seen. After the performance, someone gets up and talks about how desperately the village needs an ambulance or any mode of transport. Pregnant women in particular aren’t able to make the walk there to have necessary prenatal check-ups. Can you imagine being heavily pregnant and having to walk for 17 kilometres along a dusty road in 38-degree heat, just for a check-up? If the child and mother survive the birth, the first five years are still critical. Malnutrition results in many illnesses for children in their first five years. You can see evidence of this in many of the children – swollen bellies and lighter coloured hair.

We’re supposed to be visiting some of the villagers’ homes; we’re way behind schedule. But Rowlands Kaotcha, the country director for The Hunger Project in Malawi, suddenly leaps to his feet and starts shouting at the villagers, who are looking listless. Rowlands has been working for The Hunger Project for 13 years. A Malawian boy, he was bullied at school because his mum couldn’t afford shoes for him. She mum walked miles just to give birth to him – they both miraculously survived. And he has been working his whole life so that his fellow people don’t have to go through what he and his mother did. Rowlands can see that the villagers are struggling to believe that their lives can be any different. (The first step in The Hunger Project’s work is visualisation – they have to shift their mindset from resignation to realisation that things can change.)

So he jumps to his feet and delivers a raw, fiercely passionate, impromptu speech about how they need visualise a bigger life – believing they can is the first step. If they don’t choose a vision for themselves, they’re living someone else’s vision. Change has to come from within. (I can’t help but see the parallels with my own life. How many times has a goal seemed way too lofty, impossible – because you haven’t believed in it?). In this moment, he could be Martin Luther King. I watch the villagers’ faces closely and see a flicker of something. Hope.

Grace Chikowi also makes a passionate speech about how the women should have access to a health facility, and the important of girls’ education. ‎Grace is the nutrition, gender, and HIV and AIDS Officer at The Hunger Project Malawi. Grace had a child who was stillborn, and she champions for proper maternal health, nutrition and women’s rights. She pumps her fists as she speaks, eyes blazing. In Australia, we have laconic, memorised speeches from stiff-collared pollies. What I’m witnessing with my fellow Hunger Project ‘trippers’ are leaders who are raw, real, off-the-cuff and so passionate about what they believe in that you’re moved to the core. I’m reminded of a quote I read once: “Eloquent speech is not from lip to ear, but rather from heart to heart.”

In Malawi, I didn’t just witness leadership in the form of spine-tingling speeches.

I met a leader of a women’s empowerment group who, upon hearing about a man who was beating his wife and children regularly, gathered a group of other women and went to his house and confronted him, and convinced him that violence was not the answer. Thanks to these women, he completely changed his ways and stopped beating his family.

We met a man who, thanks to a microfinance loan, had bought goats and started breeding and selling them. He was proud to tell us that he’d been able to help some neighbours out when they went through difficulties, giving them some goats to get started. It was humbling to see someone who has a small hut for a house, no running water or electricity give away some of what he has earned to someone in greater need. He’d put that before doing improvements on his house or getting a tin roof. A lesson in selfless leadership.

At one of the epicentres, people who were HIV positive were asked to stand up. They did, bravely. They weren’t ashamed. They were passionate about helping prevent the spread of HIV in their community. One of the women who had AIDS was sitting next to me. I hugged her as I got back on the bus; I’ll never forget her strength of character, but how frail she felt.

We met Sarah, who runs a small grocery shop from her house and also sells beautiful sarongs (kangas). Her success has meant that she has been able to put a tin roof on her house for family, and she was looking at expanding her house to accommodate her grocery business. Her old house, which was demolished and a pile of rubble, and is now part of her backyard, and is about the size of shed. She doesn’t have electricity, but she is hoping to soon.

Some of my fellow trippers met a 45-year-old woman who is the sole breadwinner for four children (she has seven, but four had left home). She has a husband, but she’s his second wife and he’s barely around. Her eldest son is around 35 (you do the maths), and one of her children is intellectually disabled. She gets up at 6am, and goes to the fields to work. This is usually tending a maize crop. She then walks home via the water source, where she carries back a large bucket of water. She makes lunch for her children and then may take a bath or wash what little clothes they have. She will then prepare for another walk to get water, and then come back to make dinner. She didn’t have any food for their evening meal on the day we visited though … so dinner wasn’t going to happen that night.

At one point, she asked us what we did each day. One of my fellow trippers answered. Her response? “Your life sounds perfect – you don’t have anything to worry about.” Pretty much.

I’ve always quite enjoyed my comfort zone. There are cushions, and lots of Netflix and cups of tea. But I also know, as icky as it feels, is that I have to crawl out of there from time to time. And the Leadership and Immersion Program was about as far from the cushy zone as it gets. Not only were we witnessing others transforming their lives through vision, commitment and action and great leadership, but we also had to dig deep within, and find out what we wanted to commit to in our own lives. (With my fellow Business Chicks, there were some intense workshops and enough tears to fill Sydney Harbour twice.)

I left Malawi with a plan for my future, immense gratitude for my lottery-won life in Australia, and knowing that I would forever remember the warm hearts I met along the away.

Applications for The Business Chicks and The Hunger Project 2018 Senegal Journey are open now. Click here for more info and to register your interest.