‘The powerful lesson I want to teach my son’

‘The powerful lesson I want to teach my son’

“There’s this idea that, as a parent, all we want for our kids is for them to be happy.” 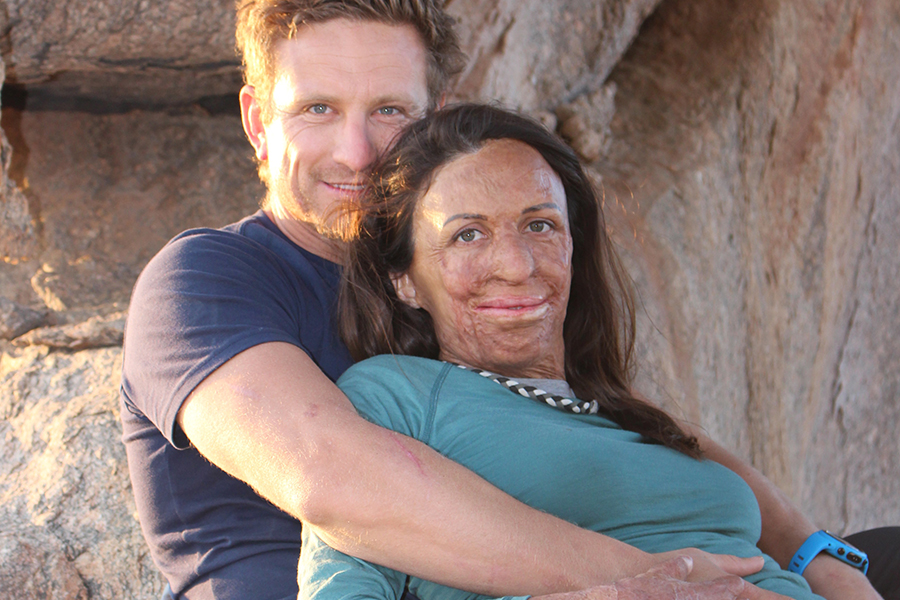 You know her story. On September 2, 2011, when the starting siren blared for the Kimberley Ultramarathon, Turia Pitt was one of just 40 runners with 100kms of gruelling Kimberley terrain ahead of them. But a few hours later, she was trapped in an out-of-control bush fire and received burns to 70% of her body. She went from having everything to live for, to fighting for her life. Six years on, Turia and her partner Michael recently announced they’re pregnant with their first child – a boy, due in December.

I remind myself of that if I’m feeling really overwhelmed, or if I feel like I’m not getting enough done. It’s a good reminder that all I need to do is keep being persistent and taking the steps no matter how small they might be, and then over time, I’ll start to see a difference. It’s not about taking huge steps or making giant gains – it’s the incremental work you do day in days out that all adds up.

The other quote I love is, “If you think you’re too small to make a difference, try sleeping with a mosquito.”

I always remind myself of that, particularly with my online courses and ebooks and even my fundraising. Sometimes I feel like I’m not doing enough, but this quote reminds me that one person does have an incredible ability to make an impact on the world.

I loved engineering and science. I loved the challenge of it, and working in such remote locations of Australia like The Kimberley.

But change is inevitable in life – for people and even for businesses. If they can’t adapt with the times, they might be left behind. Never say never, but I don’t think I’ll ever go back to engineering.

I love what I do now, I love inspiring people, and I love helping people with their mindset and hearing about what a difference it’s made for them. I love having parents tell me that their kids look up to me. You don’t hear that every day as a mining engineer!

I don’t think anyone really achieves anything on their own – you’ve got to have a great team of support people around you.

I had an amazing medical team – my doctors, surgeons and physios (who were really heartless!), but I also had an emotional support crew – my partner Michael, my mum, dad and my brothers. I got a lot of support, and I guess therefore strength from those around me.

So as much as it was me that had to do the work, I wouldn’t have been able to do it without the people around me.

It’s not like I had an epiphany at some point when I turned it around and realised I was going to get through everything. My journey wasn’t like that at all.

I did the same with my Ironman training. Some days I didn’t think I was making progress, but when I looked back to see how far I’d come, I could see I was faster, I was fitter and stronger.

So it’s not about jumping out of bed, doing a superwoman pose and telling yourself that you’re strong and motivated and you’re ready to take on every day. It’s not that exciting!

I think it’s more about reminding yourself that things don’t happen overnight, committing to the grind, doing the work and taking the small steps that need to be taken every single day.

What got me through was applying myself and being really persistent and probably a bit stubborn with it. If I couldn’t do something one day, I’d just have to try again the next day. 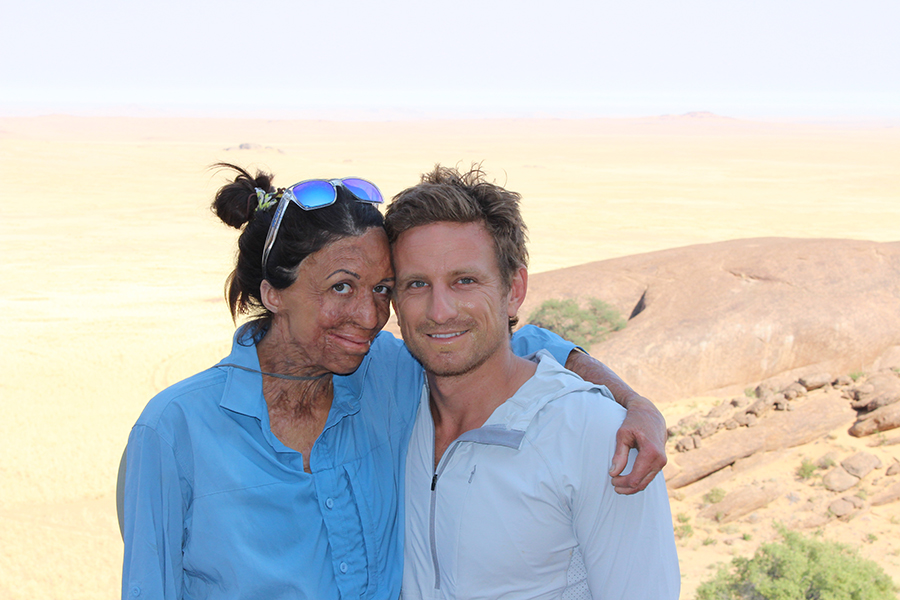 What got me through my darkest days was my emotional support crew.

But there’s something I always do when I’m struggling in any area of my life –  property, finances, my business, Ironman, my recovery.

It’s a really simple step that anyone can do. The very first thing I always do is start gathering information.

So in my recovery, I asked Michael to go to our local bookshop and get anything that was ‘inspirational.’ I read the stories of people like Sam Bailey, Janine Shepherd, and Katie Piper. I watched ‘inspirational’ true story movies about other people who’d overcome their adversity – like Touching the Void and The Diving Bell and the Butterfly.

My biggest test so far was a moment in hospital when I had to re-learn how to stand.

I’d just come out of a month-long coma, and my skin was still burnt raw, so any small movement was excruciating. Even just to breathe, it felt like a layer of my skin was being peeled away. Despite all that pain, my doctors wanted me to get moving as soon as possible. So on this day, four physios came into my room – I had one of either side of me, one behind me supporting my back and head and neck, and one in front of me, kind of physically pulling me to my feet.

I could hear my pulse on the heart rate monitor, and it was through the roof. I don’t think it’s ever been higher.

So I’d been burnt running in a 100km ultramarathon, and now I literally didn’t have the strength to stand on my own two feet. I think that was probably the hardest point of the whole thing.

Because if I couldn’t even stand up by myself, how was I going to be able to walk, run again, compete again, go back to work, have a family with Michael?  All that stuff was suddenly so far out of my grasp, and it really hit me then that my recovery wasn’t going to take weeks or even months. It was going to take years for me to get my life back.

While I was in hospital, I really looked up to Sam Bailey.

He had a car crash when he was 18 and became a quadriplegic. He’s still a successful farmer and also a helicopter pilot and inspirational speaker. He really gave me proof that it was possible to rebuild your life.

What scares me the most is the idea of stagnating.

That’s part of the reason why I like challenging myself and pushing myself and running my own business and trying new things. The idea of having every day for the rest of my life doing the same thing, and having the same job, and being in the same place – I actually find that quite terrifying.

People always ask me if Michael has a brother. Ha!

Wherever I go though, adults and teenagers all want to know how they can be more confident and resilient, and how to get through those hard times.

I think it’s really important for people to know, particularly for kids and teenagers, that even though there’s plenty of great days in life, the bad days are also inevitable. It’s normal, they’re part of life and we all have them. The sooner we can embrace that and learn some tools to help get us through them, the better off we’ll be.

It’s the focus of my new eBook for teens Good Selfie. I answer the questions I get asked most by teenagers everywhere I go – questions on how they can be more confident, how to deal with bad days and what to do when they feel like they’re struggling. It’s also got all my best tips that got me through, and simple strategies that help me deal with life’s ups and downs to this day.

As much as we can surround ourselves with like minded and amazing people, and as much as we can create a really good support team for ourselves, at the end of the day whatever you’re trying to achieve in life, you’re the one who actually has to do the work.

So with Ironman, I had a great team – a brilliant coach, a great physio to help me with my injuries, Michael who would make me dinner, my mum for everything in between – I had all these great people around me. But I was the one who had to get up so early in the morning to do my training, make sure I ate the enough of the right food, do my stretches, get enough sleep, juggle work and my other training sessions in the day.

I really think it rests on your shoulders, and it’s really empowering to realise that – you’ve got the responsibility of your own life. You get to call the shots, and you get to make the hard decisions as well. 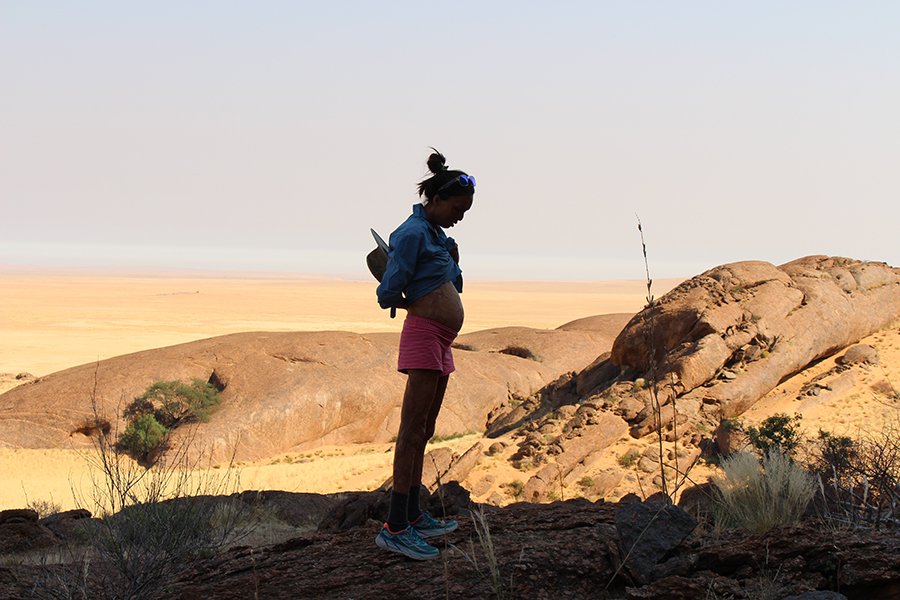 I don’t think motherhood will be a bigger test than what I’ve already faced, if I’m looking at it through my engineering brain.

I know there will be some really big challenges as part of being a mum, but I feel like I’ve faced lots of challenges so far and always come through. But maybe ask me next year when my little boy is keeping me up in the middle of the night, and I haven’t had any sleep, I’ll probably say, ‘Yeah it’s really hard!’

I can’t wait to meet my son.

My priorities have started shifting a little and I don’t think that’s a bad thing. I think I’ll have a greater perspective on work-life balance. Having said that, I still believe that looking after myself, achieving my personal goals, doing things for myself including my work are all really important because that’s part of me and part of my identity.

There’s this idea that, as a parent, all we want for our kids is for them to be happy.

But all of that stuff is inevitable – there’s just no way we can guarantee that our kids will be happy 100% of the time. We all face challenges in our life.

Part of living is accepting that we’re going to face times that are stressful and hard, and very often, those things will be completely outside our control.

The main thing I want to impart on my son is resilience – the belief that he not only will go through hard times, but that he can.

Because of what I’ve been through I know that I can get through hard times and I know that I’m capable of anything I put my mind to. That’s what tough times teach us.

Each time I go through a tough time in my life now, I think “I’ve had tough times before, and I’ve survived them – I’m gonna survive this one too.”

I want my son to know that the hard times he faces aren’t going to weaken him – they’re going to make him stronger.

We asked 7 women what they know about 'strength'

“Strength to me is coming together, it’s about solidarity with other women.” We asked seven successful women what they know about 'strength'

Our interview with Turia is part of the ongoing partnership between Business Chicks and Truvée. With a shared philosophy of the power and potential of women working together, both brands are passionate about celebrating women who follow their passions and go after what matters most.

For women who are pregnant or planning a pregnancy, not drinking is the safest option.