Why winning a Telstra Business Women’s Award was a career defining moment for Jenny Paradiso. 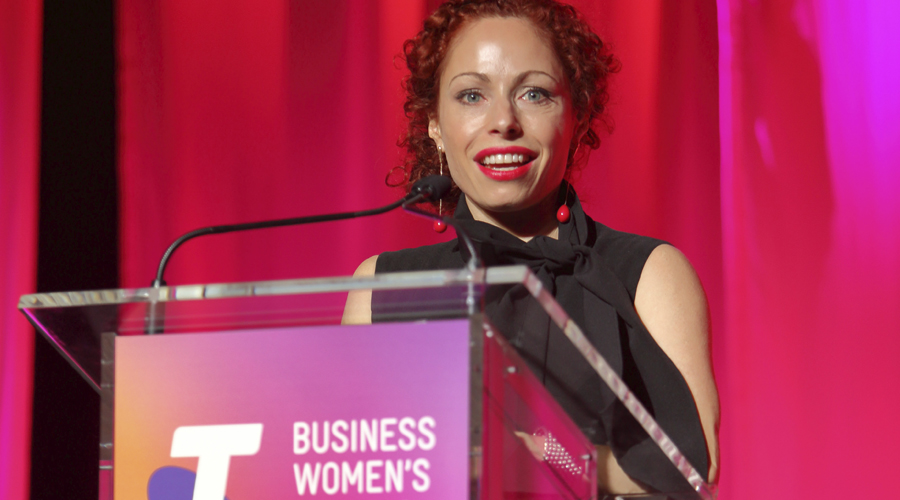 “I really just wanted them to be able to see the diverse group of women out here. I wanted them to know that it wasn’t just their mum doing these things and they could achieve in any area that they wanted to put their heart towards. I think that was really important for them to see that, regardless of whether I managed to get up here or not.”

Those were the words Suntrix co-founder and 2016 Telstra Australian Business Women’s Entrepreneur Award winner Jenny Paradiso spoke to a room full of people in her acceptance speech last year.

My first career was as a librarian – that’s probably something you didn’t know about me! I worked in the library industry, both public and private for over 15 years and it’s an industry full of strong, career-driven women.

Within my own naïve little library bubble – where nearly all employees were female- I never once felt that I couldn’t achieve my goals or progress my career because I was a woman. But that bubble was popped when I moved from libraries to solar in 2009. It was a reality check for me in some ways. I was used to being an expert in my field. I was a young female learning the lingo that goes with the electrical world – voltage drops, monocrystalline vs polycrystalline, network protection and more.

As a short female with curly hair I found I needed to prove myself before I was taken seriously, while I perceived that a male in my position would more likely be accepted without question.

Physical attributes aside, I really just want to be treated the same as anyone else in my field, male or female. I don’t want special treatment or recognition because I’m female, but I think until we reach that equal status in regards to opportunity, career advancement and work-life balance, initiatives like the Telstra Business Women’s Awards are vital.

At the beginning, I was very careful to keep my family life separate from work and would never talk about my children or parental duties with business colleagues. Now, eight years on, I’m more open about scheduling business meetings around my children’s commitments and make no apology for my dual role as mother and business owner.

I’ve heard many horror stories from female colleagues in business – being passed up for promotions, being paid less than their male counterparts, losing jobs when wanting to work part-time after children – the whole lot. However, I’ve also heard many positive stories and I have experienced these positives myself.

My daughters, Violet and Mabel, are part of my life, and I’m thankful I have a career that allows me to juggle these priorities and I try to pass this flexibility on to my team.

In 2016, I had the privilege of winning both the Australian and South Australian Telstra Business Women’s Entrepreneur Award. The awards are an important, long-standing initiative to help recognise the diverse success of women in business.

Though it was well past their bedtime, my daughters donned their best outfits (and best behaviour) and joined me at the Telstra South Australian Business Women’s Awards.

I wanted desperately for them to see the diverse group of women nominated for the awards. I wanted them to know that it wasn’t just their mum doing these things and that they could achieve in any area their passion and purpose led them. I wanted them to go to school the next day and share the stories of the hairdresser and the physiotherapist and the café owner, with their friends – both girls and boys.

Accepting the award last year sits at the very top of my career highlights, but I am openly looking forward to the day when women’s awards are no longer needed in Australia and around the world.

I dream of the day when my adult daughters (currently six and eight) ask me about women’s awards with awe and incredibility, similar to my wonder as a child that we could ever have lived in a world where women were forbidden to vote or denied their own bank account. But until then we need initiatives like the Telstra Business Women’s Awards, because it gives my daughters an insight into what they can achieve.

I do think we have come a long way already, with many companies and boards setting gender diversity targets and flexible working arrangements designed to assist parents manage family and careers. But we’ve also got a long way to go.

Head to https://www.telstrabusinesswomensawards.com/nominate/ for more details.