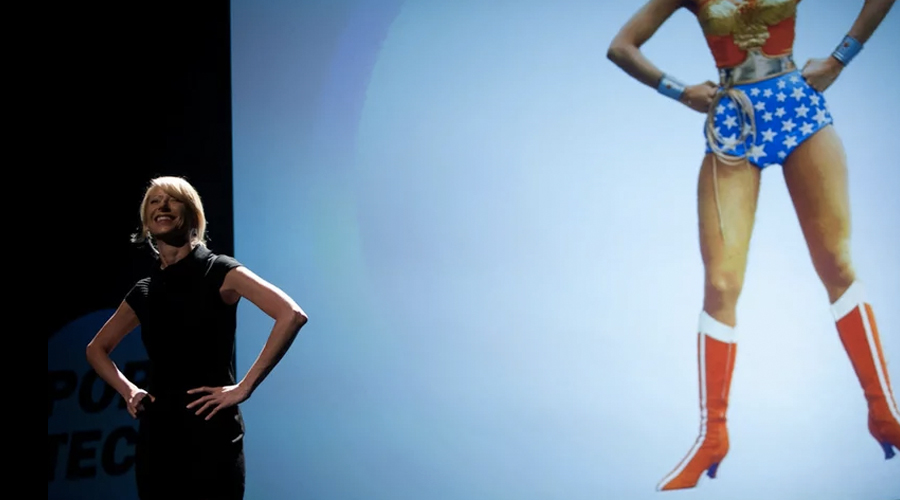 Think about how you’re sitting right now. Is your chin resting on your hand? Are you slouching at your desk? Is your neck bent hunched over your iPhone?

We were all taught the importance of good posture growing up, but it was Harvard Business professor and social psychologist, Amy Cuddy who brought body language back into the limelight with her now famous TED Talk. ‘Your Body Language Shapes Who You Are’ is the second most viewed TED Talk of all time, with over 41 million views (only beaten by Sir Ken Robinson’s ‘How Schools Kill Creativity’ in the No. 1 spot).

As a social psychologist at Harvard Business School, Cuddy’s interest lies in how the nonverbal expressions of power and dominance play out in corporations around the world.

In developing her research, Cuddy studied the body language of her MBA students at Harvard and noticed two distinct things. One, male students would often physically take up more space with their bodies, and confidently shoot their hands up when answering questions, and women did the opposite – they often made themselves smaller in class, and would only half-raise their arms when answering questions.

“Women are much more likely to do this kind of thing than men. Women feel chronically less powerful than men, so this is not surprising,” says Cuddy. “These postures are associated with powerlessness and intimidation and keep people back from expressing who they really are.”

Cuddy also found that body language was related to the extent to which students were participating too. The “alpha” confident ones were highly engaged and did well, and the more withdrawn students were not. As participation counted for half of the grade, this was Cuddy’s lightbulb moment. If you had a group of equally qualified women and men, yet they scored such different grades because of participation, is it possible to get people to fake it by assuming more dominant body poses, and could it lead them to participate more?

We’ve all heard the adage, ‘Fake it til you make it.’ But Amy’s research delved into whether or not we could, ‘Fake it ‘til we become it.’ She found that adopting certain “power poses” could affect the way you’re perceived in situations like job interviews and meetings, and that had the ability to influence whether or not you got the job or promotion. Not only that, but the hormonal changes that take place when doing a “power pose” not only change how others perceive us, but how we perceive ourselves.

Faking it is a principle Cuddy knows well. In her TedTalk, she tells the story of how she recovered from a terrible car accident at age 19. She woke up in the head injury rehab ward, had been withdrawn from college, and was told, “You’re not going to finish college. Just, you know, there are other things for you to do, but that’s not going to work out for you.”

She hustled to get back into college and ended up at Princeton. When she had to deliver her first presentation, suffering from a major case of impostor syndrome she went to her advisor and told her she was quitting. Her advisor said to her, “You are not quitting because I took a gamble on you, and you’re staying. You’re going to stay, and this is what you’re going to do. You are going to fake it.You’re going to do every talk that you ever get asked to do. You’re just going to do it and do it and do it, even if you’re terrified and just paralyzed and having an out-of-body experience, until you have this moment where you say, ‘Oh my gosh, I’m doing it. Like, I have become this. I am actually doing this.'”

In her first year teaching at Harvard, Cuddy gave the exact same advice to one of her first-year female students. It was the moment that Cuddy realised she wasn’t pretending anymore; she hadn’t just faked it ’til she made it, she’d faked it ’til she became it.

We have been hustling behind the scenes to bring Amy Cuddy to the Business Chicks stage for years, and we are beyond excited to announce she’ll be running a series of exclusive workshops in July. So straighten that spine, draw your shoulders down and bust out your best Wonder Woman stance, because this is a once in a lifetime opportunity.